Looking to Catch a Bird?

Welcome to a new edition of SoundCzech, Radio Prague’s Czech language course in which you can learn Czech phrases with the help of song lyrics. Some days you may find yourself being convinced to do something, perhaps against your better judgement. If so, the Czech band ‘Kabát’ or ‘The Coat’ has just the song for you called Když ptáčka lapají. 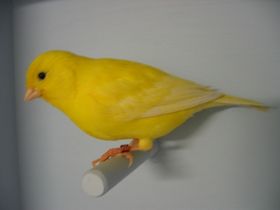 Photo: Cédric Courbois / Public Domain In Czech you will often hear the saying když ptáčka lapají, pěkně mu zpívají – when they are trying to trap a bird, they sing to him nicely. In other words, they are ready to tell the bird whatever it is that he wants to hear in order to get their way.

Kabát sings that “když ptáčka lapají, pěkně mu zpívají a v jednom kuse lžou.” This means that people often lie to get what they want. A liar, or a lhář, who makes empty promises which later lead to unrealistic expectations is said to be painting magpies on a willow tree - maluje straky na vrbě.

If someone promises you the world in return for a favor, you can say “on mně sliboval hory doly,” meaning that “he promised me the mountains and the valleys.” You may also use the expression “he promised me the blue from the sky” -“sliboval mi modré z nebe.”

If you are not cautious enough you may fall into a trap – spadnout do pasti –or to use a more common expression – naletět – which means to fall for something. Ušil na mně boudu means –he set a trap for me and sežral jsem mu to i s navijákem – means I swallowed the bait with the reel. In that case you can say zůstali mi jen oči pro pláč – all I had left was eyes to cry with.