Hello and welcome to Czech by Numbers, Radio Prague's Czech language series in which we look at the use of numbers in everyday speech. Today we will be looking at what you need to know when shopping for clothes in the Czech Republic.

The expression for shoe size is číslo bot, literally a "shoe number", or velikost bot which means size. At least three different systems have been in place in the last few decades. What is now women's size 39 - třicet devět, was not so long ago called 25 - dvacet pět or even 5 - pět. The usual way to describe your shoe size is to say: Mám nohu devětatřicítku. "My foot is a thirty-nine."

The same goes for clothes. With more and more items imported from different parts of the world, you can come across various numbering systems on the labels. A very common women's size is size 38 - třicet osm, which is a 12 in the United Kingdom or approximately an M - in Czech pronounced as em or emko. The best way to tell a shop assistant that you wear size 38 is to say: Mám osmatřicítku - literally "I have number 38".

The most common sizes are called konfekční velikosti - which can be translated as ready-to-wear sizes. Those outside that category are nadměrné velikosti - extra large sizes and there are special shops with that name selling both clothes and shoes.

In our earlier lessons we have mentioned bra sizes, from zero to six, terms which are sometimes still used to describe the size of a woman's breasts. For example trojky would be C-cup breasts. But this numbering is no longer used by manufacturers in this country.

As regards sizes, you can often come across the cliché devadesát-šedesát-devadesát - ninety-sixty-ninety, meaning centimetres around the chest, waist and hips, describing some people's idea of the ideal female figure.

And that's all we have time for now but we'll be back next week. Till then, na shledanou. 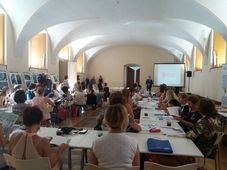 This week Prague has been hosting the 11th International Conference of Czech Schools Abroad. The regular event is organised by the… Charles University academic Ivana Bozděchová has taught Czech and Czech Studies in several corners of the world, including in the United…