A. J. P. Taylor (1906-1990) was one of the best-known and most influential British historians of the 20th century. He is remembered in particular for his provocative left-wing political views and his conviction that German history made the country uniquely inclined towards aggression and expansionism. This made him an ardent opponent of attempts to rebuild Germany’s economy after the war, and a strong supporter of Czechoslovakia’s growing alliance with the Soviet Union. In July 1946, just after elections which saw the Communists emerge as the strongest single party, Taylor visited Czechoslovakia.

Here is an extract from a talk he gave for Czechoslovak Radio – which with the benefit of hindsight seems strikingly naïve:

“For the first time in any country there is a communist prime minister who has reached his position by strictly democratic methods. On the other hand, this is not a communist government. It’s a coalition and the Communists have not got a majority in parliament. They’re the biggest single party, and even if they haven’t got the power, they have, I think, the biggest share of the responsibility. That is an important difference. It means that in future the communists are going to be blamed if things go wrong instead of being able to blame others. They are going to have to use their popularity not to make difficulties, but now in order to get things done.”

Just like his compatriot J. B. Priestley, whom we heard last week, A. J. P. Taylor failed to recognize that Czechoslovakia was on the brink of returning to totalitarian rule. He saw the greatest threat to the country not in Stalin’s Soviet Union, but in the possibility of a resurgent Germany.

“The Czechs have had seven years of German occupation and they would pay any price not to have it again. That is the reason for the Russian alliance, which is supported by everyone in the country of whatever class and whatever party. As the prime minister said in his speech the other day: ‘The Russian alliance is for us not merely a question of safety, but even of existence.’ If a great Germany is ever restored, Czech democracy and Czech independence will again be lost.”

At the time when Taylor was in Prague - in the summer of 1946 - the expulsion of Czechoslovakia’s German-speaking minority was already well under way. In one of the most drastic and controversial transfers of population anywhere in peacetime history, three million German-speakers were expelled to Germany and Austria. Britain and the United States both had misgivings about the policy, but A. J. P. Taylor was vehement in his support. 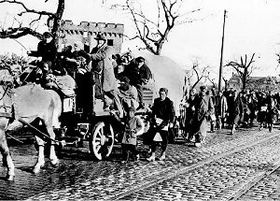 “No-one who has seen and heard what the Germans did in this country can doubt that it is impossible now to keep Germans here as citizens. This terror wasn’t the act of a few SS men. It was really the expression of the spirit of a whole people. The Germans have to go. But their transfer is being organized as decently and humanely as possible, and all the same the great majority of Czechs don’t like it. They don’t like the whole thing. They feel it is a defeat for the principles which they tried to defend, a defeat imposed on them by Hitler, but a defeat all the same. They are ashamed, as we in England are also ashamed at many of the methods we had to use in order to win the war.”

To this day the expulsion of the Sudeten Germans remains a sensitive topic, and only since 1989 has real debate about the expulsions and their consequences got under way.