After Palach: fears and hopes

In last week’s From the Archives we followed the tragic last days of the student Jan Palach, who on January 16 1969 set himself alight in protest against growing apathy in the face of the Soviet invasion five months earlier. The whole country was in shock. Such a drastic and violent sacrifice had little precedent in modern Czech and Slovak history, and perhaps for just that reason Palach immediately became a symbol of the country’s lost liberty and a rallying cry for those who still hoped to save something of the reforms of 1968. Those in power had to be cautious; they were well aware that Palach’s legacy could be explosive. Demonstration in front of Charles University, January 20 1969, photo: Security Services Archive Immediately after his death on January 19, there were huge demonstrations in Prague. One of those who led the protests was the young student activist, Jan Kavan, who 30 years later and in very different times was to become the Czech Republic’s foreign minister.

“We are prepared to fight for his demands, for a change in the atmosphere which led him to take such a decision… Our first answer was to organize the first demonstrations. 150,000 young people took part in the demonstration and tens and thousands of the Prague population were in the streets waiting for it.”

Czechoslovakia’s President Ludvík Svoboda, was in a difficult position, and his hands were shaking as he addressed Czechoslovak Television viewers one day after Palach’s death. He began by saying that, as a soldier, he admired Palach’s courage, but he warned people not to use his sacrifice as a starting point for further protests.

“It takes just a small spark to start a great fire, which can cost thousands of lives. I beg you not to underestimate that danger.”

One of those who spoke out with a very different message, was Václav Havel, at the time already one of the most active and articulate campaigners for democratic reform. Unsurprisingly, his words were not aired by Czechoslovak television or radio.

“Jan Palach’s act is an extreme expression of the pain we all feel, one man crying out on behalf of us all. This is also the reason why it is a deliberate political act. The only right way to respond is in the spirit in which it was intended, as an appeal for activity, for a real struggle for all that we sincerely consider to be right, as a warning against apathy, scepticism or despair.”

And here is an unnamed friend and fellow student of Palach, with a further warning. 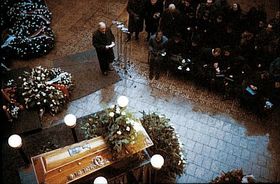 Palach’s funeral, photo: Security Services Archive “We have the impression - and there are clear signs - that some people are trying to distort and misuse this case, by suggesting that this student was a psychopath or something like that. As his fellow students and student representatives, we totally reject that. We know that he was a very rational and thoughtful young man, and that anything like that is quite out of the question.”

For Jan Palach’s funeral on January 25 1969, many thousands took to the streets of Prague. Several politicians and public figures spoke, promising to respect his legacy, a promise that was severely compromised in the years that followed. His fellow student, Zdeněk Touš, also spoke.

“In the name of students and all honest people in this country, I swear that we shall never give in or betray you, that we shall continue our struggle until we have achieved your and our idea of life in freedom.”

Over the next twenty years, freedom in Czechoslovakia continued to be pared down, but Jan Palach was not forgotten. It was in his name that students once again took to the streets in January 1989, a foretaste of the Velvet Revolution.