In the course of 1968 the Soviet Union made it increasingly clear that it disapproved strongly of the Prague Spring reforms. Yet, despite mounting tensions with Moscow, the Soviet led invasion on the night from August 20-21 1968, came as a huge shock. Today we are going to hear some of the broadcasts from that fateful day. We start with Radio Moscow, with an official Soviet version of events. 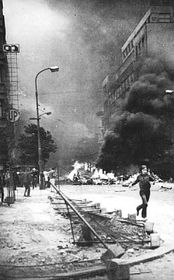 August 1968 in Prague “State officials of the Czechoslovak Socialist Republic have asked the Soviet Union and other allied states to give the fraternal Czechoslovak people urgent assistance, including assistance with armed forces.”

Broadcasts on Czechoslovak Radio could not have been more different. As Soviet tanks gathered outside the radio building, reporters did their best to carry on broadcasting. The radio’s Jiří Dienstbier (later to become Czechoslovakia’s first post-communist foreign minister) called on listeners not to risk their lives by gathering outside the radio building. He added that the Foreign Ministry had asked the radio to broadcast a message that the borders of Czechoslovakia had been broken illegally and against the will of the state and the party. At the same time he appealed to people not to try to resist the invaders.

Jiří Dienstbier ended with a warning that broadcasts would soon be forced off the air, as Soviet troops were massing in front of the building.

The Czechoslovak President Ludvík Svoboda also recorded a message for the radio. His voice shook as he spoke. He too stressed that the occupation was being carried out against the will of the Czechoslovak government. In a tone of near despair he said he would do all he could to ensure that foreign troops left.

At the same time Radio Prague and other Czechoslovak radio stations tried to get the message across abroad. Here is an unidentified station in English:

“We appeal to all radio stations in Romania, Yugoslavia. Please inform about the situation in the Czechoslovak Socialist Republic.”

And the local station in České Budějovice appealed in German to soldiers from the East German People’s Army to turn back – in the name of international workers’ solidarity.

But by now, there was no turning back.

The episode featured today was first broadcast on January 29, 2009.