“Biggest of all is human freedom”: Jaroslav Hutka and the Velvet Revolution

Last week we heard how a song, Marta Kubišová’s “A Prayer for Marta”, came to symbolize the period of the Velvet Revolution. But there were other songs and singers who also captured the spirit of the time. One of them was Jaroslav Hutka. After signing Charter 77, he had been bullied into exile in 1978, and all his songs and recordings banned. As soon as the revolution of November 1989 began, he came back home, and in one of the most moving moments of the period, he appeared at the vast demonstration held on Prague’s Letná Plain on November 25. 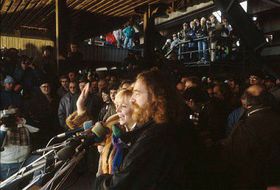 Jaroslav Hutka sings at the demonstration on Prague’s Letná Plain in November 1989, photo: CTK “Hutka, Hutka,” shouted the crowd - a staggering 800,000 people had gathered in park - as the singer came onto the stage with his guitar. And it was a sign of how far the revolution had come since the police had clamped down on the first demonstration on November 17, that the whole event was broadcast live by Czechoslovak Television. There was silence, as Jaroslav Hutka broke into song.

The words that he sang are worth translating in full. They capture much of the spirit of the time – its euphoria, its moral clarity and its - perhaps naïve - optimism. Hutka wrote the song back in 1973, and it has more than a hint of nostalgia for the hopes of the 1960s that were dashed by the Soviet tanks of 1968. All this was part of the inimitable atmosphere of November 1989.