Bombs over Prague and Brno

The scene is Prague. It is just before midday on St Valentine’s Day, February 14, 1945. An air-raid siren begins to wail. In previous weeks, Czechs have got used to the sirens, as Allied bombers have launched raid after raid on German cities, but so far the German-occupied Czech capital has been spared. This time it is different. Not long after the sirens stop a fleet of American Flying Fortresses appears in the skies. 152 tons of bombs are dropped on the densely populated centre of the city. The result is 701 people killed and over a thousand injured.

The bombing was probably a mistake, as a huge raid on nearby Dresden was under way at the same time, but it gave the German occupiers a perfect opportunity to turn the raid into a propaganda coup.

The next day Protectorate radio reported from the scene. “Yesterday, we fully understood the meaning of the word terror,” the reporter declared, and went on to describe a city café where dozens of unidentified bodies were lying, burnt or dug out from the ruins. Some buildings were still ablaze.

A few days later, the dead were buried, and the mass funeral was a big propaganda opportunity. The reporter described how the city’s Nazi officials stood with their right arms raised in a Hitler salute as the dead were buried in their simple wooden coffins.

While the bombing of Prague was a mistake, air raids on some of the heavily industrial towns and cities of the Protectorate most definitely were not. The radio archives include a recording from Brno, the Czech Republic’s second city, announcing first in German and then in Czech that it is suspending broadcasts, as “enemy” aircraft are approaching.

In a series of air raids by the Americans and the Soviets in 1944 and 1945, Brno suffered considerable damage – in residential as well as industrial areas. 1,200 people lost their lives, and over 12,000 buildings were damaged.

Saturday is the 70th anniversary of one of the blackest days experienced by the Czech lands during WWII, when US planes dropped some… 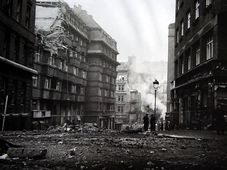 The bombing of Prague from a new perspective

For all the suffering that Bohemia and Moravia endured during WWII, relatively little of the damage was physical. Prague escaped the… 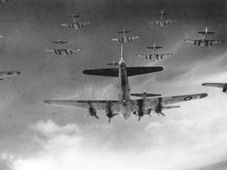 Bombs over Prague and Brno

The scene is Prague. It is just before midday on St Valentine’s Day, February 14, 1945. An air-raid siren begins to wail. In previous…