Czechoslovakia’s Second Republic: a vain attempt to put the pieces together

The six months leading up to the German occupation of Bohemia and Moravia in March 1939 were a strange period. After Germany, Poland and Hungary had annexed over a quarter of the country’s territory as a result of the Munich Agreement in September 1938, it was hard to see how the rump Czechoslovakia – the so-called “Second Republic” - could keep going. But Radio Prague’s shortwave broadcasts continued, and not surprisingly they focused on sustaining the much shaken international confidence in the country. Here is the famous Czech professor and scholar of English literature, Otakar Vočadlo, talking in November 1938. “At the present hour, the Czechs, the Slovaks and the Ruthenes are at one in the common effort to undo, as far and as quickly as possible, the ravages caused by the fatal Munich decision, which was equal to a crushing military defeat in its terrible consequences. But, undaunted the Czechs start afresh, as they did so many times in the past, when their efforts have been interrupted by wars and persecution.”

The economic impact of the loss of territory was huge. Just to give one example - the country lost almost all its coal reserves overnight. Prague’s shortwave broadcasts, through the familiar voice of their presenter Oswald Bamborough – did not shy away from pointing to the scale of the crisis. 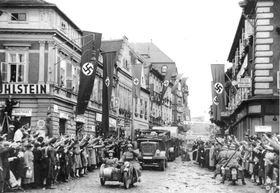 Photo: Wikimedia Commons / PD “The change of the thousand-year-old boundaries of Czechoslovakia will not be without serious consequences for the whole economic structure of our new state. The results are catastrophic for our national economic system, but it is necessary to face the situation as it is and to improve our working methods in industry and agriculture within the frontiers of our new state.”

Under the circumstances, the following appeal by the industrialist Jindřich Waldes to Britain and America to keep investing in the country has more than a hint of wishful thinking. 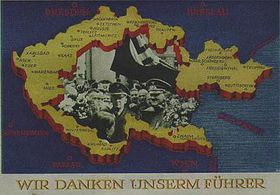 “There is no branch in which Czechoslovakia cannot honorably compete with the whole world. There is no branch in which we cannot supply products of world famous standard. Czechoslovakia is a country which fully deserves your confidence and your sympathy, especially now, after her great sacrifice for world peace. We shall be glad if every one of you will help us to build our Czechoslovakia. We thank you in anticipation from our hearts, and ask you to support our heroic people.”

The Czech industrialist and celebrated patron of the arts, Jindřich Waldes, trying to rally confidence in the Czechoslovak economy in the bleak autumn of 1938. Jindřich Waldes’ subsequent fate was tragic. When Prague was occupied in March 1939, he was arrested by the Gestapo because of his Jewish roots and sent to Dachau and then Buchenwald. His family, who had escaped to America, paid a huge ransom for his release, but he died, mysteriously, before he reached the shores of the United States.