By 1944 Czechoslovakia’s liberation no longer seemed a distant prospect, as Nazi Germany’s enemies closed in from East and West. On June 6 1944 over 130,000 Allied troops landed on the beaches of Normandy. Later that same day, the Allied forces’ Supreme Commander Dwight Eisenhower, took to the airwaves: 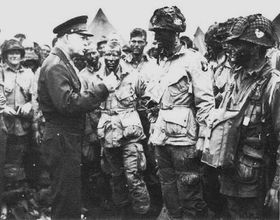 General Dwight D. Eisenhower, photo: U.S. National Archives “People of Western Europe. A landing was made this morning on the coast of France by troops of the Allied Expeditionary Force. This landing is part of a concerted United Nations [ie Allied] plan for the liberation of Europe, made in conjunction with our great Russian allies. I have this message for all of you. Although the initial assault may not have been made in your own country, the hour of your liberation is approaching.”

Czechoslovak participation was initially limited mainly to the air, but a few weeks later, the British-based Czechoslovak 1st Armoured Brigade was deployed: its mission to besiege the German-held French port of Dunkerque. It was to the Czechoslovak Brigade that the German garrison was eventually to surrender right at the end of the war in May 1945.

“This is a Czechoslovak government dispatch, recorded at Dunkerque on January 21, describing the visit of Red Army men…”

In January 1945, the Czech language section of the BBC came to visit the Czechoslovak troops outside Dunkerque, where they had been joined by over 800 Red Army men. The Soviet commander opened proceedings with a greeting in Russian, speaking of the friendship between the Soviet and Czechoslovak peoples.

His men were Soviet soldiers who had escaped from German prison and labour camps in Holland and Belgium, and had managed to survive in hiding or in the underground resistance until they were liberated. Now they were getting ready to go home, and the Czechoslovak troops in France wanted to thank them for the Red Army’s victories on the Eastern Front. The celebrations were loud and enthusiastic, with a good deal of singing – all still preserved on the recording. 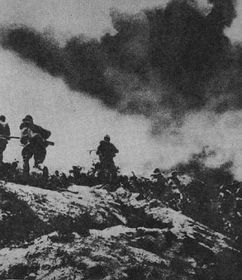 Dukla Nearly 2,000 miles to the east the Nazi empire was also shrinking fast. In Slovakia, the town of Banská Bystrica became the focus of the Slovak National Uprising that broke out at the end of August 1944, when Slovaks rebelled against the Nazis.

Radio played a role in rallying Slovaks to join the rebellion - with speakers appealing to citizens and army reservists. Several recordings are preserved in our archives.

At the same time the Red Army, including over 16,000 Czechoslovak troops was approaching from the north and east. Soviet radio, through the voice of its legendary broadcaster, Yuri Levitan, informed of the Red Army’s advances as troops entered Czechoslovak territory.

But the Red Army offensive was to meet far tougher German resistance than had been expected and the Dukla-Prešov operation was to prove one of the bloodiest in the history the Eastern Front. In the two-month campaign 21,000 Soviet troops lost their lives along with nearly two thousand Czechoslovak soldiers.