In last week’s From the Archives we featured Martin Luther King, interviewed by Czechoslovak Radio in 1963. But Dr King was not the first civil rights campaigner to address Czech and Slovak radio listeners. Four years earlier, in June 1959, Paul Robeson came to Prague, to take part in an international left-wing cultural congress. Robeson was a man of many talents – singer, actor, athlete, writer and civil rights activist. He never concealed his sympathies with the communist regimes of the Eastern Bloc, and his political views – combined with the colour of his skin – earned him virtual pariah status in many sections of the US political establishment. This culminated in 1950 when he was refused a passport.

But at the Prague congress in 1959 – with the Cold War at its height - Robeson was given a rapturous welcome. He opened his talk by greeting the audience in Czech.

“Jak se máte? [How are you?] It is a great privilege and pleasure to be here with you again in Prague, to greet my dear friends, the people of Czechoslovakia and to great you, many friends from many lands. My deepest thanks for your concerns over many years, for your help, for your encouragement”

In his speech Robeson went on to argue that great art comes from the people, and he pointed to a couple of Czech examples: the composer Leoš Janáček, who tried to incorporate the rhythms of natural speech into his music, and then Antonín Dvořák, who famously took inspiration from African American music.

“Your great Dvořák came to our land and heard the beautiful songs of my folk, and pointed out to us in America that here was the basis of a great musical art, springing from a people who had been torn from Africa and brought in slavery to the lands of America. Your great composer came there and pointed out that this was the base and could be the base of great music, and proved it by a great symphony [“From the New World”] and by string quartets. His influence still has great importance in America today.”

And it was not long before he broke into song, this time in Russian, a language in which he was near fluent. This was not the first time Paul Robeson had sung in Prague. Back in May 1949, he had taken part in the Prague Spring music festival, as his wife Eslanda remembered in and interview for Czechoslovak Radio recorded in London in 1964.

In the nervous days of the Cold War art and politics were never far apart.

The episode featured today was first broadcast on December 4, 2008.

The Civil Rights Movement in the United States sent ripples around the world, not least in the Soviet Union and its satellites. In… 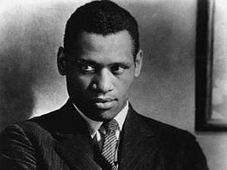