Rising tensions in the Sudetenland

“Hello, hello! Prague, Czechoslovakia calling. Good evening ladies and gentlemen”: Radio Prague welcomes listeners to its English programmes back in 1937. The tone may be a little more formal, but it is not so different from today. Yet much has changed since the troubled times of the later 1930s. Nazi Germany was breathing down Czechoslovakia’s neck and tensions in the mainly German-speaking Sudetenland were rising rapidly. The young British historian Hugh Seton Watson was in Czechoslovakia in September that year, attending an international summer school for students from across Central Europe. Talking to Radio Prague, he was far from optimistic about the country’s future. 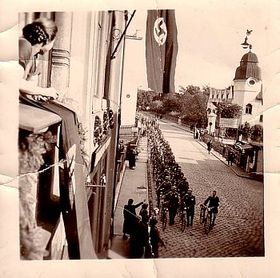 “She has many difficult problems to face, and among them the same problem of the rights of other nationalities, which the Austrian Empire failed to solve. For within her territories are three-and-a-half million Germans and half a million Hungarians. Since the rise of Hitler to power and since the slump, she has felt increasingly the need to work with her neighbours. Unfortunately the memory of the injustices they suffered in the past and the sense that they have won their freedom by their own struggle make it difficult for the Czech people to be conciliatory.”

Another British visitor at the time was Edgar Young, a First World War veteran, journalist and left-wing politician. At the end of 1936 he paid a visit to the Sudetenland, by that time dominated by the Nazi sympathizing Sudeten German Party, to see the situation for himself. He spoke to Radio Prague.

“Before Christmas I went for a journey through the district on the German border between Karlovy Vary – or Karlsbad – and Liberec – or Reichenberg – which are inhabited by a preponderance of German-speaking people. These districts, which are mainly industrial and which depended for their prosperity upon foreign trade, are suffering severely from the effects of the world economic crisis and of the increasing tendency towards autarchy. The sufferings of these Czechoslovak Germans are due in no small measure to the selfish economic policy of Germany and to the past unpatriotic actions of their own employers, who are mainly Germans of the opposition. Yet they are represented to the victims as being the fault of the Czechoslovak government. There are, nevertheless, even in these heavily ‘propaganda-ed’ districts considerable numbers of democratic Germans, who are loyally collaborating with the government, in which indeed they have their own representatives.

“The only sign which I saw anywhere of an oppressed minority was in a certain town, which shall remain nameless and which is a hotbed of anti-government agitation. There the minority of Czechs and democratic Germans are considerably terrorized by the dominant clique. Victimization for political views is common, and an unemployed man or woman finds it wiser in order to obtain employment to profess at least allegiance to the opposition German party.

“It was very noticeable, I have found, that as one gets away from the German frontier, the tension between Czechs and Germans relaxes. Thus, at Brno, which has a considerable German minority, the relations between the two races can only be described as cordial. There is hope, therefore, that the insistent friendliness of the democratic majority of the population, German no less than Czech, will eventually triumph over that hysteria which is at present causing so much heartburning among the three-and-a-quarter million German-speaking subjects of Czechoslovakia.”

The British journalist and politician Edgar Young, talking in February 1937. One thing that makes this recording particularly interesting is the insight it gives into the political pressures that Sudeten Germans themselves were under from their Nazi leaders. As we have seen so often in the pre-war recordings in this series, Edgar Young’s hopes of reconciliation proved tragically over-optimistic. 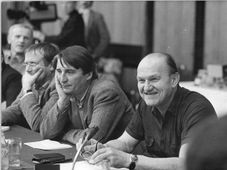 Franz Fühmann and the Sudetenland dreaming

Franz Fühmann (1922-1984) was one of East Germany’s most widely read writers. He is also one of few that have stood the test of time.…