The last days of Jan Palach

On the evening of January 16 1969, Czechoslovak Radio broadcast a disturbing item of news: “Today at around 3 pm, 21-year-old J.P., a student at the Philosophical Faculty suffered serious burns on Wenceslas Square. He poured an as yet unknown flammable liquid over himself and set his clothes alight resulting in severe burns.” 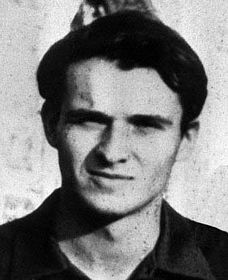 “In a letter that was found with him, he stated that through this act he wanted to express his disagreement with the distribution of propaganda and with censorship.”

The student was Jan Palach and his act of self immolation was an act of protest - not so much against the Soviet invasion of five months before as against the growing sense of apathy in Czechoslovakia in the face of the occupation. He wanted to shake his compatriots into action. With dreadful burns and slipping in and out of consciousness, Palach survived for another three days at the nearby Vinohrady Hospital. The psychiatrist Zdenka Kmuníčková spent some time at his bedside and recorded a few minutes of their conversation. Struggling to speak, he repeated why he had acted as he did.

“I wanted to express my disagreement with what is going on here and to make people wake up.”

In his letter, Palach had written that he was part of a group and that other “human torches” were to follow. Zdenka Kmuníčková – and others who visited him - tried to persuade him to make some kind of statement, so that others would not to follow his example. But on this point, Palach remained steadfast. “It is still possible,” he said, “but that all depends on what standpoint representatives of the government and the party adopt.”

A few hours before he died Palach asked to see the student leader Lubomír Holeček. By this time Palach was almost unable to speak, but Holeček was able to put together a statement, which he was allowed to read out on the radio. According to the statement, Palach had called on others not to follow him:

“My act fulfilled its role. But no-one else should follow me. Students should try to save themselves, and devote their lives to fulfilling our goals. They should fight alive.”

It is not entirely surprising that Palach had asked to see Holeček. A few days before his self-immolation he had sent Holeček a letter in which he had suggested that students should try to seize the Czechoslovak Radio building and broadcast appeals for a general strike. The letter, which was only rediscovered recently after nearly 40 years in secret police archives, is a potent reminder that Palach’s protest was not just a passive act of desperation, but an appeal to active political resistance.

On the afternoon of January 19, the radio announced that Jan Palach had died, succumbing to third degree burns on more than 85 percent of the surface of his body.