The nurse who treated the Führer

During the wartime occupation, German-language broadcasts from Prague were absorbed into the radio network of Nazi Germany, the so-called “Reichssender”. A number of archive recordings in German survive from the time. Most vivid and chilling among them are the long lists of names broadcast each day of Czechs arrested and executed. But there are also some propaganda curiosities. In June 1941, Prague’s German programme interviewed a nurse. She was living and working in the city, and remembered with great nostalgia one particular patient who had come into her care. This is how the broadcast began: 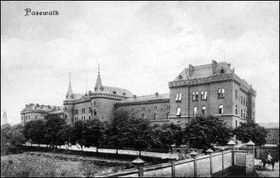 The announcer utters the Führer’s name in a tone of deepest reverence, and then ward-sister Anna goes on to recall her memories, with an evident sense of pride.

“On October 7 1918 I had to bring a transport with wounded soldiers from France to Pasewalk. One of them was Lance Corporal Adolf Hitler. On the train my thoughts were with him in particular. As often as I could, I sat by his bed, because his words about his comrades always brought comfort. He once said, ‘A new Germany must awaken’… His observation, when we said farewell and he left the field hospital was ‘Even though at the moment I am unable to see, I shall struggle to see within.’”

As a God-fearing Christian, ward-sister Anna is clearly a little bothered by the idea that Adolf Hitler might be anything less than a good Christian himself. Her tone becomes increasingly grotesque. 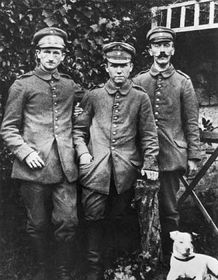 Adolf Hitler, right, during his stay in a military hospital in Pasewalk “I want to add that it’s not true, what people so often say about our Führer, that he has no faith. He is one of God’s chosen ones. On the belt buckle of each soldier I see the words ‘God with us’. If, back then, someone had said to me that Lance Corporal Adolf Hitler would one day become the Führer of a nation of eighty million, I might well have laughed, but you could tell from his character that this soldier was something special. There has never been anything like it in the history of the world”

She ends by describing a letter she wrote some years later, that reminds us of the hypnotic power that Hitler must have held over so many people at the time.

“In 1935, for the first time, I wrote to my beloved Führer: 'I must get this off my chest. My Führer, I could be your mother. How good it would be if a dear mother’s hand could run lovingly through your hair, because sometimes you seem so alone with all your worries. But no, my Führer, you are not alone. God and your whole nation love you.'”