Dry eye syndrome is among the most common diseases compelling people to visit an ophthalmologist. For milder forms of the disease, doctors prescribe over-the-counter eye drops. Researchers at the Brno University of Technology, together with a Czech biotech firm Contipro, are busy developing better “artificial tears”. 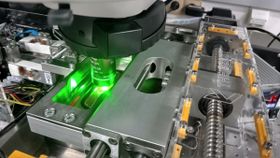 Photo: archive of Brno University of Technology Dry eyes can result from aging, allergies, taking certain medications, and a variety of environmental factors. But there is more to making artificial tears than, pardon the pun, meets the eye. Besides acting as a lubricant, some artificial tears promote healing while others evaporation. They may also contain thickening agents, which keep the solution on the surface longer. Getting the mix exactly right is an exacting science.

At the Brno University of Technology, scientists are exploring how a solution of a derivative of hyaluronic acid – a clear, gooey substance naturally produced by your body – can change the properties in different concentrations. Laboratory assistant Kateřina Kopecká explains:

“Hyaluronic acid is found mainly in the skin, in the vitreous, in the synovial fluid in the joints and in the fascia. We get it from fermented bacteria.”

And now in laypersons’ terms. Vitreous is a clear gel that fills the space between the lens and the retina of the eyeballs of humans and other vertebrates. Synovial fluid, or synovia, has an egg white–like consistency, which reduces friction between the articular cartilage of joints in motion.

Previously, such stuff was extracted from domestic rooster combs – the fleshy growth or crest on the top of the cockerel’s head. These days, these Brno researchers get a steady supply of the fermented bacteria equivalent from Czech biotech firm Contiro.

Examining the properties of such synthetic stuff is a surprisingly noisy affair, involving a device called a rheometer, which measure the way it flows in response to applied forces, as laboratory assistant Ondřej Štrympl demonstrated for Czech Radio.

“The shear friction is measured between two metal round plates. We rotate one plate against the other and examine the force required for the plate to rotate at a given speed.” 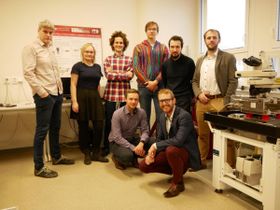 Martin Vrbka (left), photo: archive of Brno University of Technology Those tests help the Brno researchers determine the potential benefits of various derivatives of the gooey hyaluronic acid, which they supply to pharmaceutical companies not just in the Czech Republic but around the world.

Thanks to its lubricating and other properties, hyaluronic acid also plays a key role in a project in which the Czech-based firm Contipro cooperates with the Department of Design, Faculty of Mechanical Engineering, at the Brno University of Technology.

Biochemists work with experts in biotribology (a field studying the processes of friction, lubrication and wear in living organisms and at the interface between biological and artificial surfaces). The university and Contipro are working to develop a raw material for making artificial tears.

The first step is to create an experimental model of the human eye, says Martin Vrbka, the project manager at the Brno university.

“We will use medical silicone. We will simulate the eyeball with the help of a ball, on which we will drag the contact lens. It will perform a sliding movement against the medical silicone plate, which simulates the lid.”

In later phases, research will focus on the formation of a lubricating film, using fluorescence microscopy that marks its components with special fluorescent labels to see how the hyaluronic acid behaves, especially as regards friction.

All of which is promising news for suffers of dry eye syndrome – whose number are steadily increasing due to the number of hours a day typically spent gazing at a computer or mobile phone screen.