Milouš Jakeš, the last Communist Party general secretary of Czechoslovakia, has died at the age of 97, it was announced on Tuesday. For many, the tin-eared Jakeš came to symbolise Normalisation-era politics and the disconnect between party officials and the public. Many of his phrases have since been ingrained in Czech humour.

If there is one thing Milouš Jakeš was perhaps most famous for in the minds of the Czech public, it was his speech at Červený hrádek on June 17, 1989. An internal address to fellow Communist party functionaries, it was not meant to be heard by the wider population. But Czechoslovak Television technicians leaked the speech, and selected passages soon began being broadcast on Radio Free Europe.

Jakeš’s statement that the Communist Party must not be seen as a “fencepost” in the way of the public will would go on to become a popular ironic phrase during the Velvet Revolution. And Jakeš remains a largely ridiculed figure among the wider Czech public today, as an embodiment of tone deafness to the situation in the country at the time. 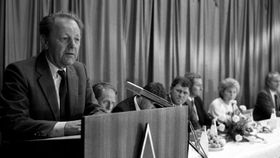 Milouš Jakeš, photo: Czech Television However, historian Petr Blažek says that it is also important to look beyond the popularised image of Jakeš.

“The other side of Milouš Jakeš is that he was a party functionary, a person who was connected with the Communist Party from 1945 onwards and served it in various functions.

“In the mid-1950s, he studied in Moscow where he met [Mikhail] Gorbachev. That helped him a lot. Moscow supported him in 1987 when he was elected Communist Party general secretary.

“Jakeš had already served in a number of functions, such as being in charge of the revision and control commission of the party, which carried out purges in the 1970s, and he helped the Soviets during the [1968] invasion.

“When he was making that comical speech, he was still leading a party that had no problem with cracking down on protestors.”

Miloš Jakeš would remain in the position of general secretary until November 24, 1989, a week after the crackdown on demonstrators at Prague’s Národní třída initiated what became the Velvet Revolution and marked the end of Communism in Czechoslovakia.

Asked later in life by Czech Television how he viewed those seminal events, Jakeš said he was convinced the Velvet Revolution was in fact a “coup” organised by some leading party functionaries along with the State Security service and the People’s Militia. Milouš Jakeš, photo: Štěpánka Budková “We explicitly said that there must not be any attack by the police on the students gathering there [on Národní třída] because they would compare us to Nazis.

“Unfortunately, our order was ignored. Why was it ignored? It was ignored because some high functionaries within the Communist Party counted on using November 17 to remove the leadership of the party.”

Jakeš was ousted from the party in December 1989, but remained a devout communist until his death, regularly attending the May Day celebrations organised by the Communist Party of Bohemia and Moravia – the Czech successor of the regime party.

He was twice investigated by the police after the revolution: First in the 1990s, when he faced charges of treason for collaborating with the Soviets in 1968, and later in 2019, when Jakeš and other former Communist leaders were charged with allowing the shooting of people fleeing across the border into the West.

Milouš Jakeš had his funeral at Prague's Motol Crematorium on Tuesday.