In an address to the Czech Senate on Wednesday, U.S. Secretary of State Mike Pompeo warned of efforts by Russia – but especially China – to undermine democracy. Speaking ahead of travelling to several other European countries where the Chinese firm Huawei hopes to build 5G cellular networks, highlighted specific “campaigns of coercion and control” Beijing has used to advance its interests in this country. 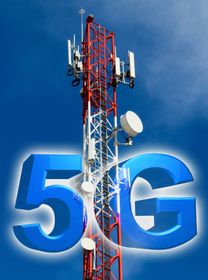 Illustrative photo: ADMC, Pixabay / CC0 In an address to the Czech Senate on Wednesday, U.S. Secretary of State Mike Pompeo warned of efforts by Russia – but especially China – to undermine democracy. Speaking ahead of travelling to several other European countries where the Chinese firm Huawei hopes to build 5G cellular networks, highlighted specific “campaigns of coercion and control” Beijing has used to advance its interests in this country.

“I happen to believe with all my heart – and America’s friends in the Czech Republic realize this now, too – the Czech experience is a harbinger of what other nations on the continent face. Russia continues to seek to undermine your democracy, your security through disinformation campaigns and through cyberattacks. It’s even trying to rewrite your history. We’ve all seen that.

“Today an even greater threat is the threat posed by the Chinese Communist Party and its campaigns of coercion and control. In your country alone, we see influence campaigns against your politicians and your security forces; we see the theft of industrial data that you have created through your innovation and creativity; we see the use of economic levers to stifle freedom itself. It is not tanks and guns. It’s very different from that…” 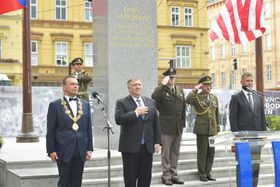 Mike Pompeo in Pilsen, photo: ČTK / Miroslav Chaloupka U.S. Secretary of State Mike Pompeo was speaking on the second day of a visit to the Czech Republic that began with commemorating the liberation of Pilsen by American soldiers at the close of World War II. In his Senate address, he recalled a number of cases where Beijing had retaliated against the Czech Republic, for example, over seeking to deepen ties with Taiwan.

Secretary Pompeo also warned of the threat Chinese investment can pose to free societies, not least when it comes to cyber security. The four countries he is touring this week – the Czech Republic, Slovenia, Austria and Poland – have yet to announce a definitive decision as to whether Huawei will be allowed to launch fifth-generation (5G) networks.

He praised the efforts of specific groups that have fought to create transparency around Chinese Communist Party actions, “often in the face of legal threats”, such as Sinopsis, a website that tracks China-related topics in the Czech Republic

Martin Hála, photo: Jana Přinosilová, Czech Radio In an interview for Radio Prague International, Sinopsis founder and director Dr Martin Hála talks about how Secretary Pompeo’s speech was received, what struck him most about its content, and in particular about Czech security concerns regarding Huawei and Chinese business interest.

“The speech was quite eloquent and very well received. I was there in the audience, comprised of Senators, some members of the diplomatic corps and Czech politicians. They seemed quite impressed with the speech – there was a standing ovation.”

“It mentioned a lot of things specific to the Czech Republic and showed Secretary Pompeo had been very well briefed.”

Was there anything in particular that stood out? He called, for example, China a greater threat to democracy and collective security in Europe and beyond than was the Soviet Union.

“All of these topics, these themes he has elaborated in speech before coming to the Czech Republic, so for people following the US-China relationship, I don’t think there was anything of surprise in the speech.

“To me, personally, most striking was the detail to which they seem to have been following the situation in the Czech Republic because there was a lot of country-specific detail.”

Was there anything in particular that stood out? He called, for example, China a greater threat to democracy and collective security in Europe and beyond than was the Soviet Union.

“All of these topics, these themes he has elaborated in speech before coming to the Czech Republic, so for people following the US-China relationship, I don’t think there was anything of surprise in the speech.

So, for example, Beijing cancelling the tour of the Prague philharmonic orchestra in reaction to the Lord Mayor’s outreach to Taiwan and striking the One China clause from the sister-city agreement?

“Yes. And also, he mentioned specifically revelations that have been brought in the Czech press regarding Chinese activities in the Czech Republic. That’s not the kind of detail you normally hear from visiting dignitaries from other countries.”

And what is the consensus, or your opinion as to the threat posed by cooperation with Huawei and Chinese companies that have these apps like TikTok, as characterised by the Trump Administration.

“In the Czech Republic, there’s been an ongoing discussion about Huawei for some time now. There was a warning by the National Cyber and Information Security Authority (NÚKIB) already back in late 2018 about Huawei posing a possible security risk. It immediately created a huge domestic uproar – there was a rather intense domestic debate involving some of the highest constitutional figures in the Czech Republic.

“And the debate has been going on ever since… I think the Czech debate about Huawei to some extent proceeds the American one. So, it’s very much a domestic issue. The fact that it’s of concern to the United States doesn’t necessarily mean that this would be something pushed by the U.S. on a country like the Czech Republic.”

Secretary Pompeo spoke quite a bit about ‘campaigns of coercion’ and disinformation. Is it fair to say, though, that the United States is using coercion as well in this regard? Is the Czech Republic, in your view ,caught between these two superpowers?

“Well, the Czech Republic made a political choice in 1989. We aligned ourselves with the West and there was a consensus that certainly held until very recently and certainly throughout the 1990s. So, I don’t think you can compare the United States with the People’s Republic of China.

“I think that would be a false equivalency. These are two very different countries with two very different approaches to foreign affairs – and of course the most important difference is that the U.S. is a democracy, whereas the P.R.C. still is in part a dictatorship of the Leninist type – the kind that we experienced ourselves here in this country and rejected a generation ago.

“So, it’s not like we would be choosing between them. We chose the democratic, pro-Western orientation a long time ago. And I think in one of his speeches here this week Secretary Pompeo said this should not be viewed as a completion between the U.S. and China, and I share that opinion.

“Sometimes it’s characterised as a ‘big power’ rivalry or competition, which is a phrase that has even found its way into some normative U.S. documents. But I think the European framing of this huge geopolitical debate right now as a ‘systemic’ competition is much more appropriate.

“It’s basically a competition between an open society, an open system, a democratic system and a closed one such as we see in the People’s Republic of China now.”

U.S.-China relations have deteriorated sharply this year. Pompeo’s remarks in Prague came a few weeks after China’s ambassador to London accused Washington of instigating conflict with Beijing before the U.S. presidential election.

The Chinese Embassy in Prague said following his remarks before and during his meetings with Czech leaders that he had made unsubstantiated attacks, tarnishing the country’s name and stoking disagreement. “[Pompeo’s] words and acts are full of ideological preconceptions and Cold War thinking, which do not belong in today’s times,” an embassy spokesman told the Czech News Agency.