Last week we told you about the opening of the Prague Quadrennial, an unparalleled showcase of world scenography – design for artistic performance – that began in 1967 and only comes around every four years. The exhibits cover everything from costumes, sound design, and theatre architecture to multi-media theatrical and performance art… in short, if you imagine a wildish menagerie of all things theatre, then you’re half way there. For today’s Arts I spent an afternoon walking around one of the most special attractions at the Quadrennial, which is the pavilion of installations from 60 different countries and regions, all entirely unique and hosting some of the best and most imaginative of scenographic work the world over. 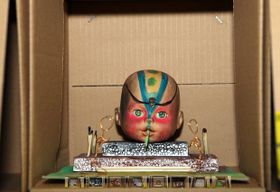 'Cabinet of Curiosities', photo: Luděk Neužil “This is the Philippine national pavilion, and it illustrates our typical bamboo house, which is found in many of the rural areas of the country. Inside, our curator has but a number of maquettes from various productions that he was a set designer for, some of which are in real theatre venues and some of which are in outdoor, street theatre performances. We also have costumes on display as well as other paraphernalia from street theatre performances, like giant masks, and other décor, like the Barbie doll which has different costumes from Islamic performances in the southern part of the Philippines…”

I think I’m in the English exhibit now, and we’re watching some videos – interviews with artists. But instead of sitting and watching it on television, the televisions are hung from the ceiling and we’re watching the reflection of the video in the water that is on the floor here… it’s very interesting. Actually I didn’t notice the water until I was standing in it…

“I am Martina Svobodová and I am the curator of this part of the PQ, called “PQ for Children”. It’s a programme for children from small ones to 99-years-old, because many adults feel like children also. We are preparing a game that guides the children through the exhibitions, and the other thing we have here is a Cabinet of Curiosities: the children make small objects and they put them inside the cabinet, so the installation continues to grow. Another important thing is that each child can vote for the one country’ whose exhibit they like the most, and tomorrow we will give the awards to the three countries with the most votes from the children…” 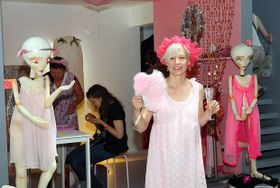 Czech exhibit, photo: Luděk Neužil “This is the Czech exhibit, which is based on the “theatre of experience”, which means you can see, touch, eat, whatever. Soon two guys will come who will be cooking – I don’t know what’s on today’s menu. You can get a haircut here, you can have a dress made here, you can search for things through the bits of torn up papers there, you can meditate upstairs, and in a few minutes we will start this “relicarium”, where you can touch the objects of old people, famous people and meditate with them. So, it’s not like an exhibit that you would just walk around and watch passively - it’s more active, you can use all the senses you have. Each booth is done by a group of two or three artists working together. Do you want a haircut?...”

You’re from Iceland? What are you doing? You’ve been walking around wearing this, slightly scary white wedding dress…

“I shouldn’t be walking around, I’m supposed to be sitting in my white house, but the electricity went off, so there’s total darkness and I thought it would be a bit creepy to sit there alone and scaring the kids. So I’m trying to fix it – I should be sitting silently and knitting.”

So what is the point of the Icelandic installation? 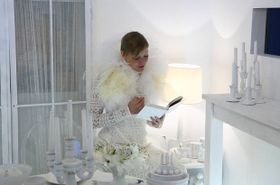 Icelandic installation, photo: Luděk Neužil “It is worked around poems by a great Icelandic poet, of which there are 21, and in my poem I’m the woman who is waiting – because the poem is about love and waiting, so I’m actually waiting for the poet to arrive. It’s actually kind of beautiful, you should see it. But when the lights are on.”

So you’re waiting for 10 days?

“Yes, for ten days, for ten hours every day. Every day represents ten years and every hour a year. It’s a little bit like meditating. I read – everything is white, we have white books and I read them – and I knit, and then I drink water and milk, anything white or clear, so I have stuff to do and I do it really slowly, so maybe for two hours I’m just drinking a cup of something…”

“This is the Portuguese pavilion. We have an inner cube that you can go in to, and there’s this compost on the ground that remains after making wine, because our company is from a wine region. And if you go up to the balcony you can watch our actors, who are doing short theatre scenes in the bar below several metres away, and you can listen to them on the headphones. They are doing short scenes from the book “Blindness” by Nobel laureate José Saramago; they do sixd modules of five minutes each in a loop eight hours a day. It’s an open presentation, so they have to bring all the things around them into the performance, because everyone else, without knowing, become part of the set, an extra…”

We’re in the basement of the National Gallery now; what’s going on here? This is the Norwegian exhibit? 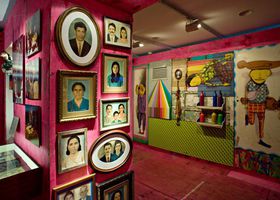 Brasilian installation, photo: Martina Novozámská “Yeah. This is a theatre machine. It is a 40 minute looping sequence with a lot of garbage – it’s made mostly of organic debris. The figures are between half a metre and a metre tall and they move back and forth, they all have sounds, and there is also video, everything is automated, and it just goes on and on and nobody can manage to leave the room because it’s so haunting. It’s like a trip machine I would say.”

And is there another meaning to it than that, or is it just intended to hypnotise the audience?

“There’s not like one meaning attached, there are lots of meanings. The way we make these things is we like to keep them open in the sense that it’s easy for people to put meaning into it – there’s not, like, one fixed meaning, it’s a well of possible meanings…”

You still have Saturday and Sunday to see, or rather experience, the exhibits in the National Gallery and elsewhere around Prague. For the rest of the festival programme check out the website at pq.cz. 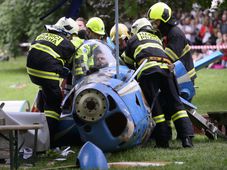 The Prague Quadrennial, the largest exhibition of performance design and theatre architecture in the world, gets under way in Prague… 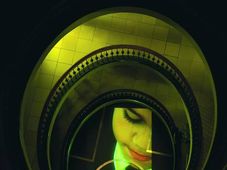 It’s always a long time coming, but the Prague Quadrennial is here again. The world’s largest “performance design” event will be taking… 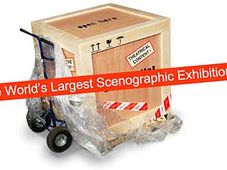 On Thursday, the Prague Quadrennial International Competitive Exhibition of Scenography and Theatre Architecture opened its doors…