Dudy is the Czech word for the bagpipes and Call of Dudy is the title of a documentary film focused on the Bohemian piping tradition. Featuring lots of great music and interesting interviews, it takes viewers to the instrument’s traditional strongholds in south and west Bohemia, and over the border into Bavaria.

Call of Dudy was produced and co-directed by long-time Prague resident Jefe Brown:

“I had shot a couple of feature films and I was tired of actors and all their prima donna behaviour. I was wanting to get back into documentary films as a producer and filmmaker. I had been to the Strakonice bagpipe festival in 2000 and 2002…I had been there twice, it happens every two years. 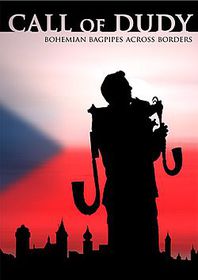 “Also I was taking a greater interest in music documentaries. No one had shot it. Originally it was just an idea to go down to the festival, which is just a quirky, fun, very offbeat…situation.

“Why in the Czech Republic is there a bagpipe festival? But there’s a huge tradition there, and the more we got into and more than our original idea to just drink beer and race around with cameras and have a good time – which is in essence still what we did – the more we realised that there was a rich story there which hadn’t been told in an hour-long documentary film.

“So the more we got into it, the more we decided that more than just showcasing the festival needed to be done.”

The Strakonice International Bagpipe Festival has been running in the south Bohemian town for over four decades. Another stronghold of the piping tradition is Domažlice, the capital of the west Bohemian region of Chodsko. One thing that emerges in Call of Dudy is a certain rivalry. An example: in Chodsko pipes using metal screws are played, but the strict traditionalist Josef Režný – founder of the Strakonice festival – tells the film’s makers he wouldn’t countenance such inauthentic pipes. Jefe Brown says the different camps are not always so rigid:

“People use both [types of dudy] and I think it doesn’t matter if you’re western or southern Bohemia – that’s the sense I always had from it. There’s great crossover, and these bands perform together all the time at festivals. 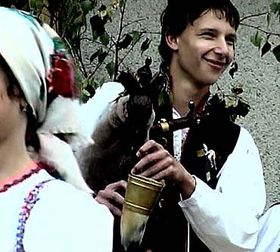 “The three regions we tried to concentrate on were Prácheňsko, which is the south – Strakonice, Chodsko where Domažlice is, and Chebsko where Cheb is. Somehow Chebsko appeared less – it’s more part of the border story.”

American music scholar Mike Cwach, whose father’s ancestors were Czech, features in the film Call of Dudy. He lives in the US but frequently comes to the Czech Republic. On the line from Domažlice, he describes his first encounter with the dudy.

“That was on my first trip to the Czech Republic in 1998. At the time I had just started playing Scottish bagpipes in America, so I had a little bit more awareness of bagpipes in general. 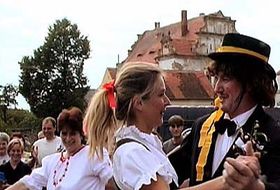 'Call of Dudy' “I took this particular trip to the Czech Republic, I had started getting interested in my heritage a little bit. I went to an evening of Czech bagpipes, and I really hadn’t known what they were.

“It piqued my interest when I saw the Czech bagpipes played for the first time in a village called Klenčí, here near Domažlice. 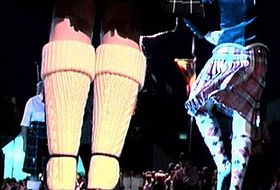 'Call of Dudy' “I thought to myself the best thing for me would be to bring this instrument to America. At that time I didn’t know that the Bohemians who first came to America in the 19th century…among them in certain regions – in states like Nebraska and Wisconsin and Minnesota – were bagpipers from Bohemia.”

Call of Dudy’s subtitle is Bohemian Bagpipes Across Borders, and the film documents the overlap in the musical cultures of west Bohemia – from where many ethnic Germans were expelled after the war – and the German state of Bavaria. Producer Jefe Brown: 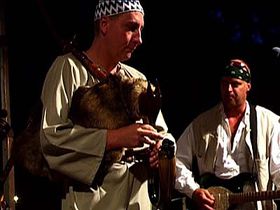 'Call of Dudy' “The songs and the traditions of the songs are quite similar, oftentimes the same – just sung in different languages. The more we got into the dramaturgy of the film…and our dramaturg Keith Jones realised, and we were all living this together, that these stories crossed over. This was a part of the story.

“It’s a very touchy issue, the whole Sudeten German issue. What we very much tried to focus on was the stories and the music, and not the negativity of the situation. That came out on its own, even though we wanted to concentrate on the music, that’s all the musicians really talked about. 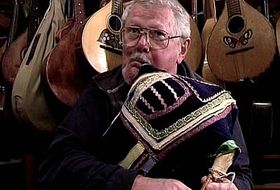 'Call of Dudy' “And that’s actually quite nice. Because usually you mention the Sudeten German or the border issue and people will become very negative and you’ll see a lot of tasteless comments. So we were happy that that didn’t really come up in our interviews or our shooting.”

Finally how healthy is the Bohemian bagpipe tradition today? Does it have a future? Mike Cwach: 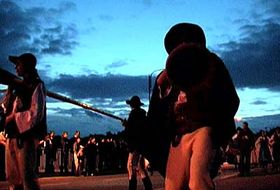 'Call of Dudy' “They definitely have a future…It’s important what they do in some places like Domažlice, Strakonice, Blatná, places like this where they still teach bagpipes in the elementary art schools.

“There are many young bagpipers in Strakonice, for instance, young gals – mostly there young girls are playing the bagpipes. Historically women did not play the bagpipes in Bohemia.

“Here in Domažlice they teach bagpipes…I think there’s a good future for it.”

For more about the documentary go to www.callofdudy.net 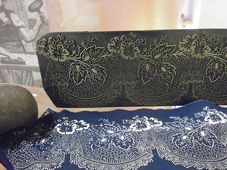 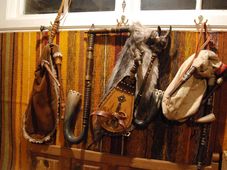 In the run-up to the 23rd International Bagpipe Festival in Strakonice, a special bagpipe exhibition has opened up to the public. Seventy… 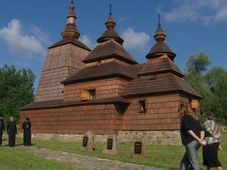 News from the regions

In this week’s Panorama: a dispute over a Carpathian wooden church ends in a surprising manner, home-made folk music instruments and…