Changing the face of the city: Popular Signal Festival returns

Prague’s Signal light festival has become massively popular and was rated one of the best festivals of its kind by the Guardian last year, when it attracted almost half-a-million visitors. The third edition was launched in the Czech capital on Thursday. 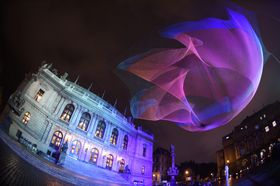 1.26 by Janet Echelman, photo: CTK A few hours before I spoke to one of the co-founders Martin Pošta, who says organisers were ready for an even greater influx this time.

“In terms of organization we have had to prepare for even more people. Depending on the weather, we expect that the number of visitors could surpass even last year. Certainly, knowledge and appreciation of the festival has spread and we have more and more people coming from other parts of the Czech Republic and from abroad. For ease and a better user-friendly experience, this year we have recommended visitors follow a one-directional route.”

At the very least, they can find that information online…

“Yes, it’s very simple, installations are numbered form 1 to 21 and it is easy to follow.”

Over the last few days leading up to the festival passers-by were able to see a giant white sphere going up at Klárov – I understand it is one of the main attractions… what is it?

"It is simply amazing because you get to see people wandering the streets of Prague with their maps...enjoying the installments and the architecture."

“Basically it is a mobile planetarium which will feature a 360 degree projection. It is the result of a year ongoing project, an international co-production among four festivals. The aim was to bring this installation to life. It is basically an inflatable ‘planetarium’ and the art piece to be presented is by French artist Joanie Lemercier – one of the founding members of the audiovisual label Antivj, one of the pioneers in Europe of videomapping.”

“That is called 1.26 and there is an interesting story behind it: as an artist she travelled around the world to and was inspired by fishnets she was hanging by the sea. The other story that goes with it is that refers to the Chile earthquake [ed. note: which may have resulted in a 1.26 microsecond shortening of days on Earth, according to a NASA report].” 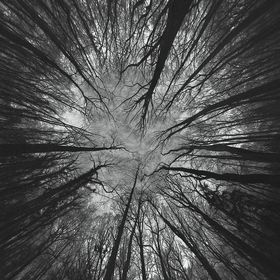 Nimbes by Joanie Lemercier, photo: archive of Signal Festival It’s always very exciting to see a mix of more traditional media with newer forms: another installation is a massive sculpture entitled Ocelot by the Czech sculptor Čestmír Suška (described on the website as a ‘matador’ of the Czech sculpture scene combined with a light-based artwork from Petr Pufler…

“That’s exactly right. It is a combination of a sculptor with a long track record and an up and coming younger artists who created a special light installation and it should be very exciting, this mix of generations and joint-venture.”

We know about the enormous number of people last year who saw the show: for someone coming for the first time, how would you describe the experience. Because there must be just so much input from all sides?

“From my experience, it is simply amazing because you get to see cross-generations of people wandering the streets of Prague with their maps. It is like an orientation run and you have to navigate around. It is an exceptional experience and we hope we are getting people to enjoy the city again, to get off their couch and away from the TV and appreciate the architecture and the instalments.” 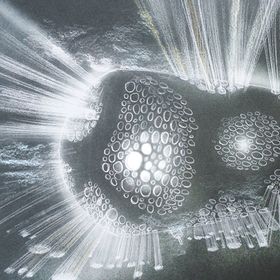 Ocelot by Čestmír Suška &amp; Petr Pufler, photo: archive of Signal Festival That is one aspect that we haven’t mentioned yet is the architecture: it makes you see familiar sights, even monumental sites which become normal when you pass them day after day and to see them in a new way, to rediscover them so to speak. In a way, it reminds me of Christo, when he and his wife (who didn’t work with light of course) but covered whole bridges in fabric or canvas, creating a sort of negative or outline, so that you would see the objects for what they were… I guess you could argue that light has kind of replaced that.

“At Signal, definitely. Christo’s work was very new and one thing which I like is that it was low-tech, more analogue. Signal is both and it definitely changes the face of the city for four days.”

The Signal Festival began on Thursday, October 15 and runs through Sunday. 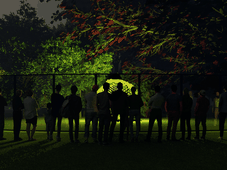 The seventh Signal festival will again bring video mapping and light installations to the streets of Prague, every night from Thursday… 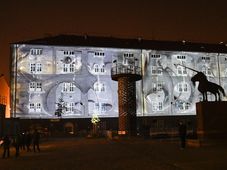 The Signal Festival, now in its 6th year, kicks off in Prague on Thursday night. The three day light festival offers visitors over… 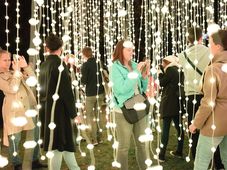 This year’s Signal festival of light has just got underway in Prague. Check out this video of some of the best installations and shows…