Many of those who grew up in the late 1970s and 1980s in the West well remember the golden age of arcade video games: 8-bit and later 16-bit graphics and excellent sound that was the apex of electronic gaming and game design then. Since 2011, anyone in the Czech Republic wishing to experience what it was like can do so easily - at the the Arcade Museum in Červený Újezd just outside of Prague. 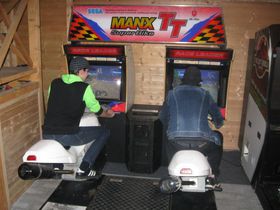 Photo: Jarda Petřík Founded by collector Jan Orna, the museum boasts more than 120 titles including first-generation classics like Space Invaders Ms. Pac-Man or Centipede as well as later titles, like Rampage or Gauntlet. If Elf shot the food! means anything to you, you’ve come to the right place.

Jan Orna was ten or so when he saw his first arcade game in 1980s Czechoslovakia. There were no arcades in the country under Communism, but there were travelling funfairs. Some had caravans adapted with original machines which were bought second-hand and brought in from West Germany. When he saw some of those for the first time, says Orna, he was hooked.

“I loved the flashing lights and the sound. These were full-colour games when most people in Czechoslovakia still had black & white TVs. Arcade games then were also far better than anything you could play on a computer and not many had those, either. So I told myself I would own one of those machines one day.”

According to Orna, officials turned a blind eye to arcade games, not seeing them as a threat. Funfairs in general were part of a grey economy and Orna says it is likely bribes were paid for customs to look the other way when arcade games to be brought over the border. The museum founder again:

“In Central Europe, there is nobody else who has such a complete functioning arcade.”

“I never heard that the police would raid a funfair because of arcade games. Someone may have gotten the idea somewhere to let it slide – in Czech there’s the saying ‘Kdo si hraje, nezlobi’ – suggesting that those who play games, don’t have to time to misbehave. It probably suited the regime. Enough bread and games keeps people from starting revolutions, so to speak.”

Keeping the games running was often no easy task: when arcade machines broke down, they had to be fixed locally, without proper spare parts. A small community gradually formed of those took the game cabinets apart, investigated their electronic innards / learning how the boards and connections worked. If they could, they fixed the problem and were able to reconnect the machines.

“Gradually there were guys who learned more and more about the hardware. They dug around inside and learned how to keep the machines running. By trial-and-error, they learned how characters in the game took certain actions or events were triggered. 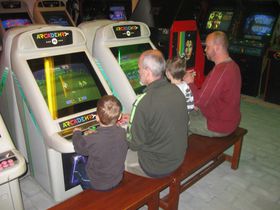 Photo: Jarda Petřík “It was impossible to get original parts, of course, so they had to improvise. And some came up with very novel solutions. Some, in the end, knew more about those cabinets than licensed technicians abroad. It was thanks to some very skilled people, that some of our generation were able to play some of those original titles.”

After the fall of communism in Czechoslovakia, Orna first collected old computer games and game consoles and computer systems. Then he began to buy large arcade games of yesteryear, too.

“I never set out to found this business or museum. But it was a key step. I had accumulated some 40 or 50 of arcade games and they were stored everywhere. In the garage and in the study, my friend’s place, his garage, and at my wife’s parents. The cars were parked on the street while inside it was impossible to move; it became a question of what to do next.

“For a while I considered selling off most of the collection and keeping the 10 rarest games but then we got the opportunity to use property in Červený Újezd which became the museum. Since then, anyone who wants to can come and play and the business has done well.”

“I had accumulated some 40 or 50 of arcade games and they were stored everywhere. In the garage, in the study, my friend’s place.”

To a large degree, investing in arcade games, which would otherwise have been destroyed, proved to be a decent investment: in the past some games could be bought dirt cheap; but as an arcade game’s rareness increased it drove up asking prices. As niche hobbies and pop or geek culture became increasingly main stream an interest in old-school arcade games has gone up. Over the years, the market has seen considerable changes.

“When I got interested in acquiring arcade games 12 or 13 years ago, you could still buy a machine from neighbouring Germany for the equivalent of 10,000 crowns. But things have changed. You couldn’t even get the main circuit board for that now. Everything is a lot more expensive and in Europe most sources have dried up, you have to buy from America. So demand has gone up. 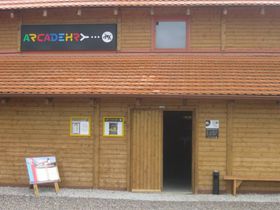 Photo: Jarda Petřík “At the same time, there were lots of cases where we got a call and someone was selling an old game which no longer worked where the repair was trivial. Sometimes they were totally unaware what they were selling.”

Sometimes Orna was able to snag real gems. Some games only went up in price later, titles which had been previously overlooked, either because of related events like a film release or even a tragic demise.

“There was one game we have called Michael Jackson Moonwalker which nobody really ever paid much attention to before. But when Michael Jackson died unexpectedly, the price shot up and has stayed high ever since – between 70,000 and 90,000 crowns.

“We were pretty lucky. Over the years that we have been doing this, we have put together an excellent collection.”

“We were pretty lucky. Over the years that we have been doing this, we have put together got quite a complete collection from the arcade golden age. In Central Europe, there is nobody else who has a such a complete and functional arcade including the great first wave games and we are missing only a few titles. The most played games in our museum, however, are 1990s games like Street Fighter. These are games from the Amiga generation. But they like to play the first generation too, Asteroids, Battlezone, even Space Invaders which are still in B&W.”

One of the best things about the Arcade Museum? No need for coins or tokens and no anxiety of running out. Visitors pay by the hour and can play as many different games as they like. 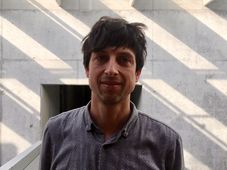 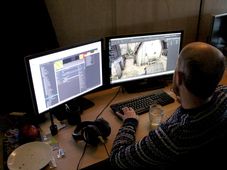 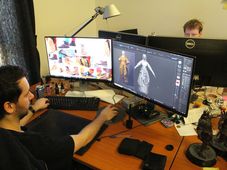