Karlovy Vary: the best of the fest

Karlovy Vary is best-known for its health-giving waters. I’m right now inside the Sprudl Colonnade, or Vridelni kolonada, where people are filling up their special spa water mugs with all types of the hot, sulphurous stuff. But, for eight days a year, the attention shifts elsewhere, and a different crowd comes to Karlovy Vary for the biggest film festival in Central and Eastern Europe. This year, the festival has been bigger, busier and better than ever, here are just a few of the highlights… 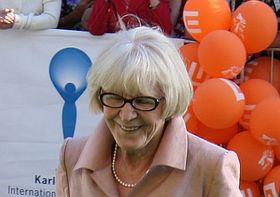 Eva Zaoralová, photo: Štěpánka Budková Eva Zaoralová has been organizing the festival for the past 15 years. The last seven days have seen her run off her feet, but in one of her breaks I snuck into her office and asked her if she was happy with the way that this year’s festival was going:

“Yes, up until now I am very happy. There are not many problems, there are some, but we can resolve them.”

Everyone is saying that this year the festival is bigger than ever, does this not mean more work than ever for you?

Autograph hunters surround the cast and crew of one of the 235 films screening at the festival. 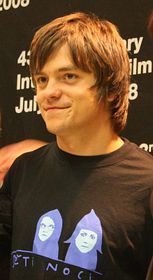 Jiří Mádl, photo: Štěpánka Budková Their target is Jiří Mádl - one of the busiest actors at Karlovy Vary this year. The young Czech heartthrob stars in two films to have premiered at the festival. The first, ‘Bathory’, is the most expensive film ever to be made in Central Europe, while the second, ‘Night Owls’, represents the Czech Republic in this year’s competition:

“The first one is like a big historical movie, which is co-produced by four countries. I don’t have such a big role in that. It’s not a leading role, but for me, it was my first experience with English-spoken film, so that was great. And the second one, ‘Night Owls’, it is a deep film about a girl’s soul, so there is a big difference between the two.”

And how are you enjoying Karlovy Vary, because you are quite busy? 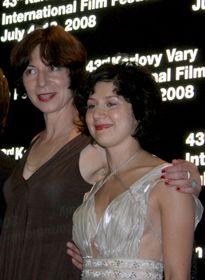 The director of ‘Night Owls’, Michaela Pavlátová, is one of two Czech filmmakers to find their movie in this year’s competition. She says that the number of Czech films to make the official selection is reflective of the state of Czech cinema right now:

“I think it is a great time. I must say I am really surprised that there are so many Czech films suddenly. There were in spring, and it will be the same again in fall. Every week there is a new Czech film premiered, and that is quite surprising. About the quality – sometimes there are better films, but then there are some films which you can feel from the beginning that there was some commercial purpose. You feel that the film hasn’t been thought about and that this is a product which is being produced. But I think that that is normal, and that on the film market, in the cinemas, there should be all kinds of films.” 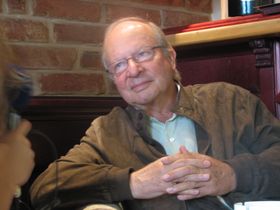 Ivan Passer, photo: Vilém Faltýnek Ms Pavlátová’s film will be judged alongside 13 others in this year’s main festival competition. The man doing the judging, with a little help from the panel, is Ivan Passer. One of the most important names in Czech film is back exactly 40 years after leaving for the States to head this year’s festival jury:

“Oh it’s lots of fun, because I am meeting my old friends, my schoolmates, and also people from other countries whom I admire as filmmakers. People like Rita Tushingham who is here now, and Brenda [Blethyn] who is a member of the jury. But you know that since the revolution in 1989, I have made a point of coming back here once or twice a year anyway.” 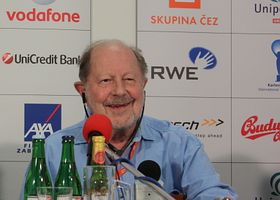 Nicolas Roeg, photo: Štěpánka Budková Alongside the competitions taking place at Karlovy Vary, there are also several retrospectives and tributes to certain directors. Documentary maker Les Blank has been in town to present his back catalogue, as has British director Nicolas Roeg. Over the media clamour at a press conference on Monday, he said he was thrilled to be in Karlovy Vary this year:

“Well, it is a great festival, there is no doubt about that. And it is a great set, because it is a brilliant, brilliant, startlingly beautiful place that they have it in. It is rather like a movie, I mean it is almost unbelievable – the setting is so perfect for movies.” 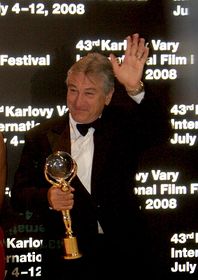 Robert de Niro, photo: Štěpánka Budková But the big guest at Karlovy Vary this year has most certainly been Robert De Niro. He received a Crystal Globe on Friday night for his contribution to world cinema, accepting the award in impressive Czech.

Throughout the week, hundreds of thousands of film-lovers have been flocking to Karlovy Vary to get up close to the stars and catch a film or two that they might not otherwise. What have they made of the movies they’ve seen?

“So, I can say which film I liked the most, which was ‘The Man who loved Yngve’ – a Norwegian film. Otherwise, one more film I liked was ‘Lat den ratte komma in’ – ‘Let the Right One in’. And no other film especially amazed me.” 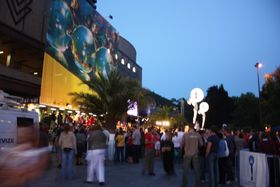 Photo: Štěpánka Budková “I want to talk about the movie we saw yesterday –‘Pusinky’ – a new Czech road movie. I didn’t expect anything from this movie, but I loved it. The start of the film was poor, but it wasn’t just another teenage movie, which I expected it to be. I’m glad that I saw it.”

“I liked Dr. Aleman and the Croatian film ‘Iza stakla’ – I remember these, and the Italian film ‘The Girl from the Lake’ too.”

Who do you think is going to win the competition this year? Do you have an idea?

“I haven’t seen all of the films in the competition, so I wouldn’t like to guess, but I think the German film [Dr Aleman] could be one of the favourites.” 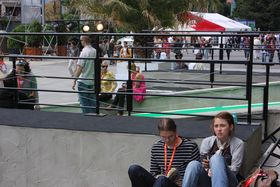 Photo: Štěpánka Budková And is this your first festival?

What do you think of it?

“I like it, good water, good films, good people.”

The whole festival wraps up on Saturday with the announcement of the competition winner. After eight days of film, concerts, exhibitions and parties, that will be it for another year. The festival winners may not yet be known, but it is already clear that, this year, Karlovy Vary International Film Festival has been bigger, and busier, and as popular as ever.