The Letní Letná festival of New Circus is back and well underway in the Czech capital. One of the headlining acts this year is LIMBO, a production which has gotten rave reviews, was reportedly seen by Madonna (twice) and, not surprisingly, has sold out. I was lucky to meet up in the Spiegeltent with troupe member Mikael Bres who told me all about the show, described as Heaven can wait – this is one hell of a party. 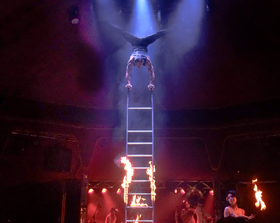 LIMBO, photo: archive of the festival “Hello, I am Mikael Bres, one of the performers in the show. I do a Chinese pole act, where the pole is about six metres long, so I do a lot of jumping around, flying around and falling, not on the floor of course. I catch myself just before the fall. I also do some of the music, some Beat Box, some guitar and some clowning around.”

“That’s right and that was a moment which we came up with right when the show was being put together and first performed. I was doing my act and I found a feather which was stuck at the top of the tent and I decided to drop it. The effect was immediate and people liked it and the director said ‘keep the feather’, so I did.”

For people who haven’t seen Limbo yet, you let it go…

“I am really at the top and I drop the feather down. And I wait until the feather is about halfway and then a slide down the pole super-fast. Sometimes, though the rush of air as I come down causes the feather to flutter or swoosh away but even then I catch it.”

"There is a lot of action and the audience is very close to everything and it takes place all around."

This production has been on for some time, it premiered at one of The Fringe festivals – I guess it would be almost an understatement to describe it as physical – it’s intense!

“Yeah, yeah. The premiere was in Adelaide and it is intense. There is a lot of action and the audience is very close to everything and it takes place all around. There is a mix of emotions as they watch – there are some sad moments in the show – and you can see the emotion in their eyes. It’s very special and this is a show where we all do something, with some incredible talent in the cast. So it’s really something but also tiring as well.” (laughs)

And the music is live as well.

“The music is live and we three magnificent musicians, too from Australia and one from Berlin and certainly there is something very particular about the music because one of the instruments is called the kalimba, the little African percussion with a lot of steel sound, and he has like 15 of them and plays them all and creates a panel of sound that is incredible. The music was written by Sxip Shirey and so it contains a lot of Hip Hop, funk, jazz, vibe, Trip Hop, a really nice combination of sound. I also wrote a song for the show, during a funny striptease on the stage. It’s in French and has nice images and is a nice story.” 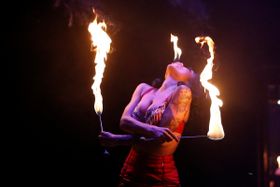 LIMBO, photo: Tony Virgo / archive of the festival The show has been called very sexy or an adults-only cabaret… so how sexy is it?

If we discuss the name Limbo and the tagline ‘The greatest party between Heaven and Hell’ – is this work about purgatory, are the actors somewhere in between?

“Yes, it is the state between Heaven and Hell when you put the feather on the scales and if it is too heavy you go to hell and if it is light enough, you go to Heaven. During the show, you can make your own story, follow who you want among the characters, and it may be that you choose who to prefer. And it is dark. And intimate. There is a feeling the show creates: if I was an audience member I think the experience is to be amazed. And it ends well and like a big party.”

"Yes, it is about the state between Heaven and Hell when you put the feather on the scales and if it is too heavy you go to Hell..."

It is set in or was inspired by the 1920s but to what degree? Is it in the set, the costumes, the overall feeling of a bit of cabaret and burlesque?

“Yes. In this type of tent, the Speigeltent or Magic Mirror I also cannot imagine any other kind of show. It comes from the music, swing, jazz mixed with contemporary music, I love the costumes, shirt, vest, a nice jacket and the interior is a mix of velvet and wood and mirrors. They all support the mood of the 1920s. I think the style fits really well and love the mix.”

Limbo is one of the big acts at this year’s Letní Letná – all of the performances have sold out… have you kept track of how many times you have performed in this production?

That’s amazing to me… How have you found this festival and Prague so far? 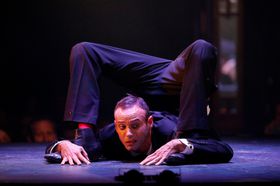 LIMBO, photo: Tony Virgo / archive of the festival “There is a lot of great atmosphere here in the park, with all the chapiteaux. The mood is very cool and there is lots to see. People who come to see the show can catch up with us after, to give us feedback even if they are critical or just want to talk. Don’t be shy. Sometimes people are like ‘I wanted to talk but I was too impressed’. Don’t be impressed, I am human, I am just doing stuff on stage but people are welcome to come and have a drink and talk.” 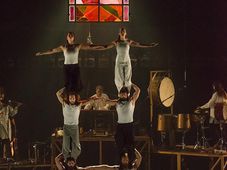 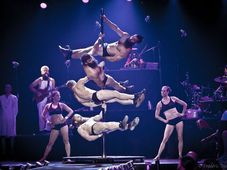 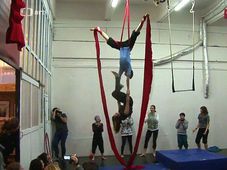