The London Czech Centre was instrumental in a recent project highlighting the industrial and cultural heritage of Ostrava in the east of the country. Entitled Stories from Ostrava – From Industry to Culture, it includes a short film called D.O.V by two students of architecture and an exhibition by photographer Viktor Kolář. Together, the present a unique glimpse for British audiences into another side of the Czech Republic. “This was a project which was a very close to my heart, together with my colleague, we knew about the Ostrava ‘story’ and wanted to show the incredible change from an industrial city to a cultural hub. We felt that this was something which would resonate strongly in the UK because particularly Britain in the past had to deal with the redevelopment of industrial sites in areas like Liverpool or Sheffield. Ostrava is a similar story so that is why we approached the head of the Architectural Association Gallery head as well as a course leader from the London School of Architecture and took them on an operational visit to Ostrava. To show them what redevelopment was going on.

“We stayed for three days, talked to a great many people, met with Marek Pokorný of Ostrava’s Plato Gallery and Marta Pilařová from Provoz Hlubina who introduced us to many others who were involved in the project from the beginning. Seeing that with their own eyes and hearing all these stories, sort of shaped the whole project and the curator decided that yes, they wanted to develop the idea with the Czech Centre and within a month to send students there on a research trip.”

For those who are not familiar with the city, what is the industrial heritage of Ostrava? Is it all steel-making or are there other heavy industries there that we still see the remnants of? 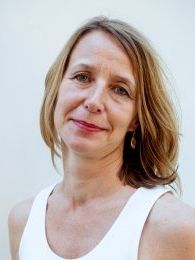 Renata Clark, photo: archive of Czech Centre London “The heritage we focussed on particularly is a specific site called Dolní oblast Vítkovice (D.O.V.). It is a decommissioned site which stopped iron production in 1993. What is unique about this place is that it was a combination of coalmining, coke production and steel production. I believe this is something which didn’t take place anywhere else in Europe or even the world – that all three parts of that story of iron would be concentrated all in one place.”

So the trip that took place afterwards with students: were they surprised and was this the basic start of what eventually became what they described as a film essay?

“Definitely. They came to Ostrava in July, which is the time when the Colours of Ostrava music festival is happening; they had, on one side, the incredible industrial buildings and on the other all of these concerts taking place: a lot of young people, great atmosphere, many people, enjoying the heritage through different means.

“The students were overwhelmed with impressions and really wanted to capture the spirit of the place, the visual aspects of those blast furnaces. So they decided to use the medium of film. They were given a brief by the Architecture Association to showcase Ostrava at the London Festival of Architecture 2016, but they had total freedom in how to put the film together.

“In the film, they wanted to capture the community spirit, which is one of the themes of the festival this year. They interviewed many of the key players, representatives of the city, people from cultural organisations and institutions, historians and architects. They shared their views and opinions in the film itself.” 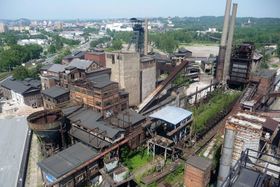 Dolní oblast Vítkovice, photo: Václav Žmolík Who are the filmmakers and was there a Czech or a Slovak connection there?

“The film was made by two students from the AA school of Architecture: Timothy O’Hare and Veronika Janovcová. She is Slovak and so was very important on the project, understanding the cultural contexts and acting at times as interpreter.”

What impressions did the film leave you with?

I think that D.O.V, which is the title of the film, is really a journey. The filmmakers take you on a journey through Dolní Vítkovice, it is as if you and the camera were on a bike and you ‘ride’ though the site with those gigantic blast furnaces looming over you. It is quite an impressive and dizzying ride which is cut with extracts from those interviews. It is a film essay, in the end, not a documentary. On the one hand, it is an artistic impression and on the other hand it brings up things which are going on behind the scenes…”

How does it all fit it within the ongoing discussion of revitalisation versus preservation when it comes to industrial heritage?

“Much of this is the topic of the interviews and the main question asked is indeed what is the role of revitalisation and will it assist the city or is it a threat. In the end, the viewer is left to make up her or his own mind.”

We haven’t had much time to talk about it, but another aspect of the show this week was an exhibition of photographs… Photo: Viktor Kolář, source: Czech Centre London “That’s right and it is a key part of the project: some 37 works by the well-known Ostrava-born photographer Viktor Kolář. For the first time, this exhibition juxtaposes famous B&W photographs from the 1960s and ‘70s with recent work in colour. The photographs care integral to the show because they take the focus from Dolní Vítkovice to Ostrava. You can see all the changes the city has been through: you can see a city of secret, unknown places where time stood still. But it is also a city of new glossy architecture`. The old decaying buildings are juxtaposed with the glass fronts of new developments. So it does tell present a very varied but continuous picture of one city.” 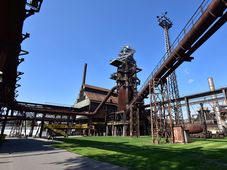 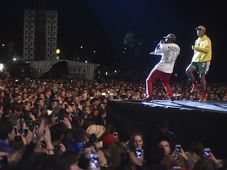 This year’s edition of the Colours of Ostrava music festival is now underway. The four-day extravaganza is bringing pop stars as well… 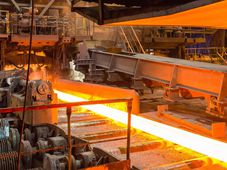