Have you ever wondered what a spider's web made out of neckties would look like? Or perhaps a dilapidated Italian house inside a Czech garage? Well, look no further: the Tina B Contemporary Art Festival has, for the past week, been presenting some rather unusual pieces of art in some extremely unusual Prague venues. Artists from as far afield as Iceland and Japan have been exhibiting works alongside homegrown talent in the capital's Laterna Magika Theatre, Italian Embassy and soon, a rather unexpected final venue. The Tina B Temporary Space is set to open this Sunday. Beforehand, curator Marek Tomin gave me a tour:

“Okay, well we’re in Prague 7 – on a street called Dukelských hrdinů, pretty much directly opposite the Czech National Gallery, and the building we are in front of is essentially an abandoned, dilapidated building, that we are turning into an exhibition space for the period of the Tina B Prague Contemporary Art Festival.”

And the façade of this building, which used to be a pharmacy of some sort, has been revamped for the purposes of this exhibition… 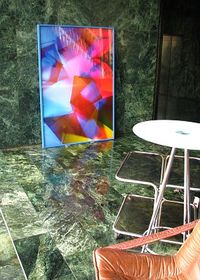 Photo: Barbora Kmentová “Well, what you see is a special intervention by a Japanese arts group called Mouhitori. And they’ve used hundreds, if not thousands, of bits of A4 paper, which they have cut up in different ways. It is special paper that they have brought over from Japan. On one side it is blue, and on the other is an image of a new material that they are using now in Japan, which is made to look like wood, but which isn’t actually wood – it’s sheet metal of some kind. And they’ve stuck these papers onto the façade, and if you look from a distance, from a few yards away, you will see that in fact it is an outline of a structure. And in fact it is the outline of a building from their home town near Hiroshima.”

This third Tina B festival spans from September 25 to mid October. As well as taking over the Italian Embassy, organisers have commandeered a number of the city's billboards – look out for nonsense collages made from newspapers, and some rather odd advertising slogans, on a signpost near you. But, according to Marek Tomin, the festival is also about bringing art from outdoors into a gallery. He shows me into the first room of his exhibition:

“For me, this first room is the interface between public space as such, and more dedicated space. Although obviously, you know, this building is not a dedicated space in the normal sense of the word – it is an abandoned building which we are inhabiting with art for a limited period of time. And that is also one of the thrusts of Tina B, looking for alternative spaces, which are not necessarily normally used for contemporary art. And this is the most stark example of that. I mean, this building has been out of use for many, many years, and what you see there is a tag by one of the younger street artists – a very young street artist – called Zipper. Not an intervention I actually asked for this one, but he tagged the wall.

“And what you see here is a classic by a classic Czech street artist called Pasta. It is essentially a kind of tag, but obviously not a tag along the lines of those squiggly doodles you see on buildings.”

And can you explain how it looks for our listeners?

Pasta was unfortunately not around to comment upon his work, but artist Hynek Vacek was. He has made an extraordinarily complicated and mechanical-looking piece, which glows technicolour in what was formerly the disused pharmacy's WC:

“I usually use projections, which I shine onto plate glass. But there are other systems of projection I use, with lights and projections onto glass objects. And that is what I do in all of my work. This one is a monoscope.”

Hynek's monoscope sees a television set’s cathode tube put to work inside a cut-glass structure on wheels. Light too is very important in the next artwork that Marek Tomin takes me to see:

“So, this entire room is a site-specific installation by Vladimír Skrepl, who is head of Painting Studio II at the Academy of Fine Arts. It is a very interesting installation. Essentially, the key element of the installation is an altar, with a figure on it – a figure of worship. It’s an unusual idol to worship. It is all the different icons that society worships at this point in time, but mixed in with all of the different aspects of the current materialistic tendencies of society. Skrepl’s work is always about beauty and ugliness, and the interfaces between the two. About love and hate, about self-hate, about hate of someone else.”

It seems like a lot of stuff in this room is not necessarily just here to provoke, but would provoke. I mean, we’ve got swastikas of sorts there, there are daubings saying bring back Lenin over there, there is a lot of quite graphic pornography too. Is this deliberately set out to shock? 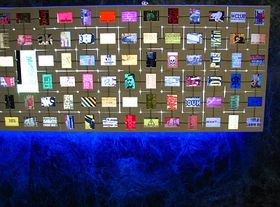 Photo: Barbora Kmentová “No, it is definitely not trying to shock deliberately, but rather presenting that which is shocking and all around us. There is nothing here in this room that you couldn’t buy at your local news stand or in your local corner shop. But, in presenting it together, Vladimír is… You know, it is about presenting it.”

And it is true that it is presented very beautifully, at first I just thought, oh, what a pretty room, but then it gradually dawned on me that there is a lot more going on…

“Yes, absolutely. You know, Skrepl’s work is all about soft and hard, and the softness of the hard. The colour tones - the pinks - that you would normally associate with something soft and cuddly has in fact here a very brutal content and impact. And it is working with these contrasts that the whole installation is about.”

The Tina B Alternative Space is perhaps one of the most fun, and most unusual, places I have gone to look at art in a while. Just beware of the tripping hazards and bare wiring when you go. After a few initial teething problems, the space is set to open on Sunday, October 5, and stay open for the next three weeks. And that spider's web of neckties is quite a sight to see! 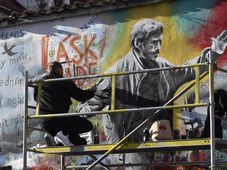 John Lennon’s wall in Prague, which features a wide array of thematic street art, is a popular destination for tourists and a symbolic… 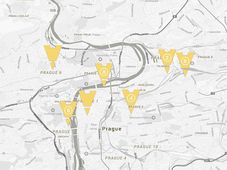 In today’s Arts Jan Velinger talks to Nicole Princlová, one of the people behind artspotting, an interactive online project highlighting Prague’s… 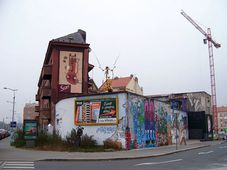 After eight years of existence, the Trafačka art gallery in Prague is closing down, making way for a new housing development. Over…