This Saturday, the National Museum in Prague will open its newest building to the public, the former Prague bourse, former building of the Federal Parliament, and until only recently, the headquarters for Radio Free Europe/Radio Liberty. Located across from the neo-Renaissance National Museum at the top of Wenceslas Square, the neighboring glass-and-steel building will house new exhibits starting this autumn. 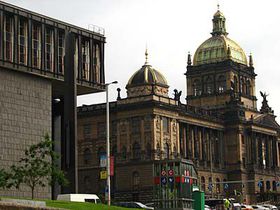 “The first exhibition will open on September 15. It was symbolically offered by Slovakia and will feature 3,000 historic gold coins from Kosice. That will be followed by the exhibition Be Free on November 17th looking back on the events of 1989. The end of the year will then see an exhibition dedicated to 100 years of the Olympics.”

This weekend, when the doors open to the public the first time, visitors will be able to learn more about the building’s long history. Michal Lukeš again: 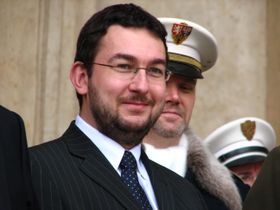 National Museum head Michal Lukeš “Basically there are three ‘levels’ so to speak that visitors will be able to explore. First, there are the parts of the building itself. Visitors will be able to see areas that once belonged to the Prague bourse. Later, in the late 1960s and early 70s the building was transformed into the parliament building, with a new section added –supported by the famous Vierendeel pillars. Second, this was a place where history was made: where one-party rule of the Communist Party was revoked after 1989. It was a place where Alexander Dubček spoke and of course many other visitors such as Mikhail Gorbachev or Queen Elizabeth II. Finally, the building still features many works of art that visitors will now be able to appreciate.”

All this is part of a plan for the new building – which must still be re-named – to fully complement the National Museum itself, a stone’s throw away. It will prove especially useful during the latter building’s reconstruction, which should wrap up in 2012. Both will be connected by an underground tunnel, built at the cost of 50 million crowns, making it even easier for visitors to see both buildings, without, Michal Lukeš says, “having to step out into the rain”: 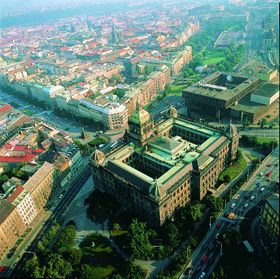 “The buildings will be connected and that’s important for them to serve as one cultural site or complex. Our main hope is that we will truly be able to change the future of the building for the better. I am confident that the new site will be perfect as a museum and that it will help change an area at the top of Wenceslas Square that is all too ‘broken’: divided by two throughways, an area until now associated with people on the street and drug users. We want this to change and for the area to serve as a full-fledged cultural site, where visitors can come to relax and to be entertained.”

That’s not to say a part of the former Federal Parliament building won’t be preserved as is for future generations, namely the assembly hall where political leaders met up until the Velvet Revolution. Other remnants will be left behind:

“The last thing we want is to freeze the space as some kind of reminder of Communism – we want to look forward. But certainly, the assembly hall will remain the same, unchanged from when politicians used the hall in the 1980s – even the original voting equipment remains. That is kind of the central focal point in the building’s more recent history and will be used in guided tours.” 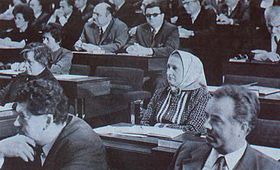 Members of the Federal Parliament, second half of the 20th century One of the tasks which will also have to be resolved will be deciding on a new name for the venue, so far undecided. Earlier, the National Museum asked members of the public to write in their own suggestions, resulting in hundreds of responses. Now the museum has decided to make those public to broaden further discussion. A final decision could be taken in the autumn, National Museum director Michal Lukeš says:

“We ran a contest offering members of the public to send us their ideas: in the end we got 617 different proposals of varying suitability. I’m not sure any of them hit the nail on the head, but we would like to see more discussion and get more response before taking a final step. Ideally, the new name should stress the role of the National Museum and hopefully be catchy. We want to decide by October, so that we can prepare the new logo for the November 17th show.”

The new National Museum building Mr Lukeš makes clear is one of great promise – an area that will come to good use. Historically it was intended to be used as parliament only for a temporary period (a new parliamentary complex had long been discussed but never realised for Prague’s Letná plain. Now, nothing is holding back the museum from creating a vibrant and modern new space, beginning with the new building’s lobby, already selling National Museum publications and gifts.

“So far everything is going according to schedule: right now we are preparing reconstruction of the old building and we are moving materials. Financially, preparations for the main building and the taking over of this one from RFE all went smoothly. Despite the economic crisis we have luckily not faced any budget cuts and have not faced any shortages. So far, everything is going according to plan.”