Photographer Josef Koudelka to give Prague museum his major works

This week the 45th anniversary of the Soviet-led invasion of Czechoslovakia was commemorated in this country. What some may not realize is that many of the iconic images from the tumultuous August of 1968 appearing in the media belong to one person – Josef Koudelka. A world renowned photographer whose career spans almost six decades and across all of Europe, Mr. Koudelka decided six years ago that he wants his life’s work to have a home in the Czech Republic. 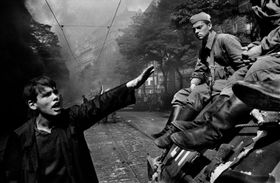 Photo: Josef Koudelka / CTK After extensive negotiations, this week the Museum of Decorative Arts in Prague signed an agreement with the artist for a long-term loan of over 500 photographs, which may eventually become a permanent gift. I spoke to Helena Koenigsmarková, the director of the museum, and asked her about the most significant parts of the collection, which will begin to arrive in Prague in the next six months.

“The whole of the collection, all of the sets of photographs are very important, not only for our museum, but it would be important for any museum that collects photographs. This collection contains all of the important series he did from the ‘60s to the last years. Of course, part of it are photographs of theater, which he did at the theater Za branou in Prague in the ‘60s. Also, the Black Triangle, the invasion of ’68 - these are probably the most well known photographs from his work, which are coming back to our memory in these days. Also the work he did after he had to leave the country after ’68 – the photographs he made in Portugal, Camargue and Paris. They are all very significant in terms of showing his kind of viewpoint, how he saw landscapes, people, nature and the change from the ‘60s to the second part of his work abroad.”

Is there something that distinguishes Koudelka from other photographers in your collection, not just in terms of what he photographed but also his style?

“Frankly, there are not photographs by Josef Koudelka in any Czech collections. That’s why it’s important that all of his work will be in the state collection, which is included now in this long-term work. And hopefully it will stay here, after his decides to change it into a gift. So, for any collection of photography, especially of Czech and Czechoslovak photography, it is a very important acquisition.” Helena Koenigsmarková, photo: archive of the Museum of Decorative Arts And will you receive mostly negatives of Koudelka’s work or prints as well?

“When it comes to photography, negatives the possession of the author, mostly, and we shouldn’t forget that he is a member of the Magnum Photo group and there are also some agreements between them regarding copyrights and author’s rights. Many of these photos are original prints or vintage prints.”

So, I guess, some of the prints are priceless.

What about your plans for the future? I know that there is a big retrospective exhibit planned for 2018. Otherwise, will these photographs be exhibited as part of the permanent collection or only in temporary exhibits?

“Our museum has a problem with space. And that’s why, finally after many years of waiting, we are not facing a reconstruction of the main building. And, unfortunately at the same time, there will also be built a new depository building for all of our collections. It means that for the next two years we will be moving and at some point the main, historical building will be closed to the public for two years. Probably in 2015-16. 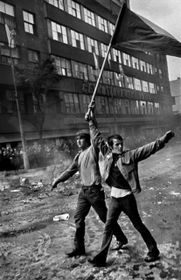 Koudelka is best known to people in this country for his photographs of the Soviet invasion. And, of course, though them he is always remembered around this time of year, but he is also famous internationally. Which parts of his work are most important and most valued abroad?

“Of course, the invasion is well known to everybody, but I think that even the collection Cikáni (Gypsies, 1975) or the experimental landscape photographs from Camargue, etc. are all very well known. And, you know, he continues to photograph, he travels to many countries to take photos, so it is still an ongoing process.”

As you said, you will be the only institution with this large collection of Koudelka’s photographs in the Czech Republic. Do you think that it will help in bringing more attention to him for local audiences and also make him a kind of centerpiece for foreign visitors to Prague?

“I would like to hope so. You know, we are missing in Prague a proper, I would say, house of photography. My wish would be to have a branch of our museum, which would be called museum of photography, because we do have the collection for it. Of course, all the famous Czech names in photography like Josef Sudek, František Drtikol and many others. And we used to exhibit their work around the world for the past 20 years. And we are asked to loan something every year for international exhibition from the work of Czech photographers from our collections. So, I believe that this kind of a permanent collection of Czech photography would be very attractive not only for foreigners but for Czech people too.” A huge exhibition of work by the world-renowned Czech photographer Josef Koudelka has just opened in Prague. Entitled Returning, it… 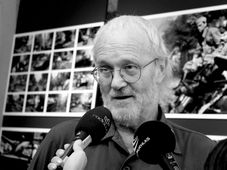 Josef Koudelka, one of the greatest living Czech photographers and the only Czech to become a member of the prestigious Magnum Photo… 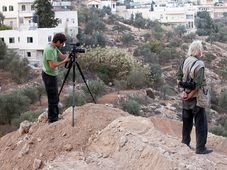 Koudelka taught me how to see, says helmer of One World film on great Czech photographer

Perhaps best known from his powerful images from the streets of Prague during the Soviet-led invasion of 1968, Josef Koudelka – who…