The Prague Playhouse, a successful English-language theatre company based in the Czech capital since 2003, premieres its new production of Charles Dickens’ timeless tale A Christmas Carol on Friday at Divadlo Inspirace. 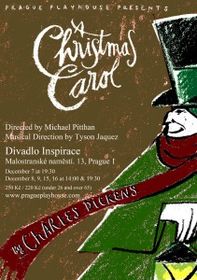 Just a few hours ahead of the premiere, the show’s producer Laura Strugar and musical director Tyson Jaquez, dropped by Czech Radio to discuss the production including how this year’s version is different.

It’s my pleasure to welcome both of you on the day of the premiere: you have to be very excited about things getting underway at last.

TJ: “We are very excited about the premiere as we have been working intensively on the project since October and have put in a lot of effort. We are kind of taking it in a different direction: our director, Michael Pitthan, has had great vision in putting the show together and we are really excited to see the fruit of our labour and see the production on stage.”

How is this production different from others you have put on before: I know that you did a different version of A Christmas Carol last year...

LS: “Last year we did a more traditional version, which was performed in a cellar near Old Town Square. This one is in Divadlo Inspirace and it is a more typical theatre space. The vision is different – more of a spooky ghost story, but closer to how Dickens actually wrote it.”

Conceptually, what are some things he did reworking the material?

TJ: “One thing that we’ve done is added in the music and really what we are trying to draw on there’s very little instrumentation – the only instruments we have are accordion and viola, and we use the viola for the lower sounds and we really go for the dark. We are drawing from traditional Christmas carols and we tend to stick with the minor keys which are traditionally sadder sounding. Our accordionist Jiří Čevela is amazing, putting together many elements including Czech ones, and we use them to create that spooky feeling that the director was looking for. We had a lot of fun working with different ideas; some didn’t work because A Christmas Carol is not a musical and so we had to find different solutions. But I think we managed to capture the vision the director was going for.” 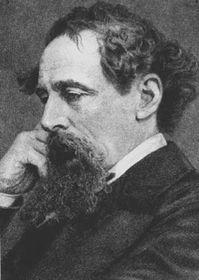 Charles Dickens I want to ask about the visuals as well: one of the images on facebook is the use of a shadow play. How were some of the key scenes handled? There’s obviously the visitation by the four ghosts but there is also the element of time – how did he or you approach those aspects?

LS: “Michael is a fantastic performer himself and besides being a professional actor he also has a background in puppetry, so he wanted to bring that in. He invited Bridget Donner a designer who also makes puppets to take part in the project, so she makes them and works them and we have some hybrids – half-human, half- puppet – and we have an actual shadow puppet scene when Scrooge goes back into his past to childhood, the Ali Baba scene. In terms of the visuals he wants things that don’t necessarily look human all the time, for example, Marley is a human body but a puppet face. That creates this unnaturalness and there is this glow, this unearthly glow about it.

“Also the idea of what Scrooge is experiencing not being reality but the past is reinforced by these bubbling lights that flow back and forth. So Scrooge is literally flown to different scenes by the ghost of Christmas past, present and future. It has a more dream-like feel to it. The director has stuck to a palette of browns and greys and blacks and he uses colour to reflect some of the emotions he wants the audience to feel: colder at the beginning and warmer at the end, almost relaxing after Scrooge’s redemption.”

In terms of some of these dramatic moments, when I think of versions I have seen in the past, or some of the movies that were made, are there special effects. I can recall the crashes of drums or the rattle of chains: have you used these or gone a different route?

TJ: “We have used some special FX, special tubes to create the sounds of bells, tambourines, drums. The chains... they are a big part; A Christmas Carol would be almost unthinkable without them. We really had fun putting that together, to come up with different sounds.”

You talked about the spookiness and the fact that A Christmas Carol is a ghost story. I wonder if there are any viewers today who associate that kind of mash-up of genres, a ghost story and traditional Christmas tale, more with a Tim Burton, This kind of mixing of genres...

LS: “I’ve wondered that myself because growing up in a Native English culture as we have you just understand that A Christmas Carol is one of THE standard Christmas stories. But unlike every other Christmas story that we read or watch, this is actually a ghost story and is quite scary. Dickens himself was quite obsessed with the spirit world and to incorporate that into a Christmas story was unusual I think even for his time.”

Through A Christmas Carol, I’ve read, Dickens reframed how we celebrate Christmas even today. A lot of those elements, focussing on charity, a softening of one’s heart, assessing one’s own life as well as reviving older customs, we have him to thank to a large degree.

LS: “Yes and one of the amazing things of Dickens is how he grew up. A lot of his books focus on the poor and poverty because he grew up in poverty himself. So he writes about the workhouses and the terrible living conditions for the poor in London in his day. AT that time it was almost impossible to change classes from one strata to the next. So for him to write about how unhappy he was about it... A Christmas Carol really opens that up.”

Scrooge is not necessarily an easy character to play because there is that gradual transition or realisation that his life has been a mistake or that he hasn’t been who he could have. I just recently re-watched the George C. Scott version which I grew up with...

...who is the actor who plays him in your production and how does he handle it?

LS: “Well the director Michael, one of his main ideas for the show was that we are all a little bit like scrooge. So actually all the actors have a chance to play Scrooge. There is a main actor, Milan Malinovsky, who plays Scrooge, and he is great and is central. But each actor trades off, in certain areas, on the Scrooge character...” 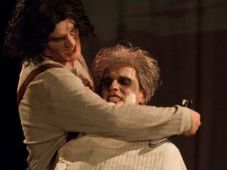