He was a phenomenal architect and intellectual. Jan Blažej Santini Aichel (usually known just as Santini) lived in the 17th and early18th century. Born to an Italian father and Czech mother in Prague, he left a legacy of great churches and non-sacral buildings around the Czech Republic. 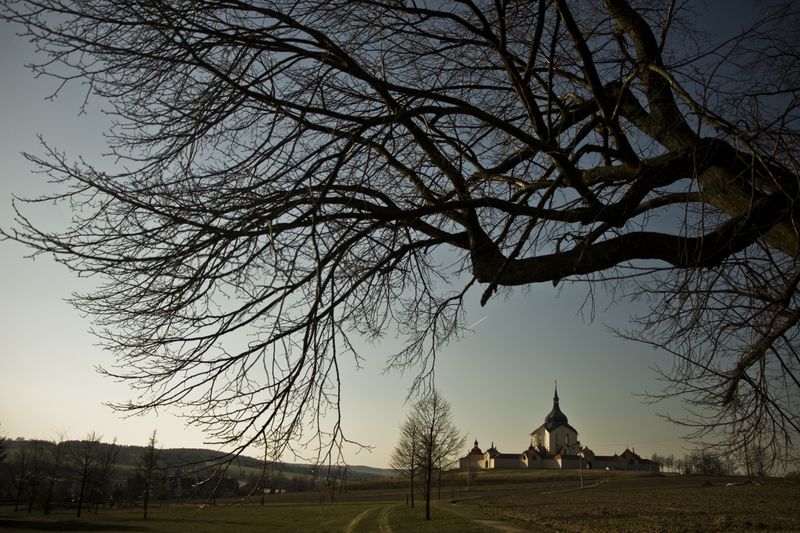 Pilgrimage Church of Saint John of Nepomuk, photo: Vít Pohanka Imagine you are standing on a small treeless hill surrounded by the picturesque countryside of the Bohemian-Moravian Highlands. Coniferous forests embrace a mosaic of fields and meadows, dotted with small lakes, and villages. And in front of you, there is a unique church the likes of which cannot be found anywhere else. It combines Baroque and Gothic elements. The architect Jan Blažej Santini Aichel clearly worked without any respect for the traditions concerning the shapes of religious buildings.

Nevertheless, he created something not just unique but also beautiful and deeply spiritual. No wonder UNESCO decided without hesitation to add this church to the World Heritage List back in 1994. But who was this architect who so masterfully combined different styles to complement the surrounding landscape? Stanislav Růžička is the chairman of the Czech Santini Society:

“Jan Blažej Santini Aichel was born on the 3rd of February 1677. His mother was Czech, and his father was an Italian stonemason. Santini was the firstborn son of the family. He was also, unfortunately, physically disabled. We know from historical records that he suffered from lameness, walked with a limp and, possibly had a humpback – but we do not know that for sure. What we do know is that Santini described himself as being lame in his writings. That explains why he did not pursue stonemasonry as his father and grandfather did before him. Stonemasonry was a very physically demanding profession but, in those days, it also belonged among the most prestigious jobs in construction.” 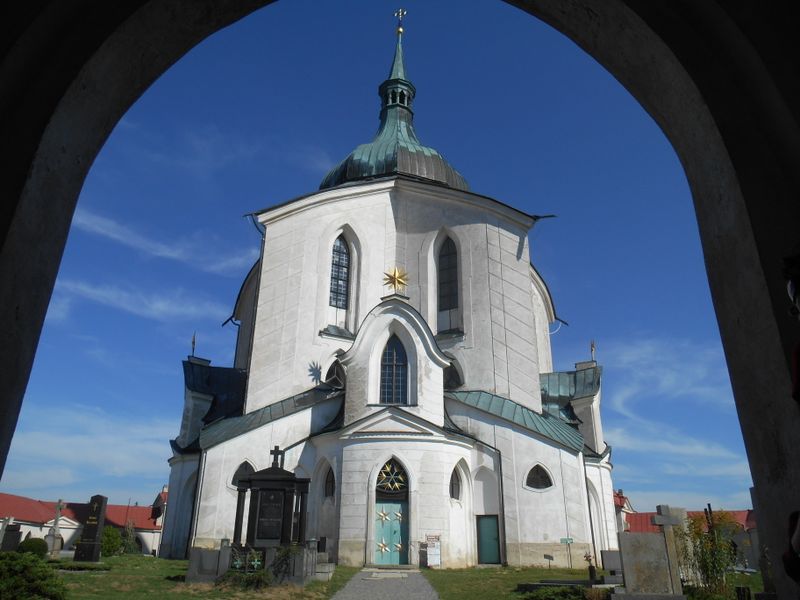 Pilgrimage Church of Saint John of Nepomuk, photo: Magdalena Kašubová Despite his physical handicap, the architect must have been a young man of enormous spiritual energy and vitality. Stanislav Růžička points out that the relatively young architect was able to understand what religious and spiritual leaders like abbot Vejmluva wanted for their monasteries. In other words, he was able to read his client’s mind:

“Santini was very educated, he was able to speak and write in Czech, German, Italian and probably also in Latin, as that was the language that he used to jot notes in his architectural plans. At the same time, he mastered what is today known as the field of descriptive geometry. The fact is that his buildings are extremely complicated. The level of imagination and skill that must have been required for their planning is indeed extraordinary. Also, the complicated floor plans of his buildings indicate that he must have been educated in fields that we would today call esoteric. He made use of the esoteric method of Kabbalah, which is the reading or transmission of Old Testament truths through numeric and geometric symbols. Santini was indeed a multifaceted artist and an intellectual in the true sense of the word.”

The architect married the daughter of his teacher Christian Schröder, Veronika-Elizabeth. The marriage produced four children but only one of them survived childhood. When his first wife died, he married again and had two more children. He worked incredibly hard, not just on religious buildings, he designed also two inns near Žďár nad Sázavou:

“From when he started his career in 1700 until he died in 1723, Santini finished over 100 projects, averaging 4 completed buildings each year. In other words, he worked extremely hard. He had to oversee the work and be present at every construction site, because, as the architect, he was fully responsible for putting his plans into action. Even his smaller buildings, if they can even be described as “small”, were all very original and imposing.”

“During the last part of his life, in the years between 1720 until 1723, about 30 of Santini’s buildings were in the process of construction. He was working on big projects in Moravia, like the monastery in Rajhrad and a pilgrimage church in Křtiny, while also having to oversee large works on the other side of the country in Plasy near Plzeň, and in Kladruby on the Bohemian-German border. The construction sites in Bohemia and Moravia, located about 400 kilometers away from each other, all required his supervision and we know that he visited each one at least two to three times a year. Not being able to ride a horse because of his disability, Santini traveled by carriage and it is reasonable to assume that he spent most of the journey productively, dedicating the time to drawing up new plans.” 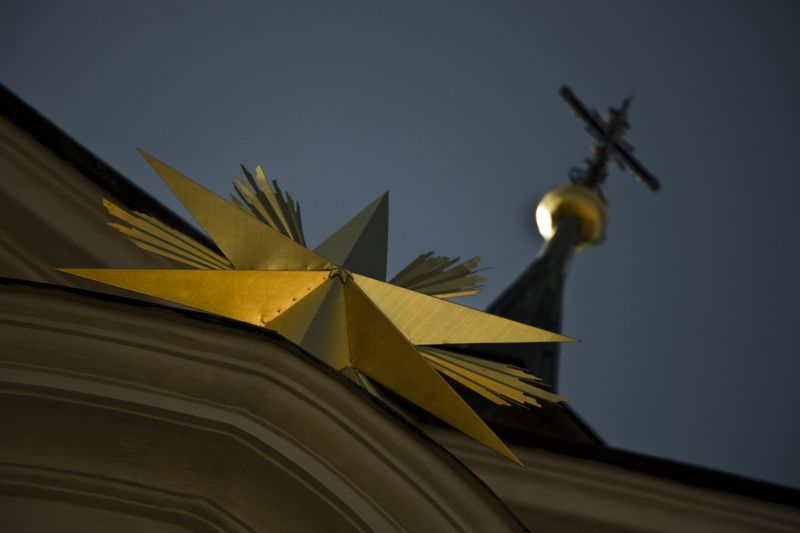 “The Baroque period represented a return to traditional values and stability after decades of tumult and brutal religious wars. The historic religious orders sought to return to the stable days of the rule of Charles IV. “the father of the nation”, which was the most prosperous era in Czech history. “

“The orders themselves were first created during that era and in the years preceding it, during the rule of the Přemyslid and Luxemburg dynasties. So, there was a real desire amongst the orders to return to those prosperous days. That was to be achieved by combining Baroque and Gothic architecture. Gothic architecture in its essence is best symbolized by the pointed arch.”

“If you look at the windows of Zelená Hora, you can see that they are pointed-arch windows. And the pointed arch was, at that point in the Baroque period, a total historicism and completely passé. It isn’t just the windows either. The placement of the church, the form of the cathedral and each attribute of the building has its purpose and is symbolic of the history and period in which the building was constructed. Because of the way it was built, Zelená Hora affects not only how we look out at the town of Žďár but also how the church looks out at the landscape. And that is symbolic of the more than 750 years of history that the monastery and church share with us here in Žďár.“

Thus, it is no exaggeration to say, that Jan Blažej Santini-Aichel was a true genius. His work is a precious part of not just Czech but global cultural and intellectual heritage. 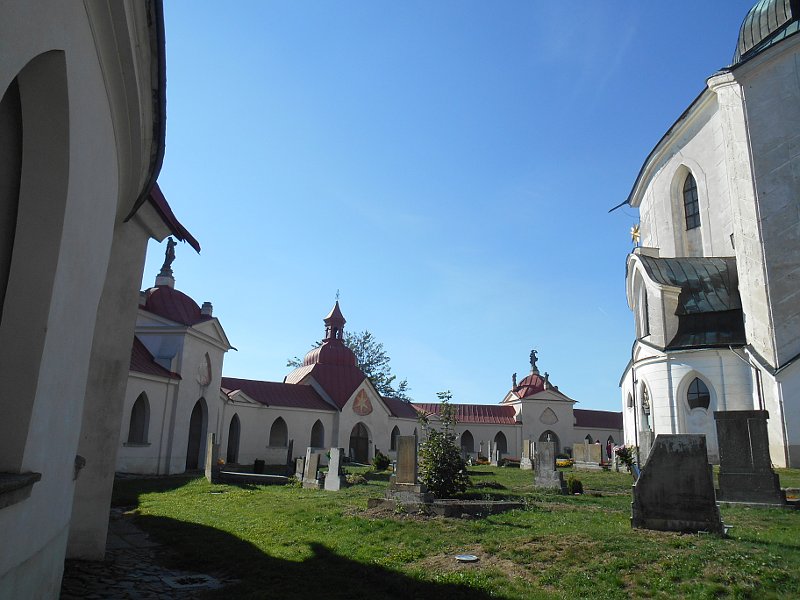 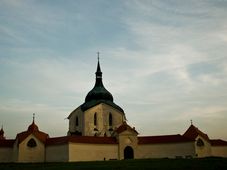 Gem on a hill: The Pilgrimage Church of Saint John of Nepomuk in Žďár

Built on a small hill called Zelená hora near Žďár nad Sázavou, it is one of the most spectacular and yet unassuming sights in the… 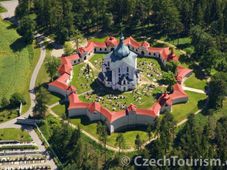