A major retrospective of the works of the great 20th century Czech photographer Josef Sudek was launched recently by the National Gallery of Canada in Ottawa – offering a new and extensive opportunity for visitors there to get acquainted with Sudek’s immense contribution and body of work. These include famous works from series like From the Window of My Studio to Night Walks. Called The Intimate World of Josef Sudek, the show should not be missed. 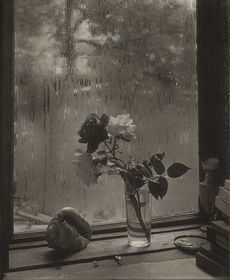 “We were given a very generous donation of Sudek’s photographs in 2010 – almost 1,700 prints – so there was motivation to put together a large exhibition. We wanted to show a Czech, not just Czech but a photographer of immense importance in the 20th century. The work is very beautiful and we felt that the public needed to get to know the work better. So that was the motivation: it was two-fold.”

Sudek is obviously very well-known here; who would you rank him beside?

“He is also very well known in Europe as well as the United States, where there have been big exhibitions of his work before. In terms of importance among 20th century photographers I think you could rank him next to a variety of figures, from Andre Kertesz to Paul Stand, not in terms of approach but in terms of overall artistic importance.

“He managed to surmount a brutal war injury, so I see him as being quite realistic in the way that he looks at the world.”

“He did work which was classified as romanticism, other work as modernism but he was true to his own story. In the intimacy of his photographs we see a struggle and it is not just romanticism; if I were going to call him anything, perhaps it would be that in his way he was a ‘realist’. Not stylistically but in his outlook: he worked with what he had - small apartment with two rooms and his darkroom and two windows, the clutter of his apartment, and he made something from all of that. He managed to surmount a brutal war injury, so I see him as being quite realistic in the sense that he looks at the world that he occupies, he has a story to tell and he responds to that. He doesn’t look for a sublime ideal – that is why I am not comfortable with his work being labelled neo-romanticist. I think his work is much more complex.”

What kind of equipment did he use and how did that formally affect his work?

“He use a heavy large format camera and when he had first started photographing he had had no other option, no 35 mm camera. One of the great draws for me is that this is work done with great physical effort. The camera was large to carry around and there wasn’t anything really random about what he photographed. Josef Sudek, photo: Miloň Novotný, CC BY-SA 4.0 “A short film we are showing from 1963 shows him with the camera, slung over his back, and he manages to get it on his shoulder with tripod despite his disability. But even after 1926, the option of the Leica was out there, sharp lenses, he still opted for the larger format because he liked the amount of detail and precision that he could get. He was of course doing contact prints for quite a long time. Early on, after the war, he returned to photography and by the 1940s he was doing only contact prints. He wouldn’t let any physical disability get in the way of his work, to what he desired to do as an artist.”

A retrospective like this one shows many, many works, divided along different themes… What are some of the most dominant?

“We start with his early beginnings and also a sub-section of his friends and fellow artists. Then we have Night Walks, From My Window, The Spirit of Place and more. If you are asking about the most dominant, though, one of the largest groupings is From My Window. I think that is a sequence or series of photographs that needs to be shown very fully because of the way he was able to, first of all, observes transformation and keep our interest very high in it because he was working in a very narrow field of perception. It keeps changing and he introduces new elements by composition and when he sees something of great interest happening on his window pane. So that is very dominant. The Life of the Object is another group. It has some sub-sections as well, his Labyrinth series.”

How would you characterize the kind of texture, the kind of light that we see in his photographs?

“What is so wonderful about his work is that he explores in depth not just reflected light but also the absence of light.”

“I think that what is so wonderful about him is that he explores in depth not just reflected light but also the absence of light. The photographs from Night Walks are very powerful. In his work he goes across an incredible range of spectrum, the different ways of observing light. It can be a small reflection of light on a simple table, or they can be shafts of light coming in through windows, he started that in his early work, almost the kind of light you would see I religious Renaissance paintings, that kind of light that illuminates and gives substance to an object.”

An example would be the photographs he took of St. Vitus’ Cathedral in Prague… 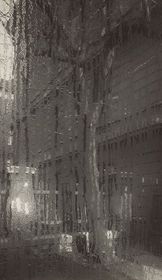 'Window of My Studio' (c. 1940–54), © Estate of Josef Sudek, photo: archive of National Gallery of Canada “Yes. Or in Invalidovna. Later, when you get into Night Walks, some of the most moving for me are some of the very dark layers of black. Some of these pictures were during the occupation by the Nazis during WWII, when there was a blackout and it was forbidden to have the lights on. He took photos in his courtyard when it was forbidden of having the lights on and taking photographs at the cost of being severely persecuted. He took them in the courtyard and he would take these pictures of the lights on in some windows. They are just spots of light and they are on the one hand a symbol of hope and also of resistance, even if they would have been ‘protected’ in the courtyard. They are wonderful photographs.”

The exhibition opened on October 28th – which marks the founding of the former of Czechoslovakia – was that a decision which was taken early on?

“I am sorry to say that no. We were very aware that it was the 150th anniversary of Sudek’s birth but it was the Czech ambassador to Ottawa who brought the other fact to my attention. There is a wonderful serendipity that the show opened when it did.” Josef Sudek: The magician behind the lens

Josef Sudek was one of the most important Czech photographers of the last century. Whatever he turned his camera to - be it Prague’s…

A new exhibition in Prague is set to display previously unseen pictures of St. Vitus Cathedral by the great Czech photographer Josef…