The KVIFF wrap-up: a chat with film critic Phillip Bergson

As the annual film festival comes to a close in Karlovy Vary, so ends a week of reports from Radio Prague on the goings-on at the Czech Republic’s foremost cultural event. Saturday evening the crystal globes will be awarded for the 44th time, and to discuss the week I had a general chat about all things film with someone who knows film festivals from every angle. Phillip Bergson founded the Oxford Film Festival, among others, he has served on a number of juries, written on film for scores of publications and has devoted a great deal of effort and interest to Czech and Central European cinema. How did he view the festival as a whole this year?

Well I think it's going very well; it's a small miracle that it even happens, in view of the international economic crisis. And they seem to have brought the films from the world, most of the filmmakers, the film people, the usual caravan of the press seem to be here, and there’ve been some parties. I mean, there wasn't a lot to drink at the opening-night party! But otherwise I think it's going well. And what is the big success of Karlovy Vary, compared with many other international festivals, is that it's an audience festival - especially young-audience - and that everybody comes, queues, gets a seat (and you always find a seat in the end, even if you haven’t bought one or reserved one well in advance) and it's a great feeling. I think it must be marvellous for the filmmaker to have his film applauded by a large crowd at midnight or in a tent somewhere. I think the atmosphere is great, it’s completely different from, say, Cannes or Berlin.

The very obvious question: how are the films?

I’ve seen some good films. I’ve just seen the new Andreas Dresen film, which is a lovely film about making a film called Whisky with Vodka - not to be obsessive, it's a very nice title for a film as well. I liked very much the Danish film Applause. So, of course, you're going to find not-good films in various sections; this reflects the world state of filmmaking. But there are good films, and I've seen some so far.

Yeah, it's always a difficulty to find films in-competition because you have an obsession to obey the rules of the FIAF, this French mafia that controls festivals, that it must be a brand-new film, or it must be a world premiere or et cetera et cetera. So, sandwiched, if that's the word, between Berlin, Cannes and Venice, it’s difficult to come up with top-quality films, obviously. But I think by now the word has got out that this is such a wonderful atmosphere, that it’s a wonderful place to bring a film, and that a filmmaker who already has been, maybe, to other festivals, or whose actual current film might be more in the mood for the audience here, will agree to send the film. And so I think, to some extent, it's not only the usual suspects, the friends of the festival who come here, the countries that support it - its always been very strong in Scandinavia I think, Denmark, Finland, Norway because they won prizes then they tend to encourage their fellow filmmakers ‘go to Karlovy Vary, don't go to Venice, don't go to Cannes” (certain films are not right for Cannes). At the same time of course, it’s difficult when the film is completely unknown maybe, or maybe [the festival’s Artistic Director Eva Zaoralova] or somebody has seen it in a darkroom or something and seen maybe only 50 minutes of it. It's a bit of a gamble. But I think the selection, certainly on paper, looks strong, and I've already seen certain films that I think are of international standard, absolutely. The only thing that surprised me a bit was that there didn’t seem to be many films in-competition. I think it’s only something like 14. And that seems a bit, maybe, weak for an international festival. On the other hand, not to forget, there is this parallel competition which is the East of the West, which I am hearing from a lot of people is becoming very interesting and that the strongest - some of the stronger - films are in the East of the West. This is the emerging countries, the Balkans, of course the Czech Republic - I think there is no Czech film in the competition, but I think there are Czech films in the East of the West. So I think between those two competitions you certainly can find something to write home about 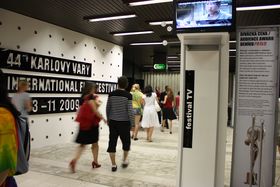 Photo: Štěpánka Budková Expand a bit, if you would, on the significance of the festival in general. Because, obviously, it’s one of the oldest festivals in the world, and I’ve met film critics and journalists here who are here for the first time and they actually didn’t know about it beforehand.

Well, this is all part of the Czech charm of keeping its treasures and its beautiful things at home and not telling foreign people about them. The same way that this wonderful liquor which is made in this city, Becherovka, is almost not known in 20 European capitals. So, Karlovy Vary: it has a difficult name for some people, if you start to say it’s near Marienbad - near the real Marienbad - then they might begin to realise what Carlsbad is. Of course it was under the shadow of Moscow, literally, under the former ‘happy times,’ and that was why the festival didn't really have a big tradition, because it had to alternate with Moscow. But I think for anybody who has been here, say, in the last 10 years - I guess the Zaoralová/Bartoška regime is 10 years or more, and it’s totally turned it around, and I think it's made something new out of what indeed is perhaps the second oldest festival in the world (in the sense that Cannes of course started in ‘39 and then the war stopped it the day it opened, and it reopened in ’46, as did, I believe, the very first festival, which was in Marienbad, was ’46). So it has long, a very long, tradition, but it had these communist years - this sort of nightmare that we don't want to think about anymore, but we have to, I suppose - which stopped it becoming on the level of Cannes, San Sebastian, maybe Mar del Plata. But absolutely, for me, it is one of the top festivals in the world, again.

Okay, you must have some tips. What do you think is going to win what?

To be honest, at this stage it’s a little difficult. I don't quite know the temperature, so to say, of the jury members. Some of the jury members I don’t really know, professionally or personally; usually you can get an idea from who’s on the jury. For example, it’s hardly a surprise that Isabelle Huppert presiding Cannes should have seen the prize go to Michael Haneke. I don’t think that’s a surprise. Even though she may have held back from the decisions in the discussions originally – you know, the jury president does have two votes, normally. So I don't know what's going to win. I would think a strong tip for actress (and this is early days) is Paprika Steen, playing this actress who’s having in emotional crisis with her children and her ex-husband in the film Applause, from Denmark. And actually I think (if there is a prize for script; I can’t remember whether they can sometimes do that), I think the film from Germany in competition, Whiskey with Vodka, should be a strong contender for a prize for script, for example. I think there will be some happy people on the closing night, some deservedly happy people.

Are there some European gems that are getting their early releases in Karlovy Vary that you think are going to end up being important? Photo: Štěpánka Budková Yes, I’m mean, there are films that have been at some other festivals, in Spain etc. I think they'll get a bigger focus here, and there are some distributors here, and I would hope that the press would write about these films in other languages, and so there's a chance. I mean, I think this is a festival where the press - the critics - are more important than the distributors. I don't think there are that many actual acquiring agents - acquisition agents. That something maybe the festival could do a bit more about, perhaps. But judging from the articles about films, I’m quite sure that a lot of the films that have not yet secured distribution, either in this country or elsewhere, will do so. I think one of the biggest successes seems to be the public response to the films of Patrice Chéreau. These are not new films as far as the rest of Europe is concerned, but it may be that they have not been released in cinemas in the Czech Republic, and it may be that a Czech distributor might pick up some of the older films, if the rights are available. Of course, there is this whole new market now of television and DVDs, maybe there are some acquisition agents from that area. But I do still think that a film should be shown on a big screen, and you can hardly get a bigger screen than the Velké kino in the Hotel Thermal. And the atmosphere when you see a film on that big screen is I think what it’s all about. So I think if there are people inside that auditorium at such a screening, I’m sure they will convey the enthusiasm for a film. It takes a while: in England even, we have quite a good team of distribution people who go to Cannes etc., but even for a film bought at Cannes, it’s one year before it comes to a British cinema, regularly. So I think there are films that are going to have a slow journey to the cinema, but I think they will get released in Europe, quite a few of the films that have been selected for this year’s Karlovy Vary.