The theatre of Spejbl and Hurvínek: A hit with Czech children since 1945

Divadlo Hurvínka a Spejbla – the theater of Hurvínek and Spejbl – has been a favorite destination for children in Prague for the past 65 years. It is home to the country’s most popular puppets, father Spejbl and his son Hurvínek. The Dejvice theater just returned to its original location that was closed down for two years due to renovation. Sarah Borufka visited the new space and even met the voice behind the puppets.

Martin Klásek plays a double role. Since 1974, he has been lending his voice to both father Spejbl and son Hurvínek, two marionettes that have been popular with Czech children for many decades. On a recent visit to the theater of Spejbl and Hurvínek, I asked the theater’s art and repertory director Denisa Kirschnerová if she could describe the theater’s two stars a bit.

“Spejbl and Hurvínek are a father and son. They represent different views of the world. So there is a certain conflict between them, it’s the adult man and the small child.

“We try to bring children modern fairy tales that reflect their world, their problems and their joys. That’s everything you need, a journey through fantasy and we try to bring humor into it as well.”

Sixty-five years ago, a theater devoted to their plays opened in Prague. For 15 years, the theater has been located in a space in Prague’s Dejvice neighborhood. But two years ago, the space started undergoing a massive renovation. It ended a month ago, and the ensemble returned to their renovated home. Mrs Kirschnerová says returning was a real pleasure.

“We are really happy that we are back, because the theater is really new. It’s beautiful here. And it feels really good to be back. It took nearly two years and the cost was really almost 130 million Czech crowns, so everything is brand new.

“It was quite a demanding time for my colleagues, because they traveled a lot, they performed abroad and also around the Czech Republic. They are happy to be back and be settled again. For us, there is some new feeling about it.”

The return to the new space coincides with many anniversaries for the theater of Spejbl and Hurvínek, and also for the two main characters, says Mrs Kirschnerová.

“It is a great gift for our puppets. Mr. Spejbl turned 90 this year. Our theater has been active 80 years, we’ve been in Prague for 65 years, and the other two main characters, Mánička his friend and his dog, Žerik, are celebrating their 80th birthday. So it’s a year with many, many anniversaries, and we are happy that we can celebrate them here. It’s great.”

The re-opened theater also boasts a puppet museum. On display are some works by Jiří Trnka, one of the Czech Republic’s animation greats, but most of the exhibits are the theater’s own marionettes. Mrs. Kirschnerová again.

“I even remember some of them from the time when I was a child and I saw them. But the museum is not open independently, only during our performances.”

Mrs Kirschnerová led me to one of the museum’s display cases, which features puppets from one of Spejbl and Hurvínek’s classic plays.

“It’s probably our most successful performance, Hurvínek among Beetles. It was a very special performance because Hurvínek appeared in the world of beetles. He became small because he tried to initiate a ghost, and because he wasn’t supposed to do this, the ghost shrunk him, and sent him to live among the beetles.

“There, he met a female beetle who became his friend. And he got scared because he discovered that he had killed the father of this beetle, when he was still a human, by putting him in a match box and forgetting about him. He was very sad about this.”

The play is a good example of the educational theatre that Spejbl and Hurvínek sometimes put on, says Mrs Kirschnerová.

“It has such a strong ethical aspect. It was performed during the Second World War. And it had this theme that each creature has their own right to live. Children liked it very much and we always brought it back on stage after some time. This is a puppet from one of the performances, I think from the eighties.”

From the museum, we continued on to the auditorium, which has been completely redone.

“So this is the space where the audience sits, and it’s very modern yet classic, because they followed the previous design of the building, which is from the beginning of the 20th century. So it’s a nice combination of these styles.” 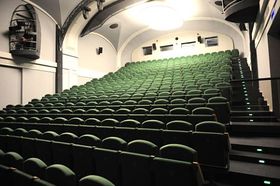 Photo: Divadlo Spejbla a Hurvínka How many seats do you have?

And does a show ever sell out?

“Yes, usually it is sold out, especially during the week for the children’s performances. Of course sometimes it happens that a person does not come, so I can’t say it’s always full, but we are happy that people are still coming.”

Considering the two puppets have been around for nearly a century, it is quite a feat that their own theatre, which has produced some 250 original plays, continues to draw crowds. Do plays performed on its stage reflect the changing times in the Czech Republic? Mrs Kirschnerová again.

“It is natural that it reflects because without, it would not make sense to continue the theater. It’s the main theme, to reflect the world as it is at present. Since the time they started to perform, in the 1920s of the past century, they reflected the war time, the communist era, they did reflect the Velvet Revolution and they do also reflect the present time, at least we as authors hope so.”

Photo: Divadlo Spejbla a Hurvínka The ensemble has not only performed in the Czech Republic. The father and son puppets have been to 31 countries, including such remote locations as Egypt, Japan and the United States.

“It’s interesting that people everywhere around the world are the same. The main things, they laugh at the same places.”

And so it doesn’t come as a surprise that Spejbl and Hurvínek were chosen to host the Czech day, to take place on May 17, at this year’s EXPO in Shanghai – in Chinese.

The episode featured today was first broadcast on April 30, 2010. 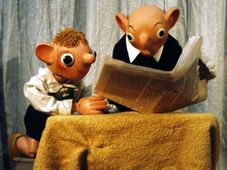 The theatre of Spejbl and Hurvínek: A hit with Czech children since 1945 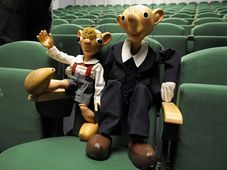 After two years of reconstruction, Prague’s famed marionette theatre “Divadlo Spejbla a Hurvínka” is reopening its doors on Thursday.…