František Matoušek’s paintings are instantly recognizable because of the material he uses, instead of painting on canvas, Matoušek stretches different varieties of denim over his frames. Often, he distresses the fabric, removes threads and roughs it up, so the texture of the denim becomes an element of the paintings’ motifs.

At a recent guided tour of his exhibition “De Nîmes”, the artist explained his preference for the unusual painting surface.

“My use of denim is connected to my childhood and growing up under the so-called socialist system. I was yearning for freedom and the free world. For me, jeans, jean jackets and so on symbolized America. Jeans were the epitome of the desire to live in a free environment, where you can travel, listen to the music you like, read the books you want to read. So my interest in denim really goes back to that time in my life.” František Matoušek - 'Wen Kroy' A central theme in Matoušek’s work is memory and he explores it on several levels, in the choice of his subjects as well as in the choice of the medium he works with. Jaroslav Anděl, the artistic director of Prague’s Dox gallery that is showing the paintings, explains why the choice of denim carries more than just a personal significance.

“His choice is very interesting because fabric itself has a quality that is related to memory, it’s a cultural product that has its own history, and that’s also the very specific case of denim. For him it was a symbol of his childhood and teenage years. But of course denim, as the origin of the word indicates, is also related to European history. So you can see just by this one example that there are layers of time and layers of memory.”

The exhibit’s title is derived from the French expression “serge de Nîmes,” a sturdy fabric from the southern French town of Nîmes that was the first version of denim cloth. A sort of mid-career retrospective, the exhibit shows paintings exploring various themes, amongst them family history. 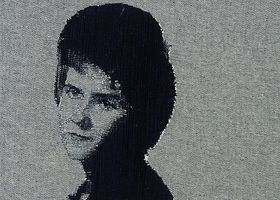 František Matoušek - 'Jana' In a portrait of his mother titled Jana, Matoušek explores the theme of memory and plays with it, weaving together several levels of time. His method of blending old family photographs with modern elements results in a fresh take on his own family history.

“This specific painting is based on this color portrait over there, of my mother. My grandfather painted it in the 1950s. She was about 15 or 16 years old. I used it as a starting point for this portrait. And I dressed her in a jacket that I owned at the time, instead of the blouse that she is wearing in the original picture. I wanted to know how that would change her. Maybe also what she would be like if she was a teenager today, I was interested in seeing the transformation.”

Scenes of New York are another topic of a series of Matoušek’s paintings, after he found himself very impressed with the city on his first visit in 2000.

“New York was a vision of something that didn’t exist. There was no New York for us, or for me, when I was young, in the 1980s. Now, it still stands for freedom and it is a Mecca of contemporary art, a fascinating city in so many ways. When I first visited there, I was almost overwhelmed by how great New York is, it was beyond my imagination.” 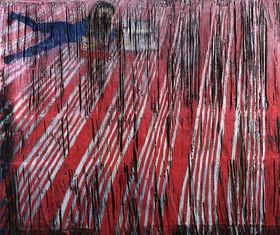 František Matoušek - 'Fixy' Matoušek’s painting style is quite difficult to describe. He uses mostly acrylic paint and works with the texture of the fabric to create his images. Often, his painting style is reminiscent of the impressionists. With a few dots, he manages to create skylines and landscapes that are instantly recognizable as such. But for other paintings, he chooses a style that is much more clear-cut and high contrast. The artistic director of Dox gallery, Jaroslav Anděl, says this makes him unique.

“What is quite unique in his case is the diversity and range of both subject matters and his stylistic approach in terms of painterly style. When you look at his pictures, you can see that each of his paintings is unique in terms of painterly devices and stylistic means. He has a signature style. But it is not, as often is the case with painters, just one or two formal elements, but rather the way he puts the many different elements together.”

František Matoušek Since the birth of his children, Matoušek has turned to painting intimate family scenes. The theme of home is a rare one in contemporary art, and often, artists who explore it tend to do so in an unconventional way. Matoušek does not challenge accepted family conventions, but neither does he portray an idyllic world. In those latest paintings of his, he captures moments of harmony and peace but also worry and fear. Is he considering turning the focus back on New York, or will he continue working with home life?

“I don’t really know if I will go back to painting New York. It remains to be seen. But as far as painting children is concerned, I hope that I can paint them when they are older, when they start going through puberty for example. Who knows if they even want me to paint them and if I live to see them when they are teenagers. But that could be exciting. I’d be really interested in the development, it could make my work complete. Right now, the paintings are rather sentimental, and later on, they could have a different mood when the children get older. But I don’t know. I don’t really like planning too much in advance.”

Despite the fact that František Matoušek is considered one of the most influential and innovative painters of his generation by his peers, the show at Dox is his first solo-exhibit to date in a museum-like environment, says Jaroslav Anděl. 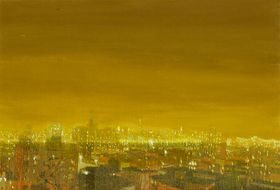 František Matoušek - 'New York' “This is his first museum exhibit in his life, so that tells you something about the Czech artistic scene, because while he is not regarded as the most famous artist, he is definitely recognized among his peers. Yet this is his first exhibition outside of a commercial gallery, but in a not-for-profit, non-museum like institution. And his contemporaries in the West, if you look at their CVs, they have tens or even more solo exhibitions on it. So I think that tells you a lot about the character of the Czech artistic scene.”

The exhibit “De Nîmes” runs at Dox gallery in Prague until the 15th of March. 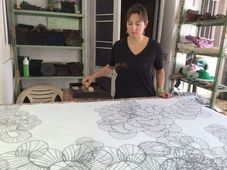 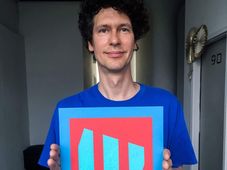