An interview with the best loved of all Czech actors

For this week’s programme, we have something of a treat: a long forgotten interview from our archives with someone who is nothing less than a Czech legend. If you ask just about anyone in this country who is the best loved Czech actor of all time, you will almost certainly hear the name Jan Werich. Several generations of Czechs have grown up to love the larger-than-life roles he played, his distinctive and deep voice, and his wonderfully expressive and humorous face, immortalized in films that span a career of fifty years. Born in 1905, Werich first shot to fame in the late 1920s, when he joined forces with his friend and fellow actor, Jiří Voskovec and the composer Jaroslav Ježek. Their satirical left-wing musical cabaret, the Osvobozené divadlo, or Liberated Theatre, was immensely popular in the decade leading up to the Second World War, and its songs are much loved to this day.

During their wartime exile in America, Voskovec and Werich continued their collaboration, and their satirical radio broadcasts to their occupied homeland became legendary. While Jiří Voskovec remained in exile, Jan Werich returned home after the war, and despite the constant attention of the censors, he continued his successful career in communist Czechoslovakia. His collaboration with the famous puppeteer, Jiří Trnka, led to some wonderful modern fairytales, and he also starred in some of the most popular Czech films of the 1950s and 60s. By the time Jan Werich died in 1980, he was a true cultural institution.

So you can imagine my delight, when I came across an interview with Jan Werich recorded for Radio Prague’s service to Britain and Ireland in 1960, on the occasion of the actor’s 55th birthday. The interview starts in a rather unusual fashion. With typical humour, Werich agreed that he would only give the interview on one condition, as we’ll now hear, as we go over to Radio Prague’s Kevin Stewart in February 1960.

Kevin Stewart: “After a little more encouragement and persuasion, Mr Werich agreed to come along to our studio, but on one condition – that we sing ‘Happy Birthday’ for him. And because a man must keep his word, we were forced to sing. We hope you’ll forgive us if our singing is slightly out of tune, because it’s not exactly in our line.”

[He and colleagues sing ‘Happy Birthday’]

KS: “So, we satisfied Jan Werich, and he in his turn fulfilled his promise. He came to the radio and answered the following questions…”

KS: “Now, Mr Werich, you’ve been to Britain several times, what would you say interested you most?”

Jan Werich: “I’ve been in Britain three times altogether. The first time was in 1945, just after the war, and then in 1956 and 1957. I like London very much, I have to tell you sincerely. I was coming from New York in 1945, where I lived during the war, and I like New York. New York is a terrific city. It’s a great city, and mean of course, because they don’t have time to be nice to you. Of course I’m exaggerating, but my feeling was – maybe because I was there as a refugee – that they don’t have time to stop and ask you whether you need something or not. But I like New York, especially the old part of New York. When I came to London, suddenly I realized that what I liked most in New York was a copy of London. You know what I mean? I wish I could go to London soon.”

KS: “And I’m sure that many people in Britain would also like to see you there soon too. Now what about the theatre in London? Did you see any interesting plays while you were there?”

JW: “Yes, some were very interesting, like Under Milk Wood by Dylan Thomas. It was a very interesting performance. I think it would be worthwhile to try a translation here in this country and do it. It’s a very hard job, of course, to translate it, but I think it was the most interesting play I saw there. And then I saw of course some Shakespeare, and some very nice performances in Stratford. And there I saw an actor who I think is, if not the best… it is very hard to say who is the best actor… I am speaking of Emlyn Williams. I think I can’t imagine anything better than his Iago. I have seen a lot of Iagos. I saw in New York a very nice performance of Othello with [Paul] Robeson. But Emlyn Williams, I think, was of all Iagos the best Iago I’ve ever seen.”

KS: “Now what are your favourite authors?”

JW: “I like Shakespeare very much and I like Moliere, and I think everybody has to like these people, because there is always something to read. I like Hemingway of course, I like Camus and I like Shaw. I can’t tell you off hand like this. I would have to think a long time, because I don’t just want to say names, you know? Of course I like Chekhov very much. I think Chekhov is one of the best authors for the theatre, and he started the realistic movement in the theatre, though I’m not one of those actors or theatrical people who just swear on realism only and nothing but realism. I don’t believe in methods. I think Stanislavski wrote a marvellous book, which would help an actor, but which can’t make an actor of a man just by reading it. And then Thurber I like very much.”

KS: “A favourite of mine too.”

KS: “Now you say that Shakespeare, of course, is included. There have been considerable rumours - and in the newspapers - that you’ve expressed a desire to play Falstaff.” 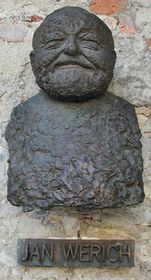 JW: “I would love to. I would like to get Falstaff out of the play, Henry IV, and just to live the story of Falstaff going to war. I don’t know if I will succeed or not, but I am trying hard and I think I will do it.”

Jan Werich never did get to play Falstaff on the stage. This was primarily because of bullying by the communist authorities, who never quite trusted him. But he did make his own translation of both parts of Henry IV, which was published in 1969, with illustrations by Jiří Trnka. The book was accompanied by a record with a couple of scenes from Henry IV, Part 1, which gives a tantalising flavour of what a great Falstaff Werich would have been.

KS: “You’ve spent a great deal of your life making people laugh and portraying the humorous side of life. Now what do you yourself find funny. What makes you laugh?”

KS: “Now to go back to your visits to Britain – you appeared on television.”

JW: “Well, I was invited by BBC Television three years ago. They put me in a programme called ‘Tall Stories’. I enjoyed it very much. I don’t know whether the audience enjoyed it, but I was very pleased and I enjoyed it.”

KS: “What about your story?”

JW: “I came from Italy that year and people mistook me for Hemingway. So I told a story of a girl who thought I was Hemingway and wanted me to sign a book for her. And she said, ‘Well, you are that man who has written The Old Man and the Sea!’ So I told her I was only the old man and not the man who has written it. And then she said, ‘You no Hemingway?’ and I said, ‘No, I’m not Hemingway, but I promise that next time I’m born I’ll be Hemingway because it pays to be Hemingway.’ And she said, ‘So you no Hemingway, so what are you?’ And I said, ‘I’m an actor’, and she said, ‘Actore only?’ And that was the last I heard from her!”

KS: “Now, this likeness between yourself and Hemingway often crops up, but there’s another similarity between you. You have a common hobby, I believe, and that’s fishing.”

JW: “Unfortunately only the common hobby, you know…. Of course, he likes to fish, I like to fish, and he likes to hunt, I like to hunt. Of course, he fishes for big fish, I fish just for small fish, because he can go deep-sea fishing. And he hunts big game and I hunt just hares and pheasants. But I think the fun we have is the same. Though, I have to tell you that five months ago I caught a big fish and I’m not exaggerating, I caught a salmon – well in pounds it would be 12 or 13 pounds, a 13 pounder…”

JW: “This is a big fish, I think. Of course Hemingway caught bigger!” VOA: 75 years of station many Czechs tuned into across Iron Curtain

Many looking for an alternative to state-controlled media in communist Czechoslovakia tuned into to Voice of America, which was founded… 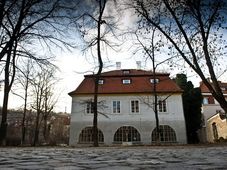 Future of historic Werich Villa decided after years of speculation

After years of speculation regarding its future, the famous Werich Villa on Prague’s Kampa, once the home of the famous Czech actor…