You may be surprised to hear that one of the events to mark the hundredth anniversary of the foundation of Czechoslovakia was held at the Faculty of Divinity at Cambridge University in Britain. On October 29 a plaque was unveiled commemorating a secret academic link set up between the university and Czechoslovakia at the height of normalisation in the 1980s. Czech and Slovak students who found themselves unable to go to university because they or their families were out of favour with the communist regime were given the opportunity to study secretly for a Cambridge University degree. Under cloak-and-dagger conditions academics would travel to Prague to give lectures at underground seminars on such hot political topics as the early Christian church or New Testament Greek. David Vaughan picks up the story. 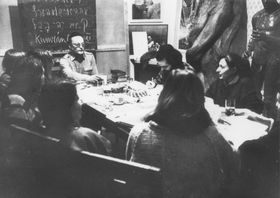 Underground seminars, photo: Courtesy of the Jan Hus Educational Foundation The idea of putting up a commemorative plaque came from former students who had taken part in the scheme as a way of thanking the university and reminding the younger generation in both countries of the realities and surrealities of living in 1980s Czechoslovakia. At the height of normalisation in 1980, a group of British academics set up the Jan Hus Educational Foundation to support the principles of independent education in Czechoslovakia. They had a network of underground contacts with their Czech and Slovak counterparts, many of whom had been sacked from their academic positions after 1968. The secretary of the foundation at the time was Barbara Day, who spent her time coordinating the clandestine contacts between the two sides, trying to avoid the attention of the Czechoslovak secret police. Today Barbara lives in Prague. I met her to talk about the secret seminars, and she began by telling me how it all started.

“Many young people were unable to attend university because under the regime they and their families really had to be part of the system. Any independent-thinking young people were simply not allowed to continue at university. Wanting to learn and wanting to study, they started getting together in small groups in homes. Nobody has any idea how many of these groups there were, but they studied together and some of them were able to bring in teachers who had similarly been thrown out of the universities. One of these was the excellent teacher of Jewish Studies, Milan Balabán, who at that time was washing pots in the kitchen of the Slovanský dům restaurant.”

One problem was that the students going through these seminars were not able to get any kind of official recognition for their studies. 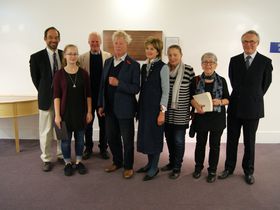 Cambridge group, October 29, 2018, photo: archive of Barbara Day “No. At the time I was working with the Jan Hus Educational Foundation that was sending lecturers from Britain – secretly of course – on tourist visas, to help with the seminars, to teacher the young people and take them the latest books and literature. But the more our lecturers went to Czechoslovakia, the more they realised that there was a need for consistency, that there needed to be properly taught courses. So they worked with the students on setting up courses that were at the level of university courses. This was how the idea came through that it was also necessary to enable these young people to take some qualification, because without a qualification what happens in society is that you don’t get into the position of being part of the continuity of education. This is serious not just for the young people themselves, but for the whole of society. What was happening was that the young people who did take up university places were not the ones who thought independently and originally, which is why nowadays people are complaining about the education system. It’s this break in continuity, that under communism for two generations there were people becoming qualified – especially in the humanities – who were not the best people, who should not necessarily become leaders and educators. Even after 1989 the young people who attended the seminars were kept out of the universities on the grounds that they had no qualifications.” 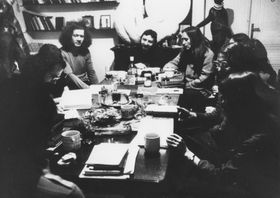 Underground seminars, photo: Courtesy of the Jan Hus Educational Foundation “Now those who obtained the qualification are recognised, and it was the students themselves who went ahead and made sure that happened. The qualification was nostrified by the Charles University…”

That means it was given the official stamp of approval.

“Exactly. But there were only six who actually took the qualification. There were more following the course, but the exams were very arduous, very difficult, especially if you had a manual job by the day. You were exhausted by the evening, when you would attend a very academic seminar and then you were expected to write essays. Eventually, under very difficult, clandestine circumstances you had to write the exam.”

So the idea began with theology. Did it grow beyond that?

“Our first subject was philosophy, which we originally were teaching, and that was what we wanted to find a course for. But it was very difficult to find an institution in Britain that would agree to this.”

So you were looking for a British university, a partner that would be willing to provide a framework for these degrees, so that they would be recognised as a degree of that university.

“Exactly. And most institutions simply didn’t get the point. They didn’t understand that these students had to study clandestinely, that they had to take these exams under a code name, they couldn’t take them under their own name, that if the secret police got any whiff of this, then the whole thing would be destroyed. We searched in several places. My colleague Roger Scruton was most active in this, using all his contacts in the universities, but eventually it was the Cambridge University Examinations Board that agreed to this with respect to one particular course, the Cambridge Diploma and Certificate in Religious Studies. That was where it matched up with the students we knew about already in Prague, who had already been studying Jewish studies for some months or years.” 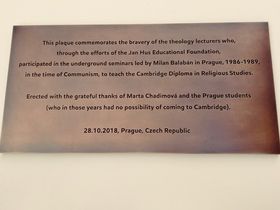 “They did ultimately qualify. All the examinations had to be spread out over several years because they were taking four subjects: Old Testament and New Testament studies, Judaism and the Early Church. They began studying in 1986 and the first examinations were in the summer of 1989. In 1990, of course, these particular students were far to busy even to think about examinations, but they actually went on to complete all the exams and get the qualification by 1992.”

And what are these students doing now?

“Several of them are retired. One, sadly, has died. He was a very interesting person. We didn’t know it at the time, but he was an underground priest. So, after the Velvet Revolution, he moved into his calling in the full way. Another one became very high up in the Ministry of the Interior, another was a security expert, one was a nuclear physicist, one was a conservation expert and one became a diplomat and at one point deputy foreign minister.”

You’ve talked about the lasting legacy of mediocrity in the universities, but at the same time I think that what you were doing is an illustration of how something, even if it’s on a very small scale with just a few students, can make an impact in the long term. Since the fall of communism, you have managed to point to a certain set of values which are essential in order for higher education to work. 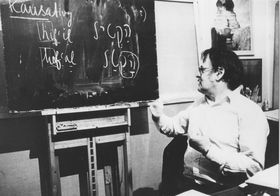 Underground seminars, photo: Courtesy of the Jan Hus Educational Foundation “Yes. I think what happened with the underground seminars is that you got really down to the very heart of what education is about. People had a need to learn, a need to study. I think we see this with all the people who went through the underground seminars – not only the Cambridge Diploma seminar, but others as well. There were several very important seminars in Brno. When I meet people who attended them nowadays, they are people who are really aware of what is going on, who are open to change and have a sense of what really matters, what their values are in life.”

You have just come back from Cambridge, where you took part in an unveiling ceremony which remembers this work. Tell us more about that.

“One of the students, Marta Chadimová, came to me with the idea of thanking the lecturers properly. They came in their own time, using their own money and it was also quite dangerous for them to come, although not as dangerous as for the students here. She wanted to leave a permanent record and she had the idea of a plaque to be put up in Cambridge. I approached my former colleague, Andrew Lenox-Conyngham, who had organised all the Cambridge Diploma seminars. He went to the Regius Professor of Divinity in Cambridge, who was amazed by the story, had never heard it before and made everything possible for the plaque to be installed in the Faculty of Divinity. 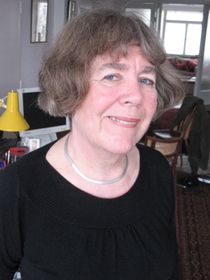 Barbara Day, photo: David Vaughan We all assembled there the day after 28 October, the hundredth anniversary of the foundation of Czechoslovakia. There were people from the Jan Hus Foundation there, there was Marta Chadimová, and she brought her daughter, because she said that what really inspired her to do it was the realisation that many of her daughter’s school friends did not know about what had happened and the way people lived in the period under communism.”

You’ve mentioned the sense that the underground seminars enabled people to focus on the fundamental importance of education, the deeper relevance of education in our lives. Do you think that you’re going to be able to continue in the future with the Jan Hus Foundation to help this to continue as a thread in the Czech education system?

“I think that the foundation, now based in Brno, is doing that. It works not only in the universities but in the secondary schools as well. There’s an essay competition every year on the freedom of the word. And I know that Marta Chadimová is very happy with the installation of the plaque and the ceremony. But she also feels that we could go on and that there must be more ways of building on what was really a very important action. I think that at the time we were doing it we were simply getting on with something that had to be done, but in retrospect it was meaningful.” 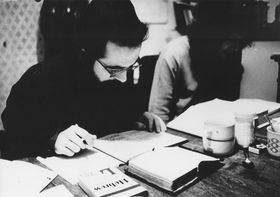 Underground seminars, photo: Courtesy of the Jan Hus Educational Foundation Do you think that it is important in both directions? I’m sometimes surprised how little people in Britain seem to know about the realities of Central Europe today.

“People tend to think that once communism was over everything turned round and changed totally, that attitudes changed, behaviour changed. But there are still a lot of complexes left, still a very strong mindset even among people who, let’s say, were on the right side of history. They still find it difficult to shake off the legacy of fear, of uncertainty, mistrust. What I fear is that there was too much done to say, ‘let’s put it behind us, let’s forget about it.’ But you can’t come to terms with something unless you remember it.”