Few pieces of music could be said to capture the spirit of the Czech landscape more vividly than Bedřich Smetana’s symphonic cycle, Má vlast – My Homeland. The cycle is also a symbol of triumph over adversity. By the time he completed the work at the end of the 1870s, Smetana was almost totally deaf, living in isolation and far from the musical life of Prague. This and other aspects of the composer’s eventful life are captured in a new play by the American writer Stephan Delbos, which will be premiering in Prague at the beginning of March. David Vaughan went along to a rehearsal to find out more about the play from its author. 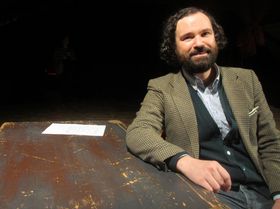 Stephan Delbos, photo: David Vaughan We are in the Kolowrat Theatre, a wonderful Renaissance building, right in the centre of Prague on the Ovocný trh – Fruit Market. I’m joined by Stephan Delbos, whose play is just about to be premiered here.

Tell us about this play.

“The play’s title is ‘Deaf Empire’ and it’s about the life, times and the music of the great Czech composer, Bedřich Smetana. It looks at thirty years of his life, from 1850 to 1882, and that space of time is basically the span of his career.

“In 1850 he’s still trying to make his way as a young composer and having to supplement his income with the teaching of all sorts of different students, including Emperor Ferdinand IV. The beginning of the play is basically the beginning of his career as he’s trying to establish himself as a composer. But he is also trying to establish Czech music and Czech themes and melodies as fit for classical music. We end up in 1882, which is the first complete premiere of Má vlast – My Homeland or My Country in English – and that is certainly his most famous work.”

We are talking about a time of dramatic changes. In 1850, when the play starts, it is just after the failure of the revolutions of 1848, which brought the whole Czech national revival to an abrupt halt. Smetana even went abroad for several years, but he came back to a second career and enjoyed immense success. And then there is the final tragedy of his deafness. 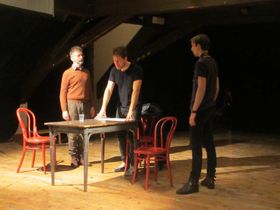 Rehearsal of 'Deaf Empire', photo: David Vaughan “The thing that I think is so interesting about Smetana is that you have the deafness, as you mentioned, but you also have the death of his first wife and three of his children, so there is that tragic element of the story. He went deaf when he was fifty years old, about ten years before he died, and he wrote almost the whole of Má vlast while he was deaf. So there is the tragedy, the struggle, the late triumph and then also the nationalist element of him trying to become not just a great composer, but a great Czech composer. At that time Czechs were considered possibly great practising musicians, but they weren’t considered to have the creative genius of a Mozart or some of the Viennese composers. So he’s faced with a lot of pressure from that side as well.”

The play has a rather strange title: ‘Deaf Empire’.

“Strange in a good way, I hope. Obviously, we’re in the time of the Austro-Hungarian Empire. The powers that be in that sense were purposefully deaf to his music and to the idea of Czech music being fit for opera or classical music. And then, obviously, his deafness is a central part of the second half of the play, as well as the sense that he is creating his homeland, his empire of music and through his own deafness is able to create this world of music.”

You have all the elements here for a fantastic play, but you still have to create a story, put it all together in a way that is dramatic and also has the necessary intimacy of a small theatre like this. You also have to get across something of the music itself. Quite a tough challenge… 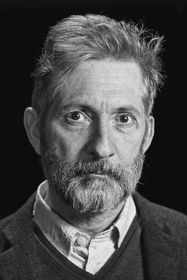 Gregory Gudgeon, photo: Emilio Bellu “Any time you’re looking at span of time of thirty years, or just looking at a figure’s life and work, obviously you can’t retell the entire life, so I chose episodes and turning points that are dramatic and also fit together and tell a story. In the play we do not just have Smetana himself, but we were really trying to recreate the era. So Jan Neruda the poet is there and plays an important role with Smetana. In terms of the music it’s not a complete orchestral production or anything like that, but several of the cast members are doubling as musicians, and so we have musical interludes, we have music that’s written into the script, and so the music and the sound, and trying to convey the inner life and the inner workings of a musical mind is central to the whole vision of the play.”

You focus on certain key episodes or key aspects of Smetana and his life and personality.

“You mentioned 1848 as the violent end of the Czech revival, the cultural revolution, and Smetana was involved in that. The play begins in 1850 and we have the first mythical meeting between Smetana and Neruda. Neruda was much younger and was still ready to go and put himself on the barricades, but Smetana at this point has already done that, has lived through the failure of that, and now has a family and practicalities to think of. We see the premiere of The Bartered Bride, Smetana’s first great success. We see different moments of the composition of Má vlast. We see the key moment when he goes deaf and we see him struggling through the treatments that he was put through, locked into a silent, dark room for a month at a time and things like that. And then we see him struggling through that deafness and trying to continue to create. One of the difficulties of his later life was not simply that he went deaf, but when he went deaf he was no longer able to teach or have a public life, so he moved out of Prague to one of his daughters’ farmhouses in Jabkenice, and he sold all his previous work, sold all the royalties for a pittance. 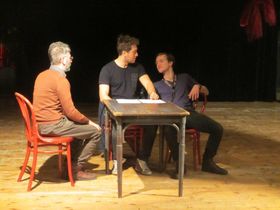 Rehearsal of 'Deaf Empire', photo: David Vaughan “So he was at the top of the musical food chain, laid the cornerstone of the National Theatre, but then shortly thereafter he was living in poverty and obscurity, and worsening mental and physical health. We see all that and go on that journey with Smetana.”

You can still visit the house where he lived in Jabkenice. It really is in the middle of nowhere, in the woods some fifty kilometres north-east of Prague. You can imagine this once celebrated composer leading a completely isolated life there.

“Exactly. I think it was the hundredth or two hundredth show at the National Theatre, and they chose The Bartered Bride for this special occasion, but he wasn’t even invited to come.

“I think nowadays Smetana is taught in schools, there are many folk songs and children’s songs that use his melodies, but just behind the veneer there’s a much more complex story of his life and the struggles that he went through, and that’s what we’re trying to get at in the play.”

Ultimately we can see it as a victory, because even when he was deaf he managed to complete the Má vlast cycle which today is his most celebrated work.

“Yes, one of the questions of the play is the idea of single-minded dedication to art – in this case music – and we follow Smetana through the ups and downs: amazing successes and triumphs and then devastating losses and defeats. Ultimately, I think it is a triumph for him.”

And can you tell us more about the production, here in the Kolowrat Theatre? 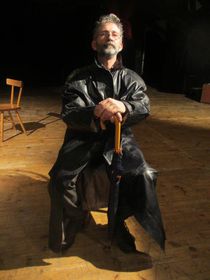 Gregory Gudgeon, photo: David Vaughan “It’s in English with Czech surtitles. It is directed by Amy Huck. Gregory Gudgeon, who is an acclaimed British actor, stars as Smetana and we have a number of other well-known Czech actors. It also mixes elements of music. As I mentioned, several of the cast members are musicians, so we have strings, piano, we have saxophone, guitar and mandolin. Smetana is famous for taking melodies – rural, peasant melodies – and bringing them into the realm of symphonic classical music. When you look at what is probably Smetana’s most famous melody from the Vltava section of Má vlast, that melody has a very long history – through travelling Yiddish theatre, even after Smetana we hear it in Brecht, we hear it in the jazz standard Dear Old Stockholm and even into the 21st century.

“We’re not trying to present a historical re-enactment. It is certainly researched and based in actual events, but the subtitle of the play is ‘Replaying Bedřich Smetana’, so we’re trying to bring him back to life and bring the music back to life, and to look at these events and characters in a way that’s vibrant, immediate and relevant for what we’re all facing now.”

And we’re here at the theatre, which means that you as the author are in some way involved in the production. What is your role?

“Along with the whole Prague Shakespeare Company, I’d like to start by thanking Dominika Kolowrat, Maximilian Kolowrat and Francesca Kolowrat for their generous and selfless support, without which we wouldn’t be here. I’ve been here to see and listen, and tinker with the script a little bit here and there, and to talk to the actors and get their feedback. I’ve also tried to provide a little bit of the historical background and some of the character – where the characters are coming from and what they’re thinking about. But at this point it’s really in the director’s hands and in the hands of the cast.”

The show will be performing throughout the first half of March.

“The show premieres on March 3 and then will be performed on March 4 and 5 and the following weekend with a second run of two dates, 9, 10 March.” 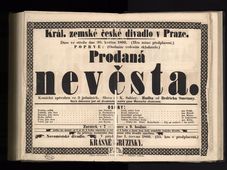 An exhibition mapping the famous foreign productions of The Bartered Bride, perhaps the most popular Czech opera, gets underway at… 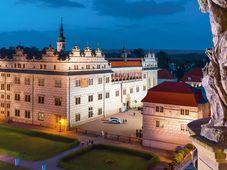