Ever since her award-winning debut novel All This Belongs to Me came out in 2002, Petra Hůlová has been a major voice in Czech fiction. The book went on to be translated into many languages, including English, and became a huge success for the then twenty-three-year-old writer. Now, thanks to translator Alex Zucker and Jantar Publishing, English readers can enjoy another of Petra’s novels. Three Plastic Rooms is written as the monologue of a prostitute as she approaches middle age. It is totally absorbing – acrobatic in its language and humorous and disturbing in unexpected turns. David Vaughan went to the unlikely setting of a former factory on the edge of Prague to talk to Petra Hůlová in her studio. Petra Hůlová, photo: David Vaughan I’ve come to the Prague district of Smíchov to join Petra in her workplace, which is rather an unusual place for writing.

“Yes, and I’m very happy that you’re here and that the book has just been published…”

And just to explain – in order to get to your little room here, which is on the top floor of a former factory, you have to climb up two ladders and then shut a trap door.

“This small place used to be a photographer’s darkroom, so it was all covered and there were no windows. It’s really very isolated and I feel here as if in some kind of spaceship or something. I love to work here; it works pretty fine for me.”

It makes me think of Virginia Woolf’s famous essay, “A Room of One’s Own” – an ideal space for being able to write creatively. Is that what you feel in this space?

“Exactly. It depends what kind of writer you are. There are many writers who prefer to work in their kitchen or in their apartment, but at home I would just get disturbed by dirty dishes and dirty socks and all the mess around, so I love to come here, because here I can switch into another mode of being and it just feels very good.”

With nothing but the hum of the traffic in the background.

On the subject of rooms, the title of your book in English is “Three Plastic Rooms”. In a sense the three plastic rooms are for the narrator what this room is for you, the place where she feels secure and at home, where she can do her job. The difference is that she is working as a prostitute.

“Yes, the narrator works as a prostitute and the book is her monologue. It’s not like a sociological or psychological analysis of life of a prostitute as a victim or something, it’s more like an inner monologue of hers, full of her sexual fantasies and thinking on the matter of gender from a slightly different perspective than we are used to.”

The whole book is a kind of stream of consciousness. When you were writing the book, did you just think yourself into her mind or did you spend a great deal of time researching, looking at how it would be to be in her position, and try in a very systematic way to create her mind in your own mind?

“Well, I’d been to a couple of brothels before I started to write the book, but it was not really because of the book. I just went there out of curiosity. For me is was more an opportunity to put on a mask in order to switch perspective a little bit and immerse myself into this stream of consciousness. I wrote the book very quickly – I think in two weeks – in Saint Petersburg, where I went because I had the idea that I wanted to write in the city of Dostoevsky – quite a funny romantic idea – and I think that this rush, this pace in which the book was created, is still there. I think it’s a pretty energetic, fast stream of consciousness.

… Dump out any one of the drawers in my desk and you’ll have material lined up like beads on a string. Every scuffed and used little item in there is a story, and a hairpin with a year-and-a-half-old fistful of hair could be two, even four, because the human body reeks of intrigue from a hundred miles away, and a story is one long thread of problems, everyone would get bored otherwise. I enjoy stories of broken hearts too, even if I don’t know the people, they’re made-up, so they aren’t instructive, so there’s actually no reason to care.

Reading the book, I really felt as if you had become the narrator. Is that how you felt when for two weeks you were completely absorbed by writing the book?

“I often use the first person in my books. I often kind of become the character and imagine being the character. That’s how I like to work. So, yes, in a way I changed myself into her.” 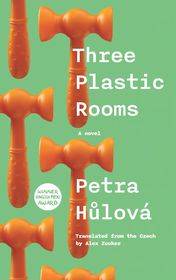 Photo: Jantar publishing It is not the first time you have chosen a narrator who by the rules of conventional morality would be scorned or looked on with a degree of suspicion. In a previous novel you had a narrator who was what you might call today an “unreconstructed communist”. Here you’ve got the prostitute. Do you think that is something that we are bad at doing in our society, at thinking ourselves into the way that another person experiences the world around them?

“Writing is a way of communication for me. It’s a sort of dialogue with the reader and I like to push him or her out of her comfort zone a little bit, to disturb and provoke. So I like to choose a character or become a character, a narrator, that it is difficult to agree with, but who on the other hand is also interesting. It’s ambiguous. Ambiguity is very important for me, this discomfort that I try to make for the reader.”

There are some scenes that really are uncomfortable to read. There’s a very prominent scene describing a paedophile act, where the narrator is imagining a man abusing a child.

“She hates men who abuse children, and she has a private battle against them, but at the same time she is well able to imagine that this can be a very appealing thing. Again, it’s disturbing. You as a reader have to cope with that somehow, and for me as a writer it’s also interesting because it touches certain forbidden zones. It touches certain edges, and that also relates to what writing is about and how we use our imagination, and what are our borders. It’s very complex.”

The thing that I most enjoyed about the book is the language, the way that you have given a life to the language of fantasy, or the narrator’s world within her three rooms, which is immensely rich. The language is full of quirky metaphors and it drifts from fairly realistic description to fantasy scenes which at times make you laugh out loud but at other times are very disturbing. That seems to me to be at the heart of your writing – relishing the wealth of language and experimenting with language.

“Language is important for me, but should be for any writer, and it’s my tool. But I would say that it’s always a tool that carries a meaning and is there to enhance the meaning or be with the message of the words – a certain, possibly disturbing, relationship.”

There is a provocative element to the novel. Did you find that there was a lot of interest among Czech readers when it came out, and was there also a lot of misunderstanding of the book?

“There are people who like the book and there are those who don’t. What I was a bit disappointed by was the reception of the book among literary reviewers, because their reviews were pretty shallow. The positive ones were praising the innovative, rich language and the negative ones were criticising the fact that there was no clear plot and that the setting is unclear and that it’s chaotic, but nobody really wrote about the issues of gender or the morality of the book or the problematic part with the paedophile scene, which is pretty strong. And that was a disappointment for me.”

My molded plastic three-room suite has no kitchen-slash-living room, no woman preparing instant meals, and no man on the couch thinking who knows what, I won’t even try to imagine. Where they might be and how many of them, in their coalliances, and how many times a week they bang, and whether they take a hard stand on that, or have hard feelings toward each other, or if the man ever gets hard anymore, since the woman hardly comes from behind the counter, and though it seems like things around there are hard enough as is, under the duvet at night it’s barely hard at all, so as creator of the show I have the right to say scratch that when it comes to my TV mystery series.

Your narrator has her three plastic rooms, her home, the place where she works, where she feels that she’s under control. Do you feel that she is really in control of her life? She is doing a job for which she is dependent on the goodwill of the men who are her clients and on being able to trust them. There is a constant element of danger, there is a constant factor of power; there is also the financial transaction involved. You mentioned the ethical questions around this. Do you feel that she is free in the world that she is living in?

“It’s difficult to say and I don’t want to generalise. Definitely her happiness and wealth are limited by her age and by her ageing. She cannot carry on working as a prostitute into her old age.”

Three Plastic Rooms is published by Jantar Publishing in London, in an excellent translation by Alex Zucker. You can also read his translation of Petra’s first novel, All This Belongs to Me, published in 2009 by Northwestern University Press.

“Yes. Ageing is also a matter of concern for her and one of the topics of the book – women’s fear of getting old. So, her stable and let’s say happy existence is definitely limited by ageing. That’s for sure.”

One of her obsessions is the thought of menopausal women sweating profusely and carrying large numbers of spare blouses in their handbags – a quirky image which comes into her mind again and again. This is the spectre of her own future, isn’t it?

The Grandmother: the book that every Czech knows

The Grandmother by Božena Němcová is an iconic work in Czech literature. The novel about an idealized rural community in the early…