There is a long tradition of poets writing about Prague, such as Jaroslav Seifert and Vítězslav Nezval, and I was interested to find out how contemporary, rapidly changing, Prague has inspired one of the most interesting poets of the younger generation to find new ways to express the spirit of the city. Vít Janota has written a collection called, Praha zničena deštěm or Prague Destroyed by Rain, and its subtitle is Praga caput regni, the ancient Latin motto of the city.

Vít Janota's new collection offers a contemplation of various areas of Prague, from Wenceslas Square and the Jewish Quarter in the centre, to the tower blocks, or so-called "paneláky", of the suburbs. And I went to such a suburb in Stodůlky, to meet with the poet in his home to find out more about his poetry. I began by asking him why he chose to write about the city.

There were warehouses and cheap pubs in the centre and almost no tourists. And it’s changed dramatically; Prague is now changing into a modern, contemporary city - all this Disneyland for the tourists in the centre. It’s inevitable, I know, but I’m somehow nostalgic, and just wanted to preserve the memory of the whole of Prague and somehow deal with what happens now.”

Is this nostalgia the result of so many changes happening so intensely in such a short period? Because you’re still a young man to be writing poems that have this real intensity and weight and impact in terms of the nostalgic kick they have.

“Of course, it’s a special time now in Prague. It was frozen for some fifty years and now all this energy, which was hidden in the city somehow, suddenly bursts out and it’s changing everything a lot.”

If I could ask you to read a poem please Vit.

Thank you Vit. And do you find that the sense of this connection with Prague, I mentioned earlier Seifert, Nezval, the very close connection these writers had with Prague, do you think that’s somehow threatened by the fact that Prague has become this number one tourist destination and is full of people who are just passing through?

“Yes, I think so. That’s one of the reasons I wrote this book. I wanted somehow to renew this connection, to preserve this connection with the city and to find a city of my own.”

You’ve described this collection, slightly ironically, as a guide to contemporary “magical Prague”. And you’ve also mentioned the big influx of tourists in the last years. On the whole, are you happy about the changes? Or do you think the nostalgia for what’s been lost is overwhelming?

“Well, as I said, they’re inevitable and I’m not against them. I get the feeling that though sometimes the city’s a little dirty or wild, it has a life of its own, and nobody dictates this life, only the people who live in the city, and so it goes.”

In this collection, which was the last of yours to be published, there are ten sections dealing with different areas of Prague, and in the end, in the epilogue, you mention the relationship between Prague and two other major Czech cities, Brno and Ostrava. And this somehow reflects the way Prague’s status or situation has changed.

“Yes, it’s a special thing this relationship between Prague, Brno and Ostrava. Because Brno and Ostrava feel that they live in the shadow of Prague, that everything is focused on Prague, that Prague is in the sun. And they are a little upset by the situation. But I think that to live in the shadow can have some advantages. Prague also lived in the shadow of Vienna for several hundred years. And these were the times of magical Prague, of the real magical Prague, of the Golem and all these funny myths. And maybe now in the sun it’s vanishing a little bit. Maybe we’ve now got ‘magical Brno’ and ‘magical Ostrava’.”

Or maybe it’s in the suburbs, the places that are less frequented by the casual visitor or the tourist? Are there any places in Prague outside of the centre you find particularly “magical”?

“One of the questions I wanted to find the answer to was whether this “magical Prague” still existed, or whether it’s just a cliché for tourists. And I found really magical places, but out of the centre. Because in the centre it’s really hard to find these because of all the tourists. But some other quarters, for example in Nusle or Žižkov, which are a little bit off-centre, these are really nice and really magical now and I would recommend them for a visit, though not for everyone.”

No, you don’t want to attract all the tourists or the magic might be driven further. I’d like now to read one of your poems. You’ve just returned from the Gerard Manley Hopkins literary festival in Ireland, so fortunately a number of your poems have been translated. And these are from your latest collection, which is yet to be published, called Minium Fields.

The rift
we will forever
carry in ourselves

This poem is interesting as it gives a clue to your scientific background, the vocabulary you use. How much has this been an influence on your poetry – I think you studied molecular physics?

“Yes exactly, I have a PhD in Molecular Physics and this education is still visible in my language, and I like this scientific language because it’s really exact. And all my relatives are doctors and I also use some words from medicine. And especially in the Prague poem I developed a special language, a mixture of poetic visions and scientific terms.”

So let’s have another of these new translations.

Maybe
some things
just happen
without a deeper
hidden meaning

There’s also a lot of humour in your poetry, and in fact the title of the whole collection is a joke.

“It’s an untranslatable Czech joke. Because the Czech book has two titles – Praha zničená deštěm, and the subtitle is Praga Caput Regni, which is Latin and the translation is something like “Prague, head of the kingdom”. And the joke is that it was translated by a student and he said, Praga is Prague, it’s OK, and caput is from German, it means something is destroyed, and regni, that’s rain. So he translated it as Prague destroyed by rain.”

Do you see in writing your very personal lyrics that you can combine this somehow with bearing witness to the many changes that are happening around you, particularly in Prague.

“I think like any poet in the world I feel something of an alien, standing out of the mainstream. And so I’m a sort of witness. And I think it’s maybe my mission to somehow preserve the memory of these changes and it also somehow helps me to find a way.”

Your interest in Prague has extended and become something of a family affair because your brother Jan has been taking photographs to illustrate your poems about Prague. And you’ve also been collecting the sounds of Prague and have started to put them all together in a combination of visual, aural and literary expressions.

“We are preparing this multimedia project, a reading of my poems with photographs and sounds of Prague, and we’ve already tried this and found it interesting and our intention is to prepare the whole of this book as a multimedia evening.”

Can you tell me a little about the sound record of Prague?

“It was originally for Czech radio, it was a recording captured by a man from Plzeň called Dominik Mačas. And we were just walking round Prague and he was recording everything, and the result was really interesting. It’s something like a sound diary of contemporary Prague, or everyday life, as he recorded underground stations and people on the street. It was funny, but interesting." 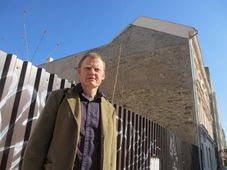 Vít Janota: The rebirth of the city built on sand

Vít Janota is a poet of Prague. The city emerges again and again in his work, and more than ever in his latest collection, which in…