Rudolf Formis: a tale of murder, intrigue and radio in pre-war Prague

On 24 January 1935 one of the pioneers of radio in Germany was found lying in a pool of blood in a hotel room south of Prague. His story is one of the strangest and least known episodes in the years running up to WWII. In this week’s Czech Books, David Vaughan picks up the story. Photo: Bundesarchiv, Bild 102-04051A / CC-BY-SA Last year I was looking through a box of old books that my wife and I were thinking of throwing away. I stopped briefly at a rather heavy tome in German. At first sight it didn’t strike me as particularly interesting, with the slightly obscure title, “The Resistance in South-Western Germany 1933-1945”. But then, opening a page more or less at random, I came across two words that made me look a bit closer. One was “Prague”, the other “radio”. It was just one chapter, written by the historian and journalist, Bernd Burkhardt, but what emerged was an extraordinary story of spying, intrigue and murder. I decided to find out more.

When Hitler came to power in Germany, one of the first things he did was to take control of the media, and radio was top on the list of his priorities. His propaganda chief Goebbels was only too aware of the huge potential of radio to reach and influence millions of people simultaneously. As he put it, “Radio is the most influential and important intermediary between a spiritual movement and the nation, between the idea and the people.”

He was also well aware of radio’s ability to cross frontiers, and spread the Nazi ideology, including broadcasts in English.

But there was also propaganda coming over the airwaves into Nazi Germany and, oddly enough, some of this propaganda was coming from someone who had once been a close friend of Goebbels. In the early days of the National Socialists in the mid-1920s, the Bavarian politician Otto Strasser had been one of the most prominent members of the NSDAP, but by 1930 he had fallen out with Hitler and Goebbels, and was expelled from the party. He set up his own fascist grouping, called the “Black Front”, but it offered little real competition to the Nazi Party. With Hitler’s rise to power three years later the Black Front was banned, Strasser went into exile in Czechoslovakia, and in 1934 the remains of the anti-Hitler opposition within Germany’s far right was crushed in the “Night of the Long Knives”.

Strasser busied himself organising anti-Hitler opposition, and in spring 1934, a man called Rudolf Formis turned up at his door in Prague. This marked the beginning of an attempt to subvert Hitler on the airwaves.

Rudolf Formis had been a radio pioneer. Based in Stuttgart, he was responsible to setting up the very first broadcasting in south-western Germany back in 1923. He went on to become technical director for South German Radio. This is how Strasser himself later described him in his autobiography:

He had a broad grin like a full moon and a great bulging tum. He used to love describing himself as a ‘ball’. His round contours were squeezed into the gear of the SA… He also had amazing powers of invention. It wasn’t an exaggeration to call him a genius. He was the first German to obtain a shortwave broadcasting licence. He loved shortwave as a groom loves his bride. 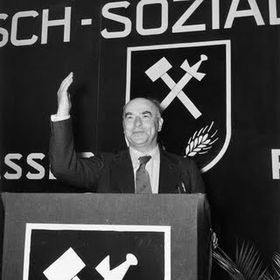 Otto Strasser, photo: ScwarzerFront, CC 3.0 license On 15 February 1933, two weeks after coming to power, Hitler gave a speech in Stuttgart, which was to be broadcast throughout the Reich. But something went wrong.

The transmitters went silent. As technical head of the radio in Stuttgart, Formis was held responsible, but an investigation concluded that it was just an unfortunate technical hitch. Talk of sabotage persisted, and when he arrived in Prague, Rudolf Formis, quickly spread the story that he was the one who had put a spanner in the works. Later this was shown to be a complete invention. In fact, the sabotage had been the work of communists, but it was a myth that suited Formis well. And it certainly was true that the Nazi political police was already beginning to take an interest in this man who was clearly eccentric, and, as they found out, had a Jewish grandmother.

On coming to Prague, Formis offered his services to Otto Strasser, and on 10 September 1934, he came round to Strasser’s Prague flat with a crate. Inside was a portable radio transmitter. This is how Strasser later described it.

I’d always imagined a transmitter as being about the size of a small power station and could hardly believe that Formis wanted to fight Goebbels using this tangle of spirals, wires, valves, plugs and screws. ‘If you want,’ he assured me, ‘we can start straight away. All we need is a good site, preferably a quiet place outside Prague, but not in the mountains.’

They chose a small country hotel in the picturesque rolling hills south of Prague. It was called the Hotel Záhoří, and was close to the village of Slapy on the banks of the Vltava, a spot that has since completely disappeared, having been later flooded to make the Slapy reservoir. I pick up the story with Otto Strasser’s – less than reliable – autobiography published in 1969.

The place was perfect. Formis was bubbling with enthusiasm even more than usual. The hotel owner had offered a good price for a long-term rent – Formis had told him he was an inventor and wanted somewhere quiet to work on his technical innovations. All went smoothly. “Hello, hello! Here is the Black Front transmitter on shortwave 48.5 metres,” came over the air a few days later – and that’s how one of the most dramatic chapters in our struggle against Hitler began.

Hotel Záhoří With an aerial sticking rather conspicuously from the roof of the hotel, Formis would broadcast every evening from seven until three in the morning. The broadcasts included the latest news, as interpreted by Strasser’s people in Prague, together with commentaries and a weekly report by Strasser himself. Strasser warned Formis that the Gestapo would be on his trail and gave him his Browning, telling him to keep it close at hand.

Of course it didn’t take long for the German monitoring service to work out where the broadcasts were coming from and to recognize Formis’s voice. Initially, they played the diplomatic card; the foreign ministry sent a diplomatic note via the German Embassy in Prague, calling on the Czechoslovak authorities to intervene to stop the broadcasts:

It has been established that this transmitter has been set up on Czechoslovak territory. Therefore, we request the Czechoslovak Government to ban this broadcaster, which is the propaganda core of the so-called ‘Black Front’, which has been declared an enemy of the state.

The Czechoslovak government wanted to have nothing to do with the whole business, considering it a purely German affair, and ignored the note, along with a second aide-memoire that followed. At this stage, the Nazi Sicherheitsdienst – the security service – became involved. It was headed by Reinhard Heydrich, who was later was to play such a dark role in Prague during the wartime occupation. Ironically, given that he himself was later assassinated in the city, Heydrich gave orders to a security service thug called Alfred Naujocks, to assassinate Strasser in Prague. For whatever reasons, Naujocks and his accomplice Werner Götsch returned empty-handed, to which Heydrich is said to have responded by calling him a “Schweinehund” and a coward. He gave them a last chance and fresh orders – this time to knock out Formis’s broadcasts, and bring Formis himself back to Berlin. 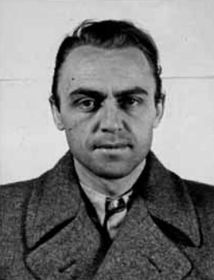 Alfred Naujocks The rest of the story could be taken straight from a spy novel. At some point in January, a dark blue Mercedes, with false Kiel number plates, crossed the Czechoslovak border. There were two passengers: Naujocks, travelling on a false passport under the name Hans Müller and Naujocks’ girlfriend, the Berlin gym teacher Edith Käsbach. They were disguised as tourists, and their luggage consisted of rucksacks and skis. They booked in at the Hotel Záhoří, where they quickly ingratiated themselves with their fellow guest Formis, who told them he was a Czech of German origin and inventor of an automatic salt grinder. Naujocks followed him in the evening, as he went upstairs to switch on the transmitter. When he caught a glimpse of the machinery through the open door, he knew for sure he was in the right place. Unobserved he managed to make a wax print of the key. Next day he went to Prague, and flew straight to Berlin to inform his superior in the Sicherheitsdienst. He was provided with a copy of the key and with acid to destroy the machinery, and then flew straight back to Prague with Götsch.

Naujocks and his girlfriend booked in again at the Hotel Záhoří. Bernd Burkhardt picks up the story.

The plan was that while Formis was out, Götsch would climb up a rope into the room from outside, to put the transmitter out of action. Naujocks would go into the room and wait. When Formis returned, they would use chloroform to make him unconscious and then kidnap him. But the plan went wrong. Formis was sitting in the room that was supposed to be empty and he fired at Naujocks the moment he opened the door. After a struggle and a further exchange of fire, the fatally injured Formis was left lying in a pool of blood. During the exchange, a spark hit the transmitter which had been dowsed in acid, and it went up in flames with a kind of explosion.

Naujocks, Götsch and Käsbach made a hasty exit, telling the terrified hotel staff not to report what had happened. By the time the crime was reported, at around midday on 24 January 1934, they were well on their way back to Germany. The next week the exile German communist newspaper, the “Arbeiter Illustrierte Zeitung”, which was based in Prague, published a report on the event, illustrated with photographs from the scene of the crime. It ended with the words:

What does all this mean? That murder, as the political weapon of a bankrupt clique, is to become a permanent institution. The isolated incidents of today and yesterday will be repeated on a large scale: in war!

The newspaper was certainly right on that score. Prague sent a diplomatic protest note to Berlin and was promptly informed that the German authorities had had nothing to do with the whole affair. Of course nobody believed this, and from then on, the Prague-based German opposition to Hitler –whatever its political colour – was a great deal more careful.

This is not quite the end of the story. Four-and-a-half years later, the unscrupulous Alfred Naujocks was once again to prove useful to Nazi Germany, and again it was on the orders of Reinhard Heydrich. On 31 August 1939 he led the incident that directly preceded the German invasion of Poland. He led a group of German agents, dressed in Polish uniforms, to take over the Gleiwitz radio station, close to the German-Polish border, but on the German side. In an attempt to make the attack look like the work of Polish saboteurs, they broadcast an anti-German message in Polish. This was the most conspicuous of a series of incidents, aimed to look like Polish provocation, as a justification for the invasion. Naujocks was later to describe the whole incident in detail during his trial in Nuremberg in 1945. Not long after the war he escaped from an internment camp and lived out the rest of his life as a businessman in Hamburg, without ever being exposed. He died in 1966.