Thor Garcia: Do what scares you the most

There has been an English-language literary scene in Prague ever since the fall of communism and in Czech Books this week we meet one of its central figures. Thor Garcia’s writings include some vivid and provocative evocations of a seedy, beery and beautiful Prague, to be found in his collection of stories, Only Fools Die of Heartbreak. The book is the focus of his discussion with Pavla Jonssonová. 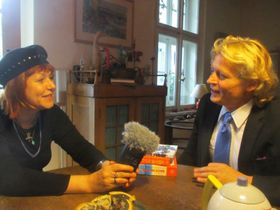 Pavla Jonssonová, Thor Garcia, photo: David Vaughan Today we will be talking to Thor Garcia, the witty, eloquent writer whose dream when he was young was to pocket at least one Pulitzer by the age of thirty and to be the editor-in-chief of the New York Times. Thor Garcia started a stormy career in the US as a journalist, which he describes in his novel The News Clown. However, since the mid-1990s he has lived in Prague and become part of the literary circles here, publishing with Litteraria Pragensia and Equus and playing in a rock band.

So, what brought you to Prague? Is it the bohemian lifestyle that we Czechs enjoy?

“Absolutely. That was a big part of it. I first came here in 1992. Friends of mine had started a newspaper called Prognosis and they said, ‘You definitely have to come to Prague. It’s unlike any place you’ve ever imagined. Come and check it out. And I did, and they were right. It was unlike any place I’d ever been. It was full of pretty girls and the cheapest beer and magical, fantastical places. It seemed that there were no rules, no authorities. The old communist system had broken down and people were doing to a large degree whatever they wanted. One thing led to another and I met a Czech girl and we were back and forth from the USA to the Czech Republic for a while. Then we got married and moved here and never looked back. “

Let’s start by discussing your work Only Fools Die of Heartbreak, since it has many scenes from Prague pubs and bars, capturing this kind of wildness. Could you read us an extract?

“This is from the story Hedgehogs in the Fog:”

It was still early, about 2:20 or so. I went up to the big drag and saw a night tram on the way. Super. I figured to ride it on up, then stop in at my non-stop for a bag of bottles to get me through the rest of the night.

I got on. The damn thing was crammed full – mostly young people. How horrible they were. Pushing up against me, the stink of them – the fat horrible pimpled faces, smelling of beer and the revolting gyros, the ketchup pizzas, the horseradish and tartar sauce that the street vendors shoveled up after midnight. Their lips were greasy with the stuff. And stupid hats, dumb combat boots, shaved heads and earrings, old army jackets, pigtails, camouflage pants, marijuana-leaf tied-dyes. Ghastly over-fed tubs leaning over midget four-eyed girls. Guys with hunting caps and goatees, sickly red faces mumbling at each other, awful frizzy hair in bandannas. Dreadlocks. Cloudy eyes and blotched skin, dreadful dyed hair, smeared lipstick. Obese guys with multiple piercings of nose, lips, ears. 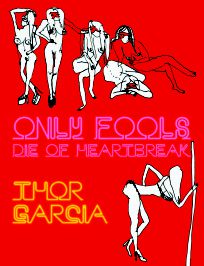 “You know, I’m just a reporter. You wouldn’t put me on the list of people who are big fans of humanity in the general sense. I’m not going to be in the cheering section. What can you say about people?”

Some of them are nice.

“The key word there was ‘some’. You’ll definitely see that as a theme running through most of my stuff.”

You started working with Prognosis. How did your connection with the Czech literary scene then continue?

“I’d known since I was a teenager that I had wanted to write, but how do you make a living at writing? So journalism was what I did through college and then professionally. After Prognosis closed in 1995, I was casting around for work and I just threw in my application and got hired by Radio Free Europe. I ended up staying there for nineteen years. We had two young children and through most of those years I wasn’t part of any literary scene at all. Really it’s a story of not much happening, working alone at night, crashing into the hard walls of failure over and over, and then the marriage collapsed and the proverbial ‘one door closes, another door opens’ kind of thing happened. And that was a good five or six years ago.” 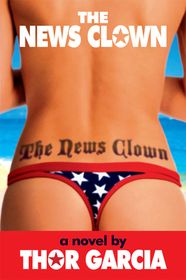 Photo: Equus Press “As I mentioned, my life went through some very convulsive changes. I look on a writer as someone who really doesn’t know what’s going on in his or her own life. They’re writing it down to try to make some sense of it, to make it better, to make it worse, just to makes some sense of their life. And so, I found myself addressing some of those questions in the stories. But also to me the most important thing a writer can do is be funny. I don’t care what you’re writing or from which culture. For me the best writing is always ultimately the funniest writing. And I don’t mean in a comedy slapstick sense, but I mean something that really, really strikes you deep in your heart or your soul: ‘That is funny.’ It can be black humor, it can be absurd. And so that’s what I like to strive for.”

And so, who is Cleo? Is she some kind of contemporary Justine from the Marquis de Sade? Or is she a sort of fifteen-year-old Brigitte Bardot, a kind of sex symbol, an archetypal sex slave? Who did you have in mind?

“A lot of our world and even relations between people are really governed by things like violence, coercion. It’s for survival reasons that we tend to ignore it in a lot of cases. But I liked the idea of this idealized figure. She comes into hard times and is forced into prostitution, and all these horrible things happen. And she sees the need for political change in her society, but, as we so often see in history – both recent and older – revolutions are always corrupted and destroyed. That story happens nowhere in particular. The time and the place are not specific at all. And so, it was experimental in that way as well.”

Another part of your literary career is writing lyrics for the Face Tigers. Is that right? 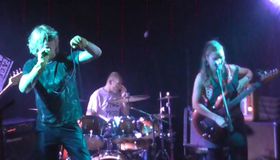 Face Tigers, photo: official Facebook profile of the band “I am the singer for the band called Face Tigers. We’ve been doing it for about five years now and it’s a punk, grunge, hard rock kind of band. When my marriage fell apart I had to recreate a new reality for myself. I had never been a musician, I had never sung in a band, I had never been a very good public performer, and I kept being pursued by this idea of – ‘Do what scares you the most.’ And I had always wanted to be a singer and be in a band, but at the same time it was the most frightening thing I could ever imagine. I idealized these rock stars and I wanted to be like them. I had this energy that I wanted to put into something. So, basically from scratch I called up some friends and was able to arrange a practice space and then I contacted a whole bunch of musicians and somehow out of the blue we formed a band. It’s a mix of Czech people and we’ve got an English guy and a Mexican guy and myself, and then Eliška is our Czech guitar player. So doing that was a whole new challenge, including writing the songs. And I do that together with Eliška.” 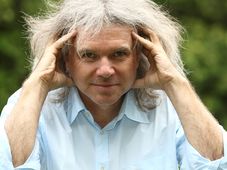