Vít Janota: The rebirth of the city built on sand

Vít Janota is a poet of Prague. The city emerges again and again in his work, and more than ever in his latest collection, which in a sense was written by the city itself. David Vaughan set out on a spring morning to meet Vít in one of the most distinctive and atmospheric parts of the city. 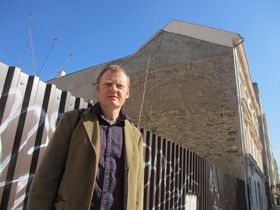 Vít Janota, photo: David Vaughan We are on Karlínské náměstí – Karlín Square – which is in the heart of Prague’s oldest suburb. Karlín dates back to the first half of the 19th century, although most of the buildings around us are from the second half of the century. I’m joined by the poet Vít Janota, who works just round the corner.

“It’s a lovely spring morning, which is why we stayed outside.”

The daffodils on the square are all in bloom…

“Yes. We’d planned to go for a coffee somewhere, but we’re here. Karlín can be considered the centre of Prague these days but it was the very first suburb in the beginning of the 19th century. It’s a neighbourhood where there are former factories and things like that, and cheap old houses. It changed dramatically in 2002 when there were big floods – up to three metres of water – and it turned out that Karlín was built on an unstable surface, on sand from the river. A lot of houses were damaged and the rebirth of Karlín began. Now it’s quite a cool neighbourhood, with a lot of fancy restaurants and so on, and it’s a really interesting place now.”

Let’s start with one of your poems, which gives this sense of the townscape.

“This poem is from my book called Minium Fields.”

There, somewhere in the dark,
where little bonfires burn like strange worlds
I saw in a single moment
the way leading to a landscape of pure joy

“Yes. It’s because I’m quite an optimistic guy, but also a bit pessimistic. That’s why I write poetry, because I somehow want to solve this problem, or at least describe it, and it’s a great adventure.”

Your very latest collection of poems is not only inspired by the city, but you have actually created poetry out of Prague street names, a lot of which are poetic in themselves…

“That’s true. It was written by the city. It’s the poetry of the city and not me. I really like Prague street signs and I always wanted to somehow deal with them. I had the idea to compose poems just from the names of the streets. It is possible in Czech, because we don’t add the word ‘Street’ or ‘Square’ after the name, so it is possible to put the names together and compose a poem from them.”

You have the book with you. It would be great if you could read one, and then we can talk about the names that are there. 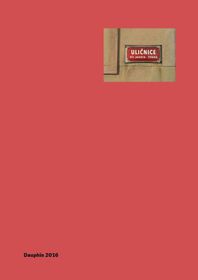 Photo: Dauphin And if we translate the poem: K beránku means “towards the lamb” and then Betlémská means “Bethlehem” – as an adjective – and then “towards Calvary”, “Jerusalem”, “Cross”. And because of the way the Czech language works, you can read them together and it makes sense.

“Yes, the Czech language is quite flexible and you can work with different forms of words, so there are lots of ways to work with them, such as homonyms, which sound the same but mean something different. And then I made quite long trips around Prague, to take snapshots of these and compose this book, not only from words, but also from photographs of these names.”

I wanted to ask you about the connection between these names, the meanings that they evoke, and the actual experience of walking in these streets. There is a long history of the poetry of the “flaneur”, the walker, going way back to Baudelaire. In this country we have Vítězslav Nezval. It’s the idea of the poet wandering through the streets, observing the city. I have the feeling that you are very much that kind of poet.

“Yes. I love walking. It’s my biggest hobby, I would say. And this allowed me to see the city as a whole. I saw some incredible places in Prague that I didn’t even know existed.”

Let’s have another of those street poems, because they are so evocative and quirky…

It sounds like a drinking song. It could be translated as something like: “In the barrels, towards the good water, archive rye, consumer plum, ordinary midnight cooperation.”

There is a tradition in this country of poet scientists. For example, Miroslav Holub, one of the great poets of the second half of the 20th century, was a chemist. You fit very much into that tradition. You were a molecular physicist by education.

“That’s true. I studied physics. I even have a PhD in theoretical physics. Now I work as a programmer.”

Is the scientist in you present when you write – giving the poetry a molecular structure? 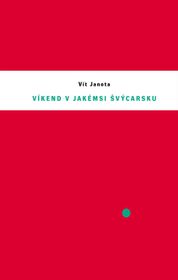 Photo: Dauphin “That’s a difficult question, because for me poetry is an emotional and not a rational thing and it influences the emotions if you read it. So the emotions are the most important thing for me when I read poetry and when I write poetry. My work regarding poetry, if you can call it work, is not rational. My books are not prepared in advance; there is no prepared structure. I simply write when I want to write and when there is an inspiration. I would say it is a mystery even for me, being a scientist and a poet together.”

Another of your most recent collections is called “Víkend v jakémsi Švýcarsku” – a weekend in some kind of Switzerland – which again is a very evocative title. Tell us about this collection.

You talk about travelling, but the very title of the collection – in some kind of Switzerland – suggests that it’s an uncertain sort of travelling.

“Definitely, it is. There is an area called Czech Switzerland, just on the border of the Czech Republic and Germany, but I found another Switzerland in Germany, which in German is called Die Märkische Schweiz and is close to Berlin. What’s interesting is that it’s a totally flat landscape and very lovely. I really liked the place, because there was almost nothing, but it was very nice somehow. It seemed to me a good title for this book.”

I wouldn’t describe your poetry as political, but it is engaged. You write about subjects that you care about. There’s one collection of your poems which could be translated as: “It’s not enough just to recycle your rubbish”, which in its very title suggests a political or environmental standpoint.

“That’s true. In that particular case the whole book is one poem. It has more than eight hundred verses. It somehow deals with our current world, the problems we have in it, and in a sense it’s very political. And I find that normal. Poetry should work also with what’s around us and somehow deal with it.”

Would you describe the poem, at least in part, as a direct appeal?

Because there is a tradition, both in this country – albeit somewhat discredited – and internationally, of engaged poetry, appealing directly to people to see things differently…

“It’s true that it is mostly the communist poets who have this tradition of engaged poetry and it’s true that people don’t like it, but I didn’t want to appeal. I just wanted to say what I feel and say it aloud. I think engaged poetry is okay. I’ve got no problem with it. When it is good poetry, then it can be engaged, but most of the engaged poetry in the time of communism was really bad poetry. The only reason it was created was as a tool of political enforcement.”

We’ve talked about Prague. Often in your poetry you return to your love of Prague and also to your fears for Prague. 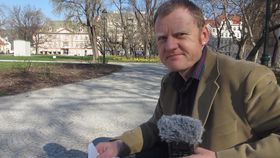 Vít Janota, photo: David Vaughan “I really love the city. It is such a nice city, but there are a lot of bad things happening here and I also wanted to deal with them.”

What sort of things do you mean?

And there is also the Prague of mass tourism, the kitsch, Disneyland Prague, which is something that you have written about very overtly in your poetry.

“But in a sense this world is inevitable. You can find it in any big city. It’s exactly the same everywhere: the same restaurants, the same shops, the same people, but fortunately most of Prague is without tourists. They never go there, or if they do go there they are the special kind of tourist who wants to see the real city. And that’s what interests me.”

Quite often in your poetry, there is an element that is almost apocalyptic. Are you an optimist for the future, or are you pessimistic?

“I’m an optimist, I would say. I have a family, I’ve got two children. I’ve got a job. But there are fears in me and maybe they come out strongly in the poetry. Maybe that’s why I write poetry, because it’s a way of getting rid of these fears.”

Let’s end with one last poem.

“Maybe it’s a bit apocalyptic, but I think it’s one of those that seem to be pessimistic, but for me are optimistic.

I saw the righteous
cut corners
in their rage

and also suicides
standing in orderly queues
for their pension

And your words are blowing like fluff over Karlín Square on a beautiful spring morning. 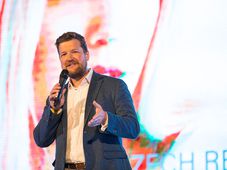 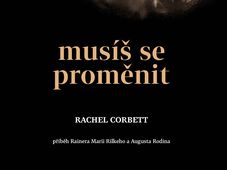 In 1902 the 26-year-old Rainer Maria Rilke went to Paris to write a monograph of the French sculptor, Auguste Rodin. By that time Rodin…