The lower house of Parliament on Wednesday approved the 2019 draft budget in its first reading. The basic parameters of the budget, such as the deficit goal, are thus definitively set with only minor shifts in funds possible. Government spending next year should prioritize the social sphere, investments, an increase in public sector salaries and pensions. 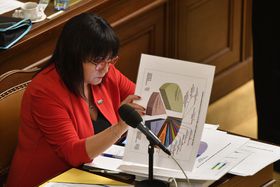 Finance Minister Alena Schillerová, photo: ČTK/Michal Kamaryt There was a round of applause from coalition deputies as the 2019 draft budget was passed by 101 votes in the 200-stong lower house. It won approval from the coalition ANO party and the Social Democrats, as well as the Communist Party which helped the government win a confidence vote in July.

The draft budget forecasts state revenues of 1.47 trillion crowns and inflows of EU funding of 48.6 billion crowns. It counts on a 40 billion crown deficit which, although it is ten billion less than originally planned, elicited sharp criticism from opposition MPs. Deputies for the Civic Democratic Party, TOP 09, the Christian Democrats and Mayors and Independents argued that a deficit budget at a time of strong economic growth was irresponsible and criticized the fact that the bulk of additional expenditures would go towards consumption rather than investment.

The prime minister countered that the budget was a sound and money would be spent on areas where an increase was essential and long overdue such as education, health, social services and pensions, all areas that had been neglected during the rule of opposition parties.

The Communists whose backing was crucial in the vote, said they had supported the budget’s basic parameters mainly because of the expenditures in the social sphere and the hikes in public sector salaries and pensions. They indicated that in the second and third reading they would insist on certain expenditure shifts in return for their continued support. Even so, serious complications are seen as unlikely.

After winning approval in three readings in the lower house the budget will only need to be signed into law by the president, who has already endorsed it. Under Czech law it does not need support from the Senate, where it would almost certainly have hit the rocks.