According to the internet news site Novinky.cz there are currently over half a million foreign nationals living in the Czech Republic. Approximately 224,000 of them are manual labourers, 80,000 are self-employed entrepreneurs. Analysts warn that while the country could do with more qualified foreign specialists, the labour market for manual workers is practically saturated. 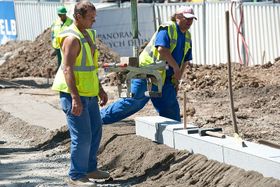 Photo: Filip Jandourek Novinky.cz has published a rough overview of foreign workers on the Czech labour market. According to statistics the number of foreigners living in the country has doubled over the past ten years to the present 500,000. Foreign nationals run a third of the country’s big businesses, predominantly German, French and Slovak nationals, who have moved here to start-up businesses or been hand-picked to lead the Czech branch of international corporations.

Approximately 45 percent of foreign nationals working in the country are from EU member states: Slovakia (160,000 people), Poland (25,000) and Bulgaria (12,000). The highest number of foreign workers from non-EU member states hail from Ukraine (127,000), Vietnam (58 ,000)and Russia ( 37,000). Approximately 50,000 of them have been granted Czech citizenship and many of those from poorer countries regularly send home money to help their families, amounting to an estimated 20 billion crowns per year.

The vast majority of foreign workers are unqualified manual labourers, only twenty thousand are qualified specialists and according to labour market analysts the country could do with more of them, particularly in the spheres of IT and health.

The number of job openings for manual workers is fast decreasing and experts warn that without a more thorough analysis of the labour market and an effective migration policy the country could be heading for trouble. They point out that more unqualified foreign workers will find it hard to get jobs and there is a real threat of them expanding the ranks of the country’s more than 600 ghettoes. The issue of meeting demand on the labour market has been raised not only in connection with foreign workers. Universities and vocational schools have been criticized for failing to employ labour market data in decision-making regarding what study programs they will open up and finding means of attracting young people to fields where specialists are lacking.