While Czechs are among Europe’s most prodigious consumers of beer, the percentage sold in the country’s pubs has fallen to a historic low. This has led breweries to push their own branded restaurants, linking the pub experience to sport and quality dining and introducing other innovations, the newspaper Hospodářské noviny reported on Wednesday. 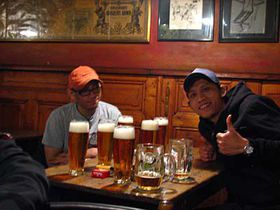 Photo: Kristýna Maková The Gambrinus beer brand has sponsored Czech soccer’s first division for the best part of two decades. But while it is planning to reduce its direct sponsorship of the league, Gambrinus – which is owned by the Plzeňský Prazdroj group that produces Pilsner Urquell – is still upping its football-linked promotions.

The 2014–2015 season in the Czech top flight got underway last weekend and Gambrinus was in on the action, offering half-litres at reduced prices at some 700 selected pubs throughout the country on Sunday.

Gambrinus plans to the same every Sunday when league games are played throughout the season. The brand’s marketing director, Miroslav Peichl, told Hospodářské noviny it wanted to extend the promotion to even more bars.

As well as a five-crown discount on the first 100 beers during games, Gambrinus is also planning competitions and other promotions on match-day Sundays.

Photo: archive of Radio Prague On top of these activities, Peichl said the brand planned to back “football pubs” with a unified look and decked out in club colours near the stadiums where the Czech Republic’s 16 first division sides play. Guest appearances by players at these hostelries are also planned.

Prazdroj, Staropramen, Heineken (owner of Krušovice) and Budějovický Budvar have in recent years focused on linking their brands to quality dining. However, sport-oriented marketing is part of a broader trend of breweries looking for innovative ways to push their own brand pubs. Hospodářské noviny said. 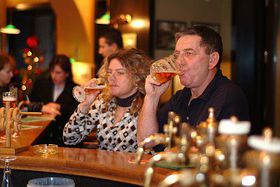 Photo: CzechTourism A key reason for this strategy is a decline in sales of beer in pubs and restaurants. Of every ten half-litres of the amber nectar consumed in this country last year, only four were purchased in pubs; the rest were bought at retail outlets. This is the lowest recorded percentage of pub sales.

Most brewery branded pubs in the Czech Republic are not, as they may appear, franchises. Rather beer producers sign individual contracts with operators and make a profit directly from sales.

The manager of Staropramen’s branded restaurants, Jan Trochta, told Hospodářské noviny that those businesses had seen a year-on-year uptick in sales of four percent last year and a seven-percent rise in visitor numbers.

Photo: Kristýna Maková Staropramen is regarded as a pioneer in this field with its modern Potrefená husa restaurants, one of which is even to be found in Prague’s Main Train Station. There are at present 30 “husas” and Staropramen plans to open even more.

However, the firm is also working on a new concept of branded traditional-looking pubs targeted in particular at the regions, the brewery’s general director Zbyněk Kovář told Hospodářské noviny.

Budějovický Budvar is not planning to introduce more of its Budvarka branded pubs, but the brewer’s boss Jiří Boček said it did plan to revitalise those that are already in existence.