The Czech National Bank said on Thursday that it would keep interest rates on hold at their current record low level of 0.05 percent. Officials also revised their outlook for Czech economic growth this year to 2.9 percent, up from the 2.8 percent estimate issued in February. 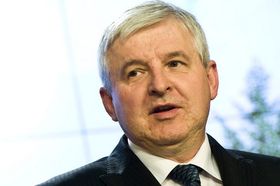 Jiří Rusnok, photo: Filip Jandourek Central bank governor Jiří Rusnok told reporters its board had been in complete agreement on maintaining interest rates at their current level. The decision had been expected by economists.

Mr. Rusnok said he expected interest rates to rise in the third quarter of 2017 and again next year.

For their part, economists say they don’t expect the central bank to start to raise interest rates until the second half of 2017 at the earliest.

Mr. Rusnok said any interest rate rise would be conditional on the development of all key macroeconomic variables, including the crown’s exchange rate.

CNB currency interventions kept the Czech crown at around 27 to the euro from late 2013 until early last month. Thursday’s monetary policy meeting was the first since the ending of that cap.

ING chief economist Jakub Seidler told the Czech News Agency that he believed the central bank would only start to raise interest rates in the second half of this year.

Marek Dřímal of Komerční banka told Czech Television that the development of the crown’s exchange rate would be the key factor as regards expectations of a rise in interest rates by the CNB.

However, Vladimír Pikora of Next Finance said betting on an early rise in interest rates was “crazy”, even on the assumption that the crown will not strengthen significantly.

Economist Radek Pavlíček of the Roklen group told Czech Television that some investors had been speculating on the hope that the Czech National Bank could make a surprise earlier interest rate increase, which would lead to the crown growing in strength.

This unjustified speculation was leading to a weakening of the crown, Mr. Pavlíček said.

The ECB’s approach means that the Czech central bank cannot make any fast moves when it comes tightening policy by increasing its own interest rates, Mr. Jáč said.

Mr. Zeisel said this was not happening at present so the CNB will soon have to reach for other measures, with interest rates its main lever in this respect. 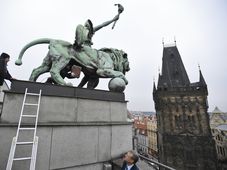