A report on the Czech Republic’s future demand and sources of coal looks like it could open the way for a deal on the thorny issue of whether current coal mining limits should be relaxed. Abandoning the limits at the Bílina mine is recommended while the case for the same at ČSA is undermined. 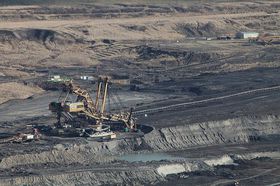 Photo: Tomáš Adamec A study commissioned by finance minister and ANO leader Andrej Babiš raises the chances of a compromise deal within the government over the question of whether to relax existing coal mining limits.

The unresolved question of whether to keep with the limits decided at the start of the 1990s or relax them so that mining of brown could continue at the Bílina mine, owned by ČEZ subsidiary Severočeské doly, or the ČSA mine, operated by Severní energetiká, caused the adoption of a new long term energy plan for the country to be stalled at the end of last year. Most other ministers stood up against Minister of Industry and Trade Jan Mládek’s proposal that the limits should be relaxed at least at Bílina and possibly also at ČSA, although the latter would probably entail the destruction of at least part of the town of Horní Jiřetin.

The study carried out for minister Babiš by Carbounion Bohemia on future demand and stocks of coal comes down clearly in favour of relaxing the limits for Bílina but concludes that no real case is made for the same to take place at ČSA. On the basis of that recommendation, it is possible to imagine Babiš and Mládek sealing a deal and the rest of the coalition falling in line.

The study points out that even if mining limits at both sites are relaxed this will not allow Czech coal consumption to continue at current levels of around 40 million tonnes a year. But the phase out of many older and less efficient coal-fired power plants means that Czech consumption is set to dramatically fall over the next decades.

And even if it did not, imports of coal from neighbouring Germany are already taking place and could continue into the future. The study highlights the fact that Czech heat and power company EPH is already sourcing most of the coal supplies for its Opatovice plant from Germany. And this knocks over the long sustained argument that Czech coal supplies can’t be imported and must be found on home ground.

The study adds that the ČSA coal mine is currently only a minor supplier to Czech heating plants, which are seen as most at risk if local coal supplies dwindle. The mine supplies 5-6 percent of current needs but the relaxation of the Bílina limits would probably be enough to prevent major supply problems in the next 30 years. In fact, it warns that it would be difficult to find outlets for ČSA coal if the limits there were abandoned and no new coal-fired power plants came on stream. If necessary, the limits question at ČSA could be opened up again in 10-15 years, the study adds. So, a coalition deal on the coal limits could be possible. That still though leaves the question of who should pilot construction and guarantee the financial case of for new nuclear plants to be solved before the long term energy concept can be sealed.