A third Czech power company has boosted the ranks of potential bidders for German power assets of Swedish energy company Vattenfall. In fact, Czech companies and joint ventures are the only bidders so far for the sizable portfolio of coal, hydro, and lignite mines. 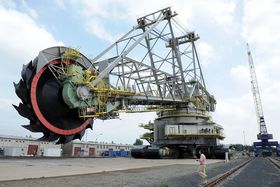 Photo: Filip Jandourek And then there were three. That’s the scenario now as a third Czech power company has joined the ranks of those seeking to sweep up the German assets of Swedish energy company Vattenfall.

Brown coal, or lignite, miner Czech Coal’s spokesman, David Vidomus, confirmed Thursday that the company has taken the first step in the purchase process by registering its interest and examining the sale conditions and assets.

Environment group Greenpeace which has announced that it wanted to take part in the acquisition process with the aim of getting the brown coal assets and closing them down, was excluded from the race earlier in the week.

That means that it’s so far an all Czech field in the race for Vattenfall’s coal mines, coal-fired power stations, and hydro power plants in Germany. Vattenfall wants to sell up so that it can present a cleaner image at home in Sweden and also because German energy policy looks long term like it will put an ever increasing squeeze on polluting brown coal. How severe and how quick that squeeze will be is one of the main questions making it difficult for all the bidders and the seller to put a very accurate price on the sizeable portfolio of power assets.

Czech Coal’s addition to the potential bidders probably caused some surprise outside of the Czech Republic, but the step has a telling logical which has underpinned the mining company’s policy for the last decade or so.

Put bluntly, Czech Coal, the operator of the Vršany, coal mine and a modest energy trader, has some of the biggest and longest lasting brown coal reserves, in the Czech Republic, which are estimated to be capable of lasting until 2060, but lacks the power plants to burn the raw material and turn it into extra cash.

Czech Coal in 2013 drew a line under a long running legal row with ČEZ by sealing a deal to supply its large Počerady with coal. As an extra sweetener Czech Coal was also offered the prospect that ČEZ might sell the Počerady plant some time down the line if conditions proved favourable for such a deal. ČEZ though has decided to forego the first opportunity to sell the Počerady plant to Czech Coal and the coal-rich company is therefore looking for opportunities across the border in Germany to burn its coal.

EPH is already exploiting similar opportunities having bought up a handful of German coal-fired power plants and lignite mines. It though has the opportunity of shipping German coal to its Czech heating and power plants if the need arises rather than delivering coal from the Czech Republic across the border to Germany.