In response to numerous complaints with regard to abuse of the Czech visa system in Ukraine, the Czech consulate in Lvov has moved to simplify and speed up the process. Steps have been taken to root out corruption by local middlemen who blocked the registration system, making it virtually impossible for anyone else to sign up for months. Applicants will now be able to book by phone, eliminating the long waiting lines outside the consulate and the waiting time for a visa should be reduced from 130 days to 75. 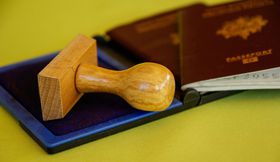 Jacqueline macou, Pixabay / CC0 Public Domain The Czech economy has a dire need of more foreign workers and workers from Ukraine are much sought after. Interest would match demand were it not for the fact that applicants face numerous bureaucratic hurdles or the road to getting a Czech work visa. Last year it emerged that middlemen had rigged the computerized visa appointments system so that anyone who wanted to try to get a visa had to go through them and pay exorbitant money for a place on the “blocked” waiting list.

There were likewise complaints about the hour long queues forming outside the Czech consulate. There were people waiting in line in order to “sell” their place to genuine applicants.

Steps have since been taken to correct that. The system is now operated by an external company (VSF Global) and people who want to apply for a short or long term work visa in the Czech Republic are able to book an appointment by phone. According to the Czech consul in Lvov the new system cannot be rigged.

The time that it takes to acquire a work visa has been reduced from 130 to 75 days. For many Czech employers this is still not enough. Fruit farmers, who have to rely on foreign workers to help out with the harvest, say that they face a severe shortage of seasonal workers. Ukrainians who would be willing to come and harvest the fruit go to Poland instead since a work visa to Poland takes just two weeks to acquire as opposed to the two months that it takes to get a Czech one.

There are also calls for the government to open the door to more Ukrainian workers per year. At present close to 20,000 Ukrainians a year can get a long-term work permit to the Czech Republic. The Czech Chamber of Commerce says the economy could use thousands more. And it points to Poland which flexibly arranged short-term work visas for 700,000 Ukrainians in 2016 alone.