Czech exports have soared in the ever growing Australian market

It’s been a bit of a bumpy ride, but Czech exports to far away Australia are booming with total export turnover having almost tripled in five years. Australia has not been one of the biggest exports for Czech firms in the past. Distance and the lack of many solid cultural and historical links were partly to blame but business now appears to be picking up in a significant way. 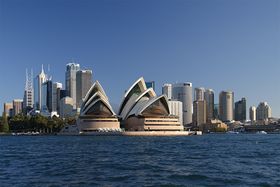 Sydney, photo: Matthew Field, CC BY 2.5 Czech firms have in the recent past tripled their exports to Australia. From the fairly modest total of 5.7 billion crowns worth of exports in 2019, the figure in 2015 climbed to 15.0 billion crowns. It has not been a steady rise, the figure for 2014 fell back to 12.3 billion crowns for the year earlier total of 13.3 billion, but the trend is clear.

One of the reasons for the Czech success is the fact that the Australian economy appears resistant to downturns. It has an uninterrupted growth record for 26 years running, one of the main factors for that its that its raw material richness has been plugged into ever greater demand from China and other Asian states. But domestic demand for goods has also surged.

The Czech success stories are varied. There is, for example, Brno-based Y soft with its software for the management of office printers. Owner Václav Muchna boasts that in spite of its 24 million population, the Australian market for his company is now four times as large as the domestic Czech one. And he points out that the extra bonus is that the profit margins in Australia are a lot more attractive than at home.

Another Czech firm making an unsurprising success in Australia is Photon Energy. Its offer of solar panels and equipment is on offer to an Australian market which is seeing a steady rise in demand for power against the backdrop of the closure of some conventional power plants. Photon Energy has sited solar power panels on the rooftops of houses and other buildings in Sydney. It is now looking to develop two major solar developments in the Australian country. Part of this development by the Czech company has been funded by a bond issue.

And the Čáslav-based aviation company Aeropilot is also eyeing the Australian market after its local dealers there landed civil aviation authority approval for the first light sports plane, the L 600. Drinks producer Kitl, based in Jablonec nad Nisou, is now selling its range of syrup juices in Australia. And Domažlice-based Kovobel has seen strong demand for its demountable, metal storage containers. One thing helping the increased exports is that fact that in spite of the high costs, many young Czech and students are increasingly looking spending study vacations or opting for language courses in the country with around 2,700 making the long journey to Australia for that purpose last year.