Czech Finance Minister and billionaire businessman Andrej Babiš has reacted with anger to a conflict of interest law which he claims was tailored to drive him out of politics. The self-made business tycoon, whose ANO party looks set to win the general elections in October, said he would transfer his assets to a trust fund in order to comply with the legislation, but would file a complaint against it with the European Commission. 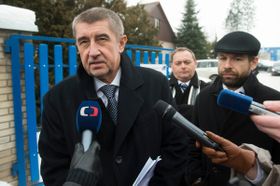 Andrej Babiš, photo: CTK The recently approved conflict of interest law, which is due to come into effect February 9, bans cabinet members from owning media outlets and bars companies where ministers have more than a 25 percent stake from receiving state subsidies, taking part in public tenders and accessing investment aid. Mr. Babiš who owns two major dailies, the country’s most popular radio station as well as a multi-billion crown business empire, fought the bill tooth and nail.

“Any expert on constitutional law will tell you that this law is in violation of the constitutional order. It is merely an instrument in political battle.”

The finance minister has already said he plans to lodge a complaint with the Constitutional Court of the Czech Republic, but in a debate on commercial TV Prima on Sunday Mr. Babis said he planned to take the matter further announcing that one of the 200 companies in his business conglomerate would file a complaint with the European Commission on the grounds that the new legislation violates European law.

“I will get rid of everything, including my media outlets, but I intend to fight for my rights, Mr. Babiš told Prima TV. I have the right to own property the same as any other citizen, I have the right to run a business and engage in politics,” the finance minister argued, stressing that he had never taken advantage of his position and had abstained in any voting where a conflict of interest could arise.

Mr. Babiš said that in taking the matter to court, he would not seek financial damages, he merely wanted justice. Martin Plíšek, from the centre-right TOP 09 party, which supported the law, countered that the law did not bar Mr. Babiš from owning property –it merely barred his firms from taking part in public tenders and accessing investment aid while he was in office. The leader of the Communist Party Vojtěch Filip, whose party likewise supported the law, said the considered the complaint with the European Commission a tactical move, aimed at bolstering Babiš’s position ahead of a Constitutional Court hearing on the matter in this country.

Meanwhile President Miloš Zeman, who vetoed the conflict of interests law on the grounds that he believed it to be in violation of the constitutional order, but whose veto was overturned by Parliament, has also said he may challenge the law in court.