The Czech machinery firm PBS has landed a contract to develop a micro turbine for a new Chinese jetliner. The deal with the Hongdu Aviation Industry Group was sealed during the visit of Czech President Miloš Zeman to China. 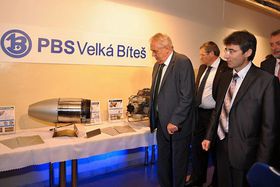 The value of the contract, concluded during Czech President Miloš Zeman’s visit to China, has not been revealed. The Czech firm should develop the turbine over the next three years, with serial shipments of the component set to start in 2020.

The micro turbine will serve as an auxiliary energy unit on the new plane, supplying electricity for the aircraft’s main engines, instruments on the flight deck, and the aircraft’s air conditioning system.

The new jetliner C919, the first such aircraft to be manufactured in China, is being developed by the Commercial Aircraft Corp of China. The Hongdu Aviation Industry Group is in charge of supplying several parts of the plane.

The firm PBS, which specializes in precise machinery, has already been cooperating with a number of Chinese airplane and helicopters. “Our contracts for the Chinese markets, along with deals signed for the coming years, have reached several billion crowns,” the company’s CEO Milan Macholán said in a statement.

The company is based in Velká Bíteš, in southern Moravia. Its revenues last year increased by around 100 million crowns to reach 1.2 billion crowns. The firm employs around 780 people.